Plenty of evidence exists of various personal items made from human skin in the 19th century. 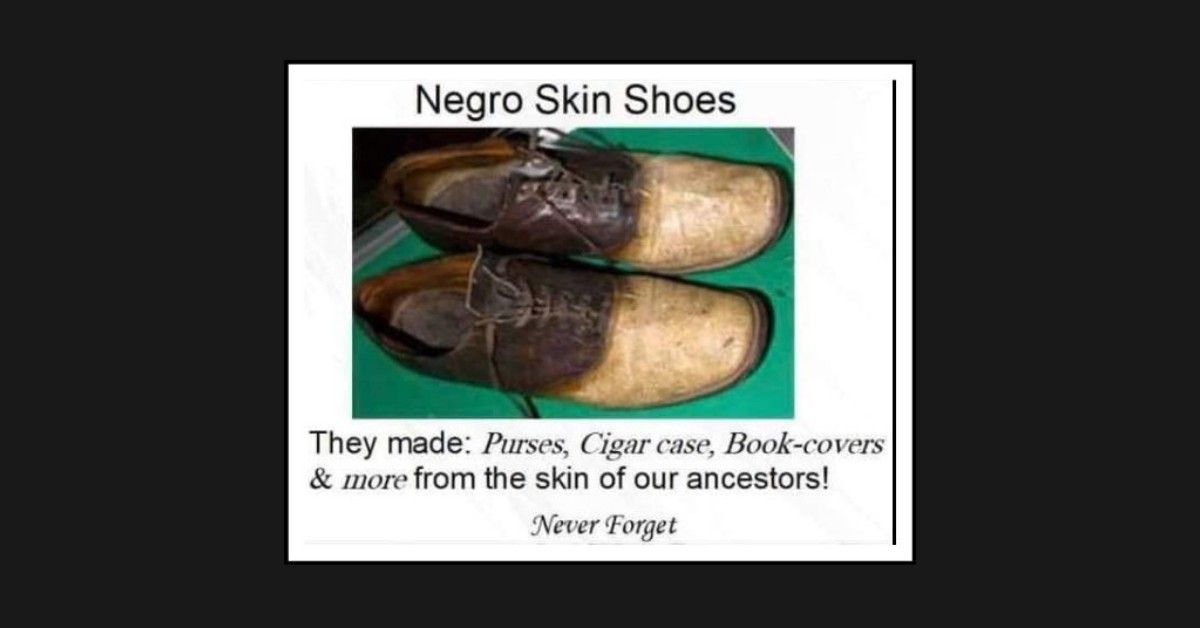 A viral photograph shows a pair of shoes reportedly made from the skin of a lynched criminal.

The shoes seen in this particular picture were not made from the skin of a black person, although such items did exist.

In March 2019, we encountered an image posted on Facebook that purportedly showed a pair of "negro skin shoes": This image captures a pair of shoes reportedly made with human skin, but the alleged "donor" in this case was not an African American man -- rather, it was said to be George Parrott, a wild west outlaw known as "Big Nose George": Big Nose George was a cattle rustler, highwayman, and general bandit who robbed and killed his way across the American West in the 1870s and ultimately met his demise after a failed jailbreak in 1881. An article published by the Eaton Democrat on 31 March 1881 described his lynching:

At Rawlins, Wyoming, the notorious Big Nose George was taken from jail by a party of masked men and hanged. The rope was adjusted to a cross piece on a telegraph pole and Big Nose George was made to climb the ladder set against the pole for the purpose of placing the rope about his neck. He climbed high on the ladder saying, "I will jump off, boys, and break my neck," and he did.

After Big Nose George's death, Dr. John Eugene Osborne performed a crude autopsy on the bandit in an apparent attempt to study the workings of a criminal brain. We're not sure if Osborne ever managed to find out what made Big Nose George tick, but the doctor did come away with a few bizarre mementos. According to Wyoming's Carbon County Museum, Big Nose George was tanned, and his skin was used for the uppers of a pair of shoes:

On March 22, 1881, while jailed in Rawlins, George made an attempt to escape. That night, vigilantes decided to ensure he wouldn't repeat the attempt successfully. They took him from the jail and strung him up from a telegraph pole. It took two attempts, but eventually the lynching succeeded and George strangled to death. No legal action was taken against the mob.

Dr. Osborne made a plaster death mask, then took the skin from Parrot’s chest and thighs. He had it tanned and made into a pair of shoes and other personal items.

The bandit's remains were also used to craft other personal items: for example, the top of his skull was turned into an ashtray. We reached out to the Carbon County Museum, where the shoes in this viral photograph and some of these other macabre artifacts are still on display, for more information and will update this article if more information becomes available.

We did turn up one report that described Big Nose George as being of dark complexion, but couldn't find any indications that he was of African descent:

Thus ended the earthly career of Geo. Parrott, who was undoubtedly one among the most desperate and dangerous criminals that ever trod the soil of Montana. He was about 5 feet 8 inches in height, complexion very dark, narrow, sloping forehead, jet black hair, and small beadlike eyes. His most prominent feature was his large Roman nose, from which peculiarity he gained the nickname of "Big Nose George."

While the shoes seen in this particular picture may not have been made from the skin of a black person, such items did exist. For instance, a brief story published on 30 March 1882 in the Atchison (Kansas) Daily Globe mentioned a physician who wore a "pair of shoes made from the hide of a negro." An article from the 29 October 1887 edition of the Oskaloosa Independent relayed a similar story:

I remember that two or three years ago I incidentally referred to a prominent physician of this city wearing shoes made from the skin of negroes. He still adhered to that custom, insisting that the tanned hide of an African makes the most enduring and the most pliable leather known to man.

Only last week I met him upon the street with a brand new pair of shoes. I looked at his foot wear, as I always do -- his pedal coverings have an irresistible fascination for me - and said, with a smile:

"Is the down trodden African still beneath your feet?" In the most matter of fact way, and without the shadow of a smile, he answered: " I suppose you mean to inquire if I still wear shoes made of the skin of a negro. I certainly do, and I don't propose changing in that respect until I find a leather that is softer and will last longer and present a better appearance. I have no sentiment about this matter. Were I a Southerner - in the American sense of the word - I might be accused of being actuated by a race prejudice. But I am a foreigner by birth, although now an American citizen by naturalization. I fought in the rebellion that the blacks might be freed. I would use a white man's skin for the same purpose if it were sufficiently thick, and if any one has a desire to wear my epidermis upon his feet after I have drawn my last breath he has my ante mortem permission."

The doctor's shoes always exhibit a peculiarly rich lustrousness in their blackness. He assures me that they never hurt his feet. The new pair he was using when I last saw him emitted no creaking sound and appeared as comfortable as though they had been worn a month. Their predecessors, he told me, had been in constant use for eight months. He obtains the skins from the bodies of negroes which have been dissected in one of our big medical colleges. The best leather is obtained from the thighs. The soles are formed by placing several layers of leather together. The skin is prepared by a tanner at Womseldorf, 16 miles from Reading. The shoes are fashioned by a French shoemaker of this city, who knows nothing of the true character of the leather, but who often wonders at its exquisite smoothness, and says that it excels the finest French calf-skin.

Other articles from this time period also mention items made from human leather. Scientific American reported in 1907 that human skin had been used for a variety of products, including purses, slippers, belts, and even a horse saddle. The article stated that the materials used to make these human leather items were obtained from medical schools but did not mention the race of the deceased "donors."