Is This a Real Ad for a 'Big Dick' Machine Gun for Kids?

Something that was fine for children a century ago would now be considered inappropriate in so many ways. 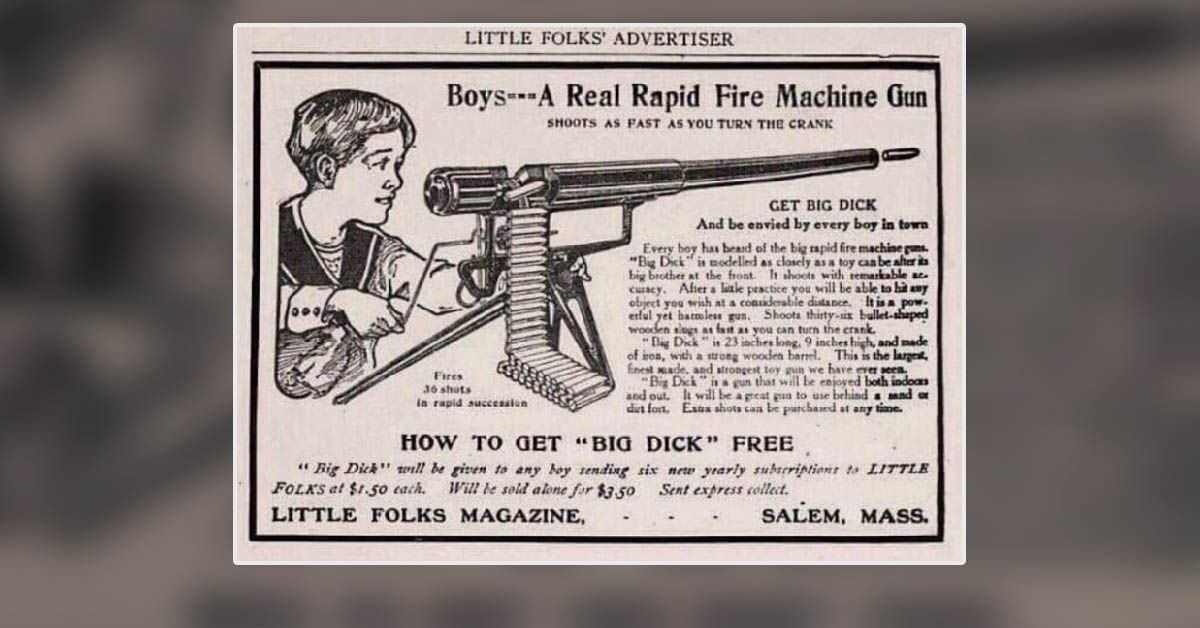 Many a social media user has delighted in sharing what looks to be a vintage advertisement offering a rather unusual toy for boys — a "real rapid-fire machine gun" amusingly named the "Big Dick": The pictured item was indeed a real toy vended in the early part of the 20th century. This ad appeared in, for example, the January 1919 issue of Little Folks, a children's magazine (as well as Boys' Life magazine), at a time when the recently concluded Great War in Europe (later to be known as World War I) had unfortunately lent that weapon a good deal of public prominence: Despite the wording of the ad, the "Big Dick" was not a "real" machine gun in anything but a superficial sense. It used neither gunpowder nor real metal cartridges; rather, it was a spring-action toy that fired "bullet-shaped wooden slugs": Here's a video of the toy in question, showing its (less than impressive) firing rate and mechanism:

Although lines of ad copy such as "Get Big Dick and be envied by every boy in town," "Become a member of the 'Big Dick Brigade,'" and "How to get BIG DICK free" might seem like obvious double entendres to modern audiences, they were not read as such by customers of the time.

Charting the course of spoken (rather than written) language across the years is somewhat difficult. But it appears that although the modern meaning of "dick" as a slang reference to male genitalia had entered the English language at least a few decades prior to World War I, it didn't become common parlance in America until well after the era of the "Big Dick" machine gun toy.