Did Biden Say to US Troops About Ukraine: 'You're Gonna See When You're There'?

The Kyiv Independent referred to U.S. President Joe Biden's choice of words in front of U.S. troops in Poland as an "apparent gaffe." 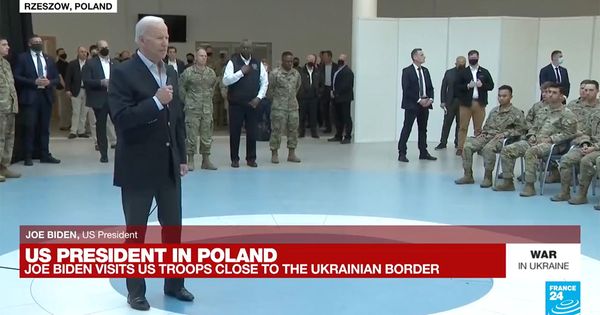 US President Joe Biden was speaking to US troops in Poland about Russia's invasion of Ukraine and said the words And you're gonna see when you're there. (Image Via France 24 and @sentdefender (Twitter))

Claim:
U.S. President Joe Biden told U.S. troops in Poland about Ukraine: "You're gonna see when you're there."
Rating:

According to The Associated Press, Biden's remarks were given in front of U.S. troops who "had been sent near Poland’s border [with Ukraine] to assist with the humanitarian emergency and to bolster the U.S. military presence on the eastern flank of NATO." The words, "and you're gonna see when you're there," were spoken right after the president mentioned the bravery of Ukrainian citizens. Later, the White House once again told reporters that U.S. troops would not be deployed to fight in the war in Ukraine.

On March 25, 2022, U.S. President Joe Biden was speaking to U.S. troops in Poland about Russia's invasion of Ukraine and said the words: "And you're gonna see when you're there." The Kyiv Independent, an English-language news organization in Ukraine, tweeted that it was an "apparent gaffe."

A video of the moment in question was posted to Twitter:

We transcribed the portion of Biden's remarks seen in the video:

But the Ukrainian people, the Ukrainian people have a lot of backbone. They have a lot of guts. And I'm sure you're observing it. And I don't mean just the military, which is, we've been training since back when they uh, Russia moved into, into southeast, southeast Ukraine. But also the average citizen. Look at how they're stepping up. Look at how they're stepping up. And you're gonna see when you're there. And some of you have been there. You're gonna see, you're gonna see women, young people, standing, standing in the middle of, in front of a damn tank, just saying, "I'm not leaving. I'm holding my ground." They're incredible. But they take a lot of inspiration from us.

And, you know, the woman who just died, the secretary of state, used to have an expression. She said, "we are the essential nation." It sounds like a bit of a hyperbole but the truth of the matter is you are the organizing principle around which the rest of the free world is, the free world is moving.

The last part of what Biden said in the video referred to Madeleine Albright, the first female U.S. secretary of state, who had recently died.

According to The Associated Press, Biden's remarks were delivered in front of U.S. troops who were stationed in Poland near the border with Ukraine. They were there "to assist with the humanitarian emergency and to bolster the U.S. military presence on the eastern flank of NATO":

Biden also visited with some of the thousands of U.S. troops who have been sent near Poland’s border to assist with the humanitarian emergency and to bolster the U.S. military presence on the eastern flank of NATO. More than 3.5 million Ukrainians have fled the country since the Feb. 24 invasion, including about 2.2 million to Poland, according to the United Nations.

Within a few days, the number of refugees displaced from Ukraine since last month will exceed the number of Syrians routed from their homes over years of conflict after a 2011 uprising turned into a full-scale war, said Samantha Power, the U.S. Agency for International Development administrator.

The American military commitment in Poland was apparent as soon as Air Force One touched down, rolling past Patriot missile batteries. More hardware, including heavy trucks and other equipment painted with dark green and brown camouflage, was present at the airport. A nearby convention center serves as a base for the U.S. Army’s 82nd Airborne Division.

According to Andrew Feinberg with The Independent, the White House responded to questions about Biden's Ukraine remarks, saying: "The President has been clear we are not sending U.S. troops to Ukraine and there is no change in that position."

We reached out to the Pentagon and the White House for further clarification on Biden's Ukraine remarks to U.S. troops and will update this story should we receive a response.