The rumor that a picture of U.S. President Joe Biden standing in front of the White House had been "staged" in some manner was virally shared in March 2022. 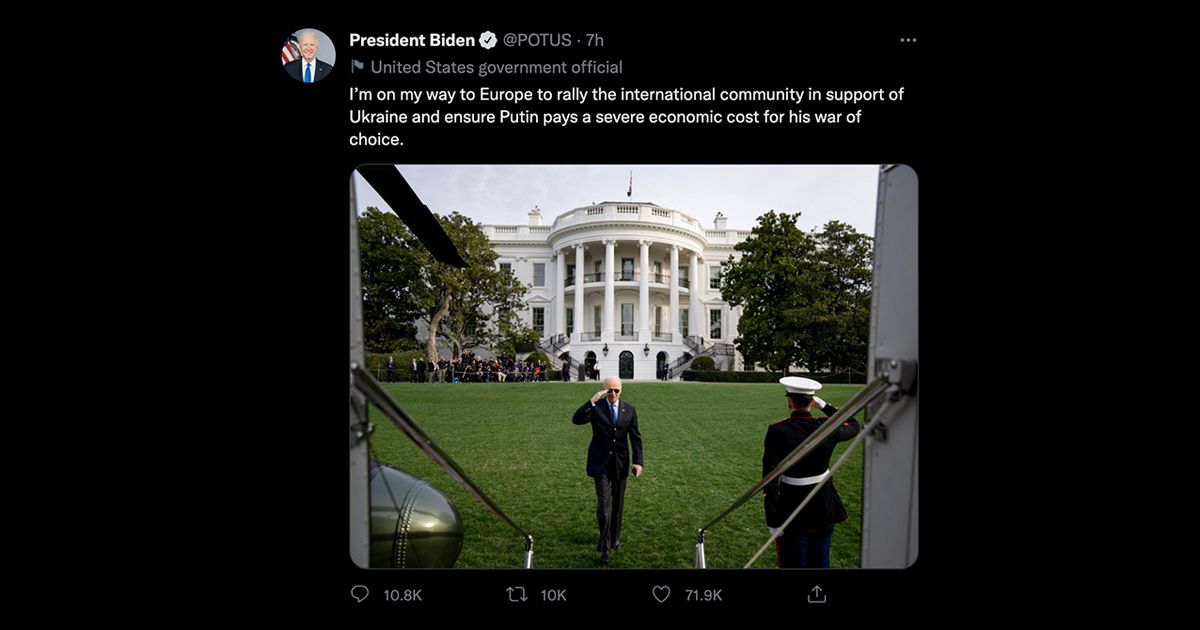 Claim:
A picture of U.S. President Joe Biden in front of the White House in March 2022 was "staged" or digitally altered to add trees.
Rating:

On March 23, 2022, false rumors were shared on Twitter that claimed a picture of U.S. President Joe Biden leaving the White House had been staged with faked or digitally altered trees.

A user named @sourpatchlyds tweeted about the photograph of Biden and the trees with green leaves in the background: "This picture is staged. The trees in DC do not look like that right now. Why? Why is it staged. Why is everything a fucking lie with these people." Another Twitter user named @debostic also appeared to tweet that the picture of Biden showed trees with green leaves that weren't really there in the month of March: "This is a live shot of The White House today. The trees are mostly bare and the weather is overcast. Your administration is a propaganda machine spreading misinformation. Everything you do and say is a lie." Despite these two tweets, the truth here was quite simple.

The "live shot" picture tweeted by @debostic showed the north side. The photograph in the tweet from Biden's @POTUS Twitter account was taken from the opposite side:

This picture from inside Marine One showed Biden saluting a U.S. Marine and walking on the South Lawn in front of the South Portico and two large trees. On this south side of the White House are two historic Southern magnolia trees (Magnolia grandiflora) that, according to tradition, were originally added by former President Andrew Jackson in 1835.

Southern magnolia trees such as the ones framing the South Lawn have evergreen leaves, which explains why the trees are leafy and green in the photo of Biden. For further evidence, another picture captured on the same day by Getty Images photographer Alex Wong also showed one of the magnolia trees in the background.

We found more information about magnolia trees on Brittanica.com. The website published that magnolia trees and shrubs have "evergreen or deciduous, alternate smooth-margined leaves":

magnolia, (genus Magnolia), any member of the genus Magnolia (family Magnoliaceae; order Magnoliales), about 240 species of trees and shrubs native to North and South America, the Himalayas, and East Asia. They are valued for their large and fragrant white, yellow, pink, or purple flowers and frequently handsome leaves and conelike fruits. Some are important garden ornamentals; others are local timber sources.

They have evergreen or deciduous, alternate smooth-margined leaves. The flowers, usually cuplike and fragrant, are located at the branch tips and have three sepals, six to 12 petals arranged in two to four series, and many spirally arranged stamens. The numerous simple ovaries in the centre later form a conelike fruit. The seeds, usually reddish, often hang pendulously by slender threads.

According to The Associated Press, one of Jackson's two magnolia trees on the South Lawn was trimmed in 2017 due to safety concerns. It also noted that the two trees rise "almost as tall as the White House itself."

In sum, no, Biden, his administration, nor anyone else staged the photograph in front of the White House with faked or digitally altered trees. The two evergreen magnolia trees have been living on the White House grounds for nearly two centuries.