Did Biden Try To Shake Hands with Schumer Twice?

Many thought the president looked a little confused at a recent press event. 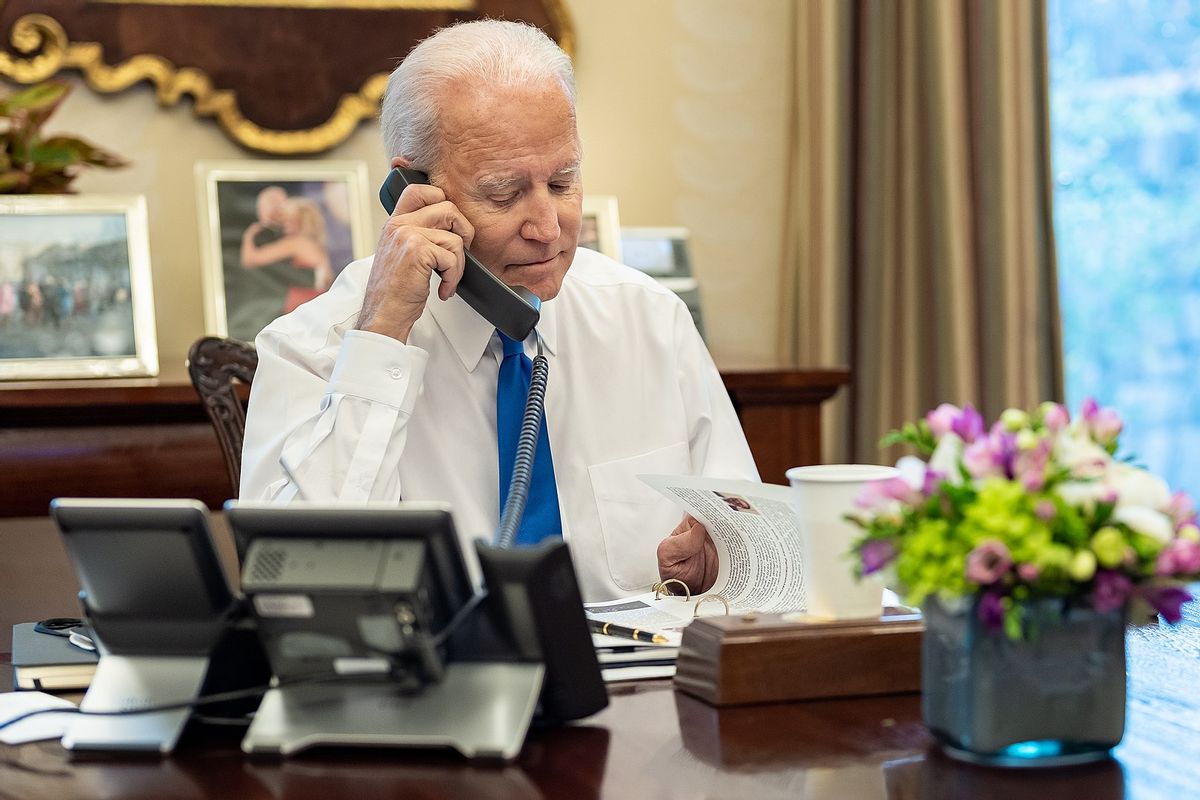 Claim:
At a news conference, U.S. President Joe Biden forgot that he had already shaken Sen. Chuck Schumer’s hand a few seconds earlier and tried to shake it again.
Rating:

U.S. President Joe Biden is known for his frequent public gaffes and awkward encounters, which have often been interpreted, especially by his political opponents, as signs of confusion or perhaps even dementia because of his age.

One particular moment on Aug. 9, 2022, inspired a fresh round of comments questioning Biden's state of mind. As he, Sen. Chuck Schumer, and House Speaker Nancy Pelosi gathered to sign the Chips and Science Act, Biden, according to some observers, forgot that he had already shaken Schumer’s hand and attempted to shake it again.

Conservative news outlets and critics of Biden, including the Republican National Committee's research wing, shared videos of the occasion. The moment also made it onto Sky News Australia.

As the video shows, Biden did raise his hand a second time after having shaken Schumer’s hand already. But we have no way of determining if he “immediately forgot,” as has been claimed, or if he raised his hand for another purpose -- for example, to motion Schumer back to the podium.

CSPAN’s coverage of the event shows it from a different angle than the clips shared above.

The moment can be seen around 12 minutes into the video below, after Schumer concludes his remarks and turns around to shake the hands of Pelosi, Biden, and others on the stage with him. Biden shakes his hand first, Schumer turns to the others for handshakes, and as he turns back to Biden, the president appears to hold his hand out again before Schumer returns to the podium. Biden’s hand then goes up to stroke his chin.

We have previously covered speculation about the almost 80-year-old president’s allegedly declining cognitive ability, some examples of which have relied on exaggeration, and others of which have fed concerns among even Democrats about whether Biden will be capable of running for the presidency again in 2024. Most recently, in July 2022, former President Donald Trump made the baseless claim that Biden was being moved to a nursing home because of "dementia."

As it stands now, all we have is a subjective interpretation of a somewhat awkward-looking situation that may or may not be properly attributed to Biden’s age and mental acuity. We don't what he was thinking or experiencing at that moment, though we have reached out to the White House for comment and will update this article if we receive a response.

In previous fact checks, we demonstrated that presidential behavior interpreted as embarrassing or awkward is not limited to Biden administration, or to Democrats.

Given that not enough evidence exists to verify why Biden raised his hand that way, we rate this claim as “Unproven.”

"Did Biden Fall on Stairs to Air Force One?" Snopes. https://www.snopes.com/fact-check/biden-falls-on-stairs/. Accessed 10 Aug. 2022.

"Did Biden Say to US Troops About Ukraine: “You’re Gonna See When You’re There”?" Snopes. https://www.snopes.com/fact-check/biden-us-troops-ukraine/. Accessed 10 Aug. 2022.

"Did Trump Say Biden “Has Dementia” and Is Moving to a Wisconsin Nursing Home?" Snopes. https://www.snopes.com/fact-check/biden-nursing-home-wisconsin/. Accessed 10 Aug. 2022.