Did the Biden Administration Display the Russian Flag?

At least one Twitter user may be surprised to learn that the colors red, white, and blue aren't exclusive to one country's flag. 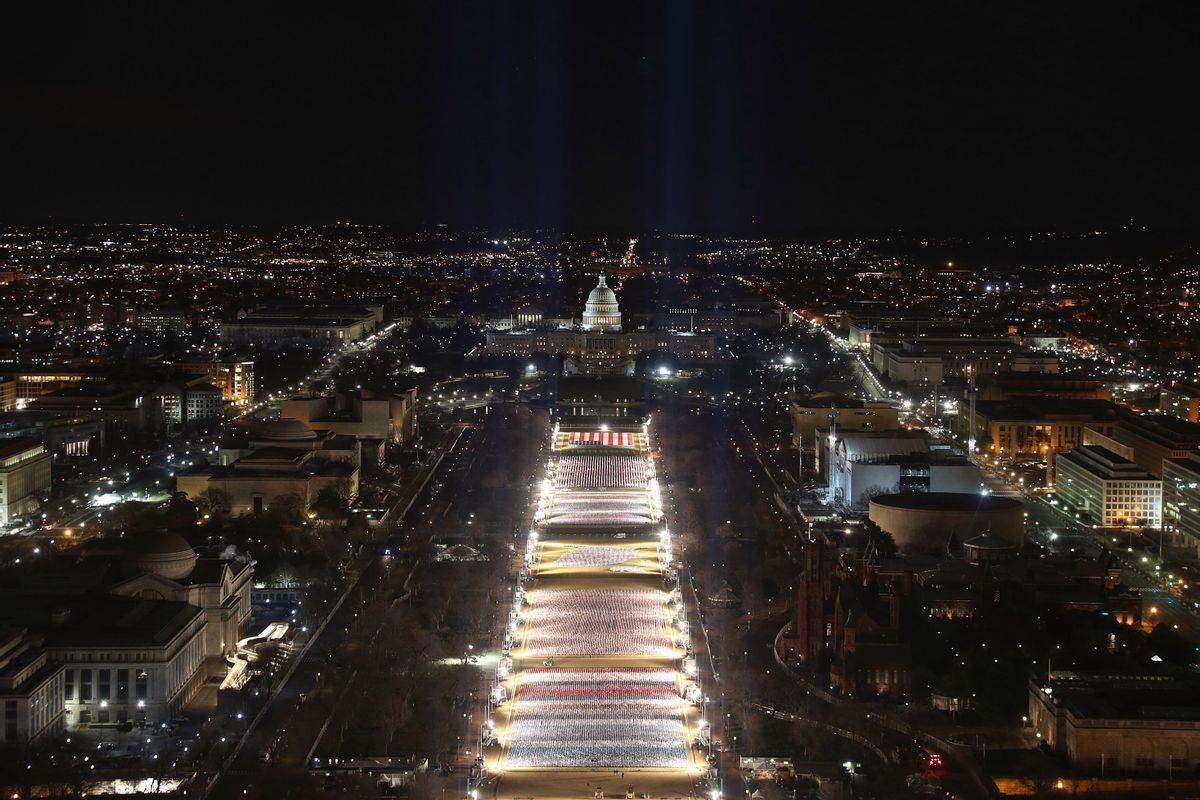 Claim:
The Biden administration displayed the Russian flag on the National Mall ahead of Inauguration Day in 2021.
Rating:

On Jan. 19, 2021, the night before U.S. President Joe Biden's Inauguration Day, the @MrReaganUSA Twitter account tweeted a picture of the National Mall. The person behind the account posted a message with an emoji of the flag of the Russian Federation: "I don't know if the Biden administration is aware of this. But this is the Russian flag. No joke." The tweet ended with "no joke," and some Twitter users who replied didn't seem to think it was a joke, either. "That's actually the first thing I thought," wrote one person. "Exactly what I thought last night when I saw the photo," replied another.

However, the flag display did not "hint" at anything, despite what a third Twitter user said. The Biden administration did not display a Russian flag. Rather, a display of various flags appeared at a distance as stripes of many different colors stretching the length of the National Mall.

Further, others on Twitter pointed out that you could just as easily find in that sea of colors other combinations that resembled the flags for France and the Netherlands, for example.

NPR reported that the flags on the National Mall were part of the "Field of Flags" installation:

In lieu of the crowds of spectators that fill the National Mall for a typical inauguration, this year the iconic stretch of land will be filled with nearly 200,000 flags, representing the thousands of people who cannot attend because of the coronavirus pandemic and tight security in the nation's capital.

This photograph of the National Mall showed Tennessee's mostly red flag in the foreground. Other state and territory flags followed into the distance near the Capitol. Most of the flags appeared in red, white, and blue colors: A worker adjusts decorative flags on the National Mall on January 19, 2021 in Washington, DC. (Photo by Stephanie Keith/Getty Images)

At a time when Americans cannot gather together in person for the inauguration, the PIC will install an extensive public art display on the National Mall that will include approximately 191,500 U.S. flags of varying sizes, including flags representing every state and territory, and 56 pillars of light. This Field of Flags, which will cover the National Mall up to 13th Street, will represent the American people who are unable to travel to Washington, DC, and reflect PIC’s commitment to an inclusive and safe event that everyone can enjoy from their home. To include the American people in the inaugural ceremonies, PIC is welcoming Americans to become a symbolic sponsor of the Field of Flags in exchange for a donation to PIC’s partners in service.

The tweet from @MrReaganUSA, an ardent supporter of former President Donald Trump, appeared to overlook or deflect from Trump's history with Russia. In August 2020, the Senate Intelligence Committee was led by Republicans. At the time, the committee issued its fifth and final report on Russia’s efforts to interfere in the 2016 U.S. presidential election. It detailed the extent to which Trump campaign officials had involvement in the matter.

The Associated Press reported on the Republican-led committee's findings:

The Trump campaign’s interactions with Russian intelligence services during the 2016 presidential election posed a ‘grave’ counterintelligence threat, a Senate panel concluded as it detailed how associates of Donald Trump had regular contact with Russians and expected to benefit from the Kremlin’s help. […] Russia launched an aggressive effort to interfere in the election on Trump’s behalf. It says the Trump campaign chairman had regular contact with a Russian intelligence officer and that other Trump associates were eager to exploit the Kremlin’s aid, particularly by maximizing the impact of the disclosure of Democratic emails hacked by Russian intelligence officers.