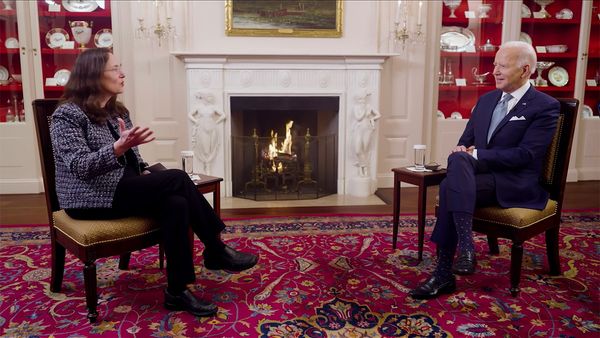 According to viral videos US President Joe Biden said how do we get to the place where you know Putin decides he's gonna just invade Russia. (Image Via Heather Cox Richardson (YouTube))

Claim:
U.S. President Joe Biden said: "How do we get to the place where, you know, Putin decides he's gonna just invade Russia? Nothing like this has happened since World War II."
Rating:

It's true that Biden said this. However, omitted from the trimmed 10-second viral videos on social media was his next sentence, where he realized his mistake and corrected himself, saying: "I mean, Russia's going to invade Ukraine." Also, Biden properly referenced the situation in Ukraine in the same answer just two sentences prior to the remarks that appeared in the viral clips.

In early March 2022, brief video clips went viral that appeared to show U.S. President Joe Biden mistaking Ukraine for Russia during an interview, saying, "How do we get to the place where, you know, Putin decides he's gonna just invade Russia? Nothing like this has happened since World War II." The remarks that referenced Russian President Vladimir Putin were posted following Russia's invasion of Ukraine, which began in late February.

On March 4, Biden's answer was tweeted on the @PapiTrumpo Twitter account. The video showed only 10 seconds from the interview with Biden.

On March 5, the tweet from @PapiTrumpo was amplified when a Facebook user created a screen capture of the Twitter post with the video playing. As of March 16, the repost on Facebook had been viewed nearly 2 million times, and had received more than 125,000 shares.

While it was true that Biden did say the words, "Putin decides he's gonna just invade Russia," there was a reason why the viral videos were so short. In the very next sentence after these remarks, Biden corrected himself, saying, "I mean, Russia's going to invade Ukraine." He also properly mentioned the situation in Ukraine just two sentences prior to the portion that appeared in the clips.

Biden was interviewed by historian Heather Cox Richardson on Feb. 25, right after Russia began invading Ukraine. She posted the full interview on her YouTube channel on March 4. The part from the viral videos begins at the 18:36 mark. The full question and answer with the remark about "Putin decides he's gonna just invade Russia" can be watched from 15:16-20:19.

We transcribed the entire question and answer. The relevant portion is bolded below:

Richardson: People are eager to hear about how we're going to get through this moment. Why should we have faith that American democracy is going to survive?

Biden: Two reasons. Because, uh, I still believe that the vast majority of Americans believe that, they don't think of the founding principles. They think that the United States is all about, at its root, being decent and honorable, that they think that there isn't anything we can't do if we work together. There's never... if we're united we can do anything. And I think that we're going to find that one of the things that has happened, one of those inflection points, was because things are changing so rapidly, people weren't quite sure how to grapple with it, so the best way to win was by division. To go out and, you know, "I tell you what, you know, the only way I can lift myself up is hold you down," and the same thing occurred internationally, where this administration like others around the world have decided that um, you know, it's uh, it's whatever is good for America, only good for America, that's it, we don't think about anyone else or anything else, and it's a it's just a sort of phony populism.

I sort of come out of, politically and intellectually, out of the civil rights movement. I got involved in politics because of civil rights. I was the only white guy working in the east side of Wilmington as a lifeguard. I got engaged with a lot of, I got involved with the community, as things were, as change was taking place, genuine change. And I used to think that you could defeat hate, but all you can do is, all hate does is hide.

When I was a chairman of the judiciary committee, I took great pride in the fact that I was able to extend the voting rights act by 25 years and I got Strom Thurmond to vote for it. Things were changing. Well what I realized is, hate just hides under rocks. What happens is when people come along and breathe oxygen into it, it comes roaring back out. Well, one of the ways to gain power is to pit people against one another based on things having nothing to do other than race, ethnicity, background, white supremacy, you know. I mean, all those things. America began to lose its way a little bit and the "America First" notion that, you know, "what's good for America... we don't care about any agreements we made, any alliances, 'America First,' we do it my way or we're not going to do it." That's never how we've operated before.

And so, I think what we're beginning to see is, I believe, is the notion that, like for example in foreign policy, when I walked in you said it's been an interesting, busy day, both with what's happening in Ukraine and a Supreme Court justice being named. Well, it's kind of fascinating when you think about what's going on internationally. How do we get to the place where, you know, Putin decides he's going to just invade Russia? Nothing like this has happened since World War II. I mean, Russia is going to invade Ukraine.

And I think, I think the problem has been that we've been so divided as a European democracy and other democracies. So I've spent all my time just trying to bring them back together again, so we're on the same page. And the way to deal with autocracy, the way to deal with dictators is united, united front among our allies. And so everything I've done has been designed to bring the G7 back together, bring the EU, and now now we're united, and it's going to be very difficult for the autocrats to succeed in my view. But there's so much more to do. But the point is bringing nations and people together. And that's why in my administration, I think it's fair to say, I know it's accurate numerically, we have the most diverse administration in American history. More women than men in our administration. About 50 some 52 or whatever percent. More African-American judges been appointed. Not just Supreme Court but all through the lower courts as well. When you have 24 out of every 100 students in the grade schools in America speaking Spanish, Spanish speakers, how in God's name is that not in the interest of the United States to reach down and lift those people up just like Irish immigrants in the 1800s or just like Italians after World War II? I mean, yeah, and so, I think people are beginning to realize that.

In sum, yes, Biden said the words, "Putin decides he's gonna just invade Russia." However, he quickly corrected himself and also properly mentioned Ukraine just two sentences prior to the portion that appeared in videos. The correction and the prior Ukraine mention were both omitted from the trimmed viral clips that were posted to social media.