Did Biden Pull Down His Mask at 9/11 Ceremony?

They say a picture is worth a thousand words. 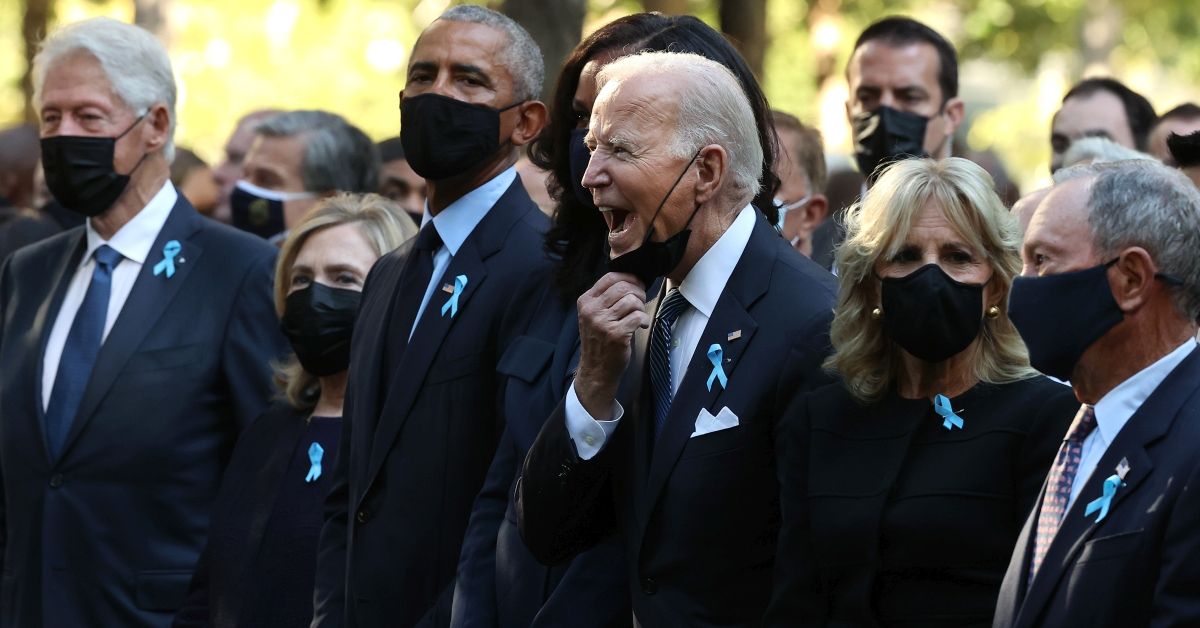 Claim:
While attending a 20-year anniversary ceremony to honor victims of the 9/11 terrorist attacks, U.S. President Joe Biden temporarily pulled down his COVID-19 mask to communicate something.
Rating:

On Sept. 11, 2021, while gathering to memorialize victims of the terror attacks 20 years ago, Getty Images photographers Chip Somodevilla and Ed Jones captured the president temporarily pulling down his mask at least twice. In one of those instances, photojournalists said the president was "calling out" an unspecified word or phrase. However, what Biden said in both moments, and with whom or what he was communicating, is unknown. Also unknown was whether he made the gestures during, before, or after ceremonial activities.

In the days following the 20th anniversary of the 9/11 terror attacks, Snopes readers asked us to determine the validity of a viral photograph supposedly showing U.S. President Joe Biden pulling down his mask to yell something at a ceremony to honor the attacks' victims.

At the 20th anniversary memorial for 9/11, top Democratic politicians all wore masks for a photo op. Then, as soon as the television cameras were off, the masks came off. Sen. Kirsten Gillibrand and Gov. Kathy Hochul are masked one minute, unmasked and talking the next. Speaker Nancy Pelosi has hers off.

President Biden even pulls his mask down to yell at someone. The idiocy.

For the purpose of this fact check, we'll focus on the simple assertion: that the president briefly removed his COVID-19 facial covering to communicate something at a 9/11 memorial service.

The claim stemmed from a real event that took place at the 9/11 Memorial & Museum in Lower Manhattan, where the World Trade Center towers once stood.

On Sept. 11, 2021, officials including Biden and former presidents Barack Obama and Bill Clinton gathered there for a memorial service that included a moment of silence and name-reading of victims, as reported by multiple reputable news outlets.

And it was true that, while standing in the crowd, Biden on at least two occasions temporarily pulled down his mask to communicate something, according to photographic evidence. Considering that verified proof to substantiate the claim, we rate this claim "True."

Getty Images photographers Chip Somodevilla and Ed Jones documented the moments in a series of photographs from the event, including those displayed in the following tweet. Within that group of photos, the the most controversial image (the featured photograph of this report) included the below-transcribed caption in Getty Images' database:

NEW YORK, NEW YORK - SEPTEMBER 11: President Joe Biden (C) calls out as he is joined by (L-R) former President Bill Clinton, former First Lady Hillary Clinton, former President Barack Obama, former First Lady Michelle Obama, First Lady Jill Biden and former New York City Mayor Michael Bloomberg, during the annual 9/11 Commemoration Ceremony at the National 9/11 Memorial and Museum on September 11, 2021 in New York City. During the ceremony six moments of silence were held, marking when each of the World Trade Center towers was struck and fell and the times corresponding to the attack on the Pentagon and the crash of Flight 93. The nation is marking the 20th anniversary of the terror attacks of September 11, 2001, when the terrorist group al-Qaeda flew hijacked airplanes into the World Trade Center, Shanksville, PA and the Pentagon, killing nearly 3,000 people. (Photo by Chip Somodevilla/Getty Images)

In other words, according to at least one reputable photojournalist who witnessed the scene, Biden indeed removed his mask to "call out" something while attending the commemoration event.

However, the reasons why — or circumstances under which — Biden made the gesture were not made clear by that item of reporting. Also unclear was when, exactly, the moment occurred: before the ceremony began, during its activities, or after its closing.

We reached out to Somodevilla for the answers to those questions, and we will update this report when, or if, we hear back from the photojournalist.

Roughy 1.5 hours in, the footage showed Biden and his entourage walking in to the event at ground zero. Then, over the course of minutes, cameras from various angles focused on him and other politicians greeting members of the crowd.

During those conversations before the service's start, Biden pulled down his mask to apparently say something to people around him, the footage showed. That split-second moment, which Jones captured via the below-displayed photo, was separate from the instance mentioned above based on Biden's positioning in the crowd (next to first lady Jill Biden and the Obamas). Shortly after that gesture, the C-SPAN footage showed, the crowd including the politicians assembled to mark the beginning of the memorial service with a flag ceremony and the Star-Spangled Banner. (The video recording did not include the other moment of Biden temporarily removing his mask captured by Somodevilla.)

To conclude our research, we reached out to the White House. Our inquiry included a link to Somodevilla's photo showing Biden "calling out" something with his mask away from his face, and the explicit questions: What was the president saying in that moment, specifically, and to whom, or what, was he saying it?

In sum, it was true the president temporarily pulled down his mask at least twice at a gathering to honor 9/11 victims, and, in one instance, a reputable photojournalist said he "called out" an unspecified word or phrase. However, what the president said in both moments, and with whom or what he was communicating, were unknown. Also undetermined was when — either before, during, or after commemoration activities — the photographs were taken.