Did Biden Say Indian Americans Are 'Taking Over' the U.S.?

Roughly 4 million people of Indian origin currently live in the U.S., representing about 1% of the total population. 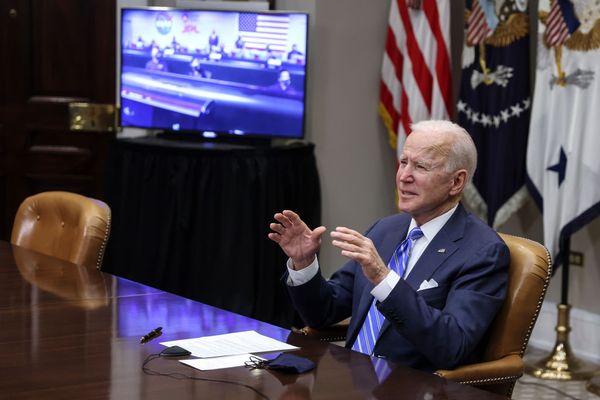 Claim:
On March 4, 2021, U.S. President Joe Biden made the comment that Indian Americans are "taking over the country."
Rating:

During a virtual meeting with NASA scientists on March 4, 2021, Biden literally used the phrase "taking over the country" while describing what he believes is a growing number of Indian Americans assuming high-profile roles in U.S. politics and science.

However, based on the context of the statement, it was erroneous of some people to claim that the president believed an unknown group of Indian Americans was immediately assuming control of the federal government, or that Indian Americans now represented the majority of the country's population, for better or worse.

On March 4, 2021, U.S. President Joe Biden held a video meeting with the NASA team responsible for landing a massive spacecraft on Mars two weeks earlier as part of the space agency's ongoing effort to determine whether there is, or was, life on the planet.

Sitting at a conference table in the White House's Roosevelt Room, the president congratulated the team of engineers and scientists on the other side of a screen. They included Swati Mohan, who emigrated from India to the U.S. as a toddler and helped develop and operate the spacecraft's control system, according to her NASA bio.

Soon after the virtual conversation, news outlets across the world published headlines alleging that Biden told Mohan that Indian Americans were "taking over the country," without any further context. The claim, at surface value, was true. However, without further details to explain under what circumstances he made the comment and to whom he was referring, the verbatim quote as written in the headlines served as a misleading portrayal of the president's comments and invited misinterpretation.

According to C-SPAN's video recording of Biden on the call and a White House transcript of the conversation, the meeting included the below-transcribed excerpt:

Biden: I just want you to know —

Mohan: — for taking the time to speak with us.

Biden: Are you kidding me? What an honor this is. This is an incredible honor. And it’s amazing. Indian — of descent — Americans are taking over the country: you; my Vice President; my speechwriter, Vinay. I tell you what. But thank you. You guys are incredible.

In other words, the president indeed said people of Indian descent are "taking over the country" by, in his opinion, filling more high-profile roles in American politics and science than ever before. He referenced Vice President Kamala Harris and Vinay Reddy, his direct of speechwriting, both of whom have a parent who immigrated to the U.S. from India.

The C-SPAN video showed Biden smiling during the moment, discrediting possible assumptions that he highlighted the alleged trend as something negative for America.

Additionally, given the tone and timing of the statement, it was erroneous to interpret it literally, or to surmise that the president believed an unknown group of Indian Americans were immediately assuming control of the federal government, for better or worse. Hypothetically speaking, presidential records show, the commander-in-chief would not make that type of significant announcement in a light-hearted tone, in passing, during a video call about an unrelated matter.

Also, no evidence showed that Biden believed and proclaimed that a growing number of people were emigrating from India to the United States, or that Indian-Americans were procreating at a rate higher than other populations, so that they were on track to represent the majority of the country's population.

According to the U.S. Census' American Community Survey, which was last conducted in 2018 as of this report, roughly 4 million people of Indian origin currently live in the U.S., representing about 1% of the total population.

In sum, while it was true that Biden literally used the phrase "taking over the country" while describing what he believes is a growing number of people with Indian ancestry assuming high-profile roles in politics and science, it was false to claim the president meant anything more than to highlight the successes of Indian Americans with the statement. For those reasons, we rate this claim a "Mixture" of misleading and true information.