Did Biden Set US 'Back 50 Years' on Energy Independence Progress? 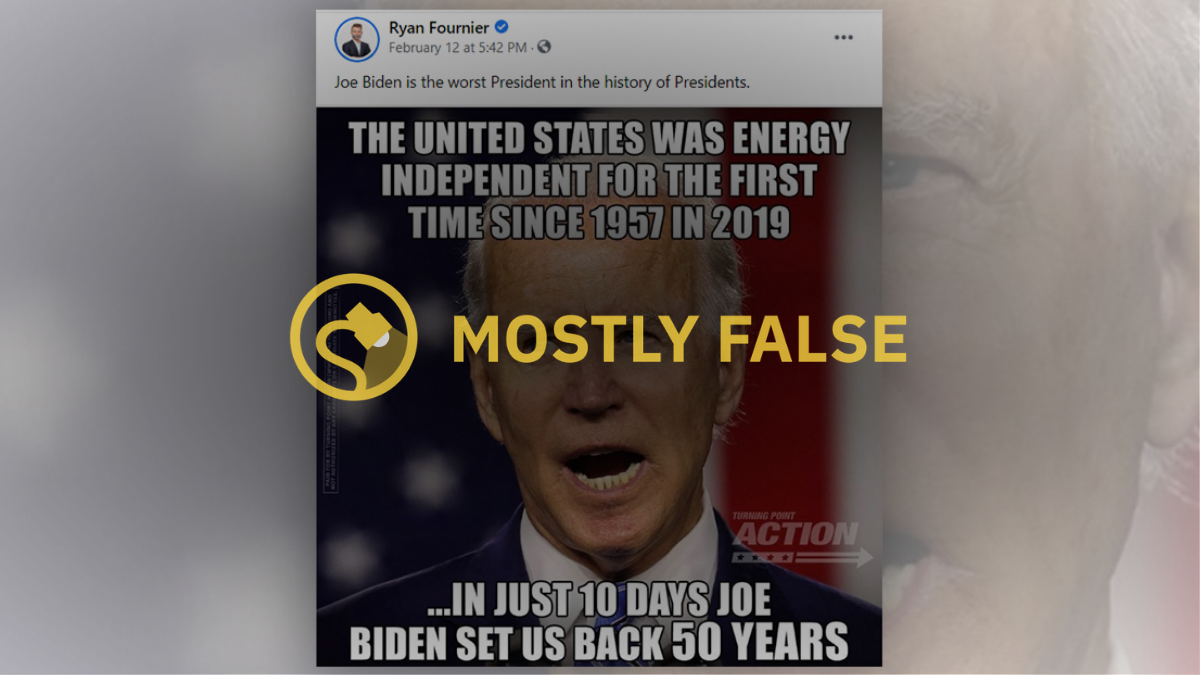 Claim:
After only 10 days in office, Joe Biden sent the United States "back 50 years" on its progress toward energy independence.
Rating:

In 2019, before the global energy market entered a period of COVID-19-related volatility, the U.S. achieved energy independence for the first time since 1957.

However, U.S. fossil fuel exports began to decline in 2020, before Joe Biden took office, and these changes were brought about by a historic decline in the demand for — and cost of — crude oil. The COVID-19 pandemic, not the actions of any U.S. president, was the cause of those trends.

The conservative group Turning Point USA created a meme that pushes a sophomoric and factually lacking political argument. The meme in question, watermarked with the logo of Turning Point USA's political action committee (Turning Point Action), makes two claims. First, it states that the year 2019 was the first year the United States achieved energy independence since 1957. Second, it argues that "in only ten days" Joe Biden "sent us back 50 years," implying policies enacted in the first 10 days of his administration reversed American energy independence: Turning Point Action's graphic, it bears highlighting, makes no reference to the year 2020, despite the fact that President Donald Trump was in office that year.

In 2019, according to data from the U.S. Energy Information Administration (EIA), the U.S. imported 9.1 million barrels per day (MMb/d) of oil from about 90 countries, though at the same time it also exported 8.5 MMb/d of oil to about 190 countries. By email, Zeke Hausfather, a climate scientist and energy systems analyst at the Breakthrough Institute, explained that "our local production does not meaningfully insulate us from potential future global oil price shocks."

The energy independence experienced by the U.S. in 2019 was driven by record levels of total fossil fuel exports from the U.S. That record was set as part of a long-term trend dating back to 2006 and 2008, according to the EIA: The Turning Point meme disregards entirely the existence of the year 2020. The omission of 2020 masks not only a decline in U.S. fossil fuel production that occurred, it also conceals a larger truth about U.S. presidents and the global energy market: Neither they nor their policies have a significant effect on the market compared to other global factors.

A significant factor in allowing the U.S. to increase its energy exports has been the rising cost of crude oil globally. Technological innovations like fracking and horizontal drilling have, in recent years, allowed the U.S. to exploit fossil fuel reserves that were previously inaccessible, but these technologies add cost. A high-cost, high-demand energy economy — like the one present during the record-setting year of 2019 —  benefits the U.S. energy sector because it makes American fossil fuel exports financially viable. The flip side is that the viability of U.S. exports depends in large measure on the going rate for a barrel of oil. If the cost is too low, U.S. drilling operations become financially uncompetitive and exports drop off. The year 2020 saw a historic drop in the price of oil.

"In 2020, U.S. oil production fell by around 8% relative to 2019," Hausfather told Snopes. "This was primarily due to falling global oil prices making relatively high-cost US shale oil production uncompetitive." The drop in demand, and then price, was not the result of any policy decision; it was the result of a massive global pandemic. In a Feb. 3, 2021, news release, Acting EIA Director Stephen Nalley explained that 'the pandemic triggered an historic energy demand shock that led to ... decreases in energy production, and sometimes volatile commodity prices in 2020.'"

Indeed, this volatility resulted in times during 2020 — a year in which Joe Biden was not president — when the U.S. dipped into consuming more energy that it produced. In July and August 2020, the U.S. was not energy independent, at least on monthly terms. By Turning Point USA's logic, this would mean that two months of Trump "sent us back 50 years" in terms of energy policy. In reality, the actions of any U.S. president cannot affect rapid change in the global energy market, and the effect of any domestic policy changes are dwarfed by global factors outside any one president's control.

As previously discussed, the U.S. had already experienced at least a brief period of energy "dependence" before Biden took office. While the most recent month for which we have data — October 2020 — indicates the U.S. was producing slightly more energy than it consumed toward the end of Trump's presidency, U.S. oil production has been dropping off and global demand remains depressed. These trends, which predate the Biden administration, are unlikely to change anytime soon.

“It will take a while for the energy sector to get to its new ‘normal,’” said the EIA's Nalley in February 2021. In its 2021 "Global Outlooks" annual report, the EIA argued that "total U.S. energy consumption will return to 2019 levels by 2029, though that is highly dependent on the pace of U.S. economic recovery." In terms of energy production, "EIA projects that the United States will continue to export more petroleum and other liquids than it imports, but the balance of imports to exports will be highly sensitive to supply, demand, and price factors."

The bottom line, according to the Breakthrough Institutes' Hausfather, is that "oil production changes in 2020 and 2021 are driven by larger changes in global demand and oil prices, rather than anything that either the Trump or Biden administration has done."

Because the meme correctly states that 2019 was the first year the U.S. achieved energy independence in decades, but because it falsely implies a connection between the Biden administration and post-2019 trends in the global energy market that predate his time in office and are independent of the actions of either Trump or Biden, we rank its claims "Mostly False."