Did Joe Biden 'Botch' the Pledge of Allegiance?

The U. S. Democratic presidential nominee quoted part of the pledge during a campaign speech in September 2020. 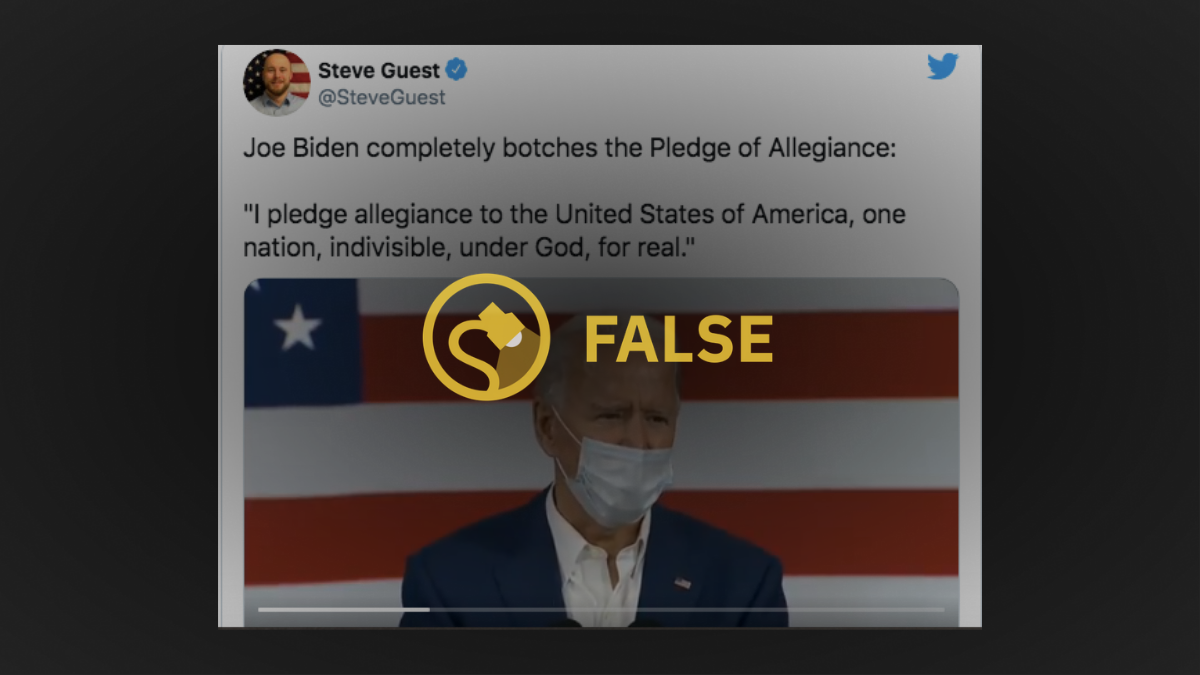 Claim:
Joe Biden 'botched' his recitation of the Pledge of Allegiance during a September 2020 campaign speech.
Rating:

On Sept. 21, 2020, a short video clip of U.S. Democratic presidential nominee Joe Biden was circulated via Twitter, with claims that depicted the candidate as he "completely botches the Pledge of Allegiance." In this clip, Biden can be heard saying, "I pledge allegiance to the United States of America, one nation, indivisible, under God, for real":

The common version of the pledge, used since the mid-1950s, is somewhat longer: "I pledge allegiance to the flag of the United States of America, and to the republic for which it stands, one nation under God, indivisible, with liberty and justice for all."

This clip was an excerpt from a speech Biden had delivered earlier in the day (Sept. 21) at a campaign event in Manitowoc, Wisconsin.

During that speech, Biden criticized Trump's repeated (and false) claim that if "blue" (i.e., Democratic-voting and/or Democratic-run) states were not counted, the U.S. would have one of the lowest COVID-19 death rates in the world:

President Donald Trump blamed "blue states" for increasing the nation's death rate from coronavirus, suggesting that if "you take the blue states out" of the equation the United States would be far more competitive with other countries.

Trump has long blamed Democratic leaders for a variety of ills, including "Democrat-run" cities where protests against police have occasionally turned violent. But his suggestion that states fared better or worse with the pandemic depending on their political persuasion was his most explicit effort yet to frame the handling of the virus in political terms.

The president's remarks came as his administration has faced questions about the death rate from the virus in the United States compared with other countries. The U.S. has experienced about 60 coronavirus deaths for every 100,000 people, according to Johns Hopkins data, among the highest rates in the world.

Speaking to reporters at the White House, Trump argued the United States is handling the virus well "despite the fact that the blue states had tremendous death rates."

"If you take the blue states out," he continued, "we're at a level that I don't think anybody in the world would be at. We're really at a very low level but some of the states – they were blue states, and blue-state managed."

Other states with a high number of deaths include Texas, a red state, and Florida, a battleground ... [R]ed states and battlegrounds, such as Louisiana, Mississippi, Arizona and Michigan were also in the top ten.

As can be seen in a video of the full speech, when Biden uttered the words captured in the video excerpt seen above, he was not attempting to recite the full Pledge of Allegiance. Rather, he was referencing that pledge in a shorthand way to make the point that the president of the United States is supposed to owe an allegiance to serve all the states -- not just red states or blue states:

Think about what he is saying. He is saying that if you live in states like Wisconsin, Michigan, Pennsylvania -- states with Democratic governors -- you are not his problem. He has no obligation to you, he is not responsible for you as president, your family or you well-being. I don't see the presidency that way. I don't pledge allegiance to red states of America, or blue states of America. I pledge allegiance to the United States of America, one nation, indivisible, under God. For real. I'm running as a proud Democrat, but I'm not going to govern as a Democratic president. I'm going to govern as president.

Given that Biden was clearly alluding to the Pledge of Allegiance to highlight a political issue, not offering a recitation of the pledge, it cannot be fairly said that he "completely botched" his delivery.