Did Biden Wear His Walking Boot on the Wrong Foot? 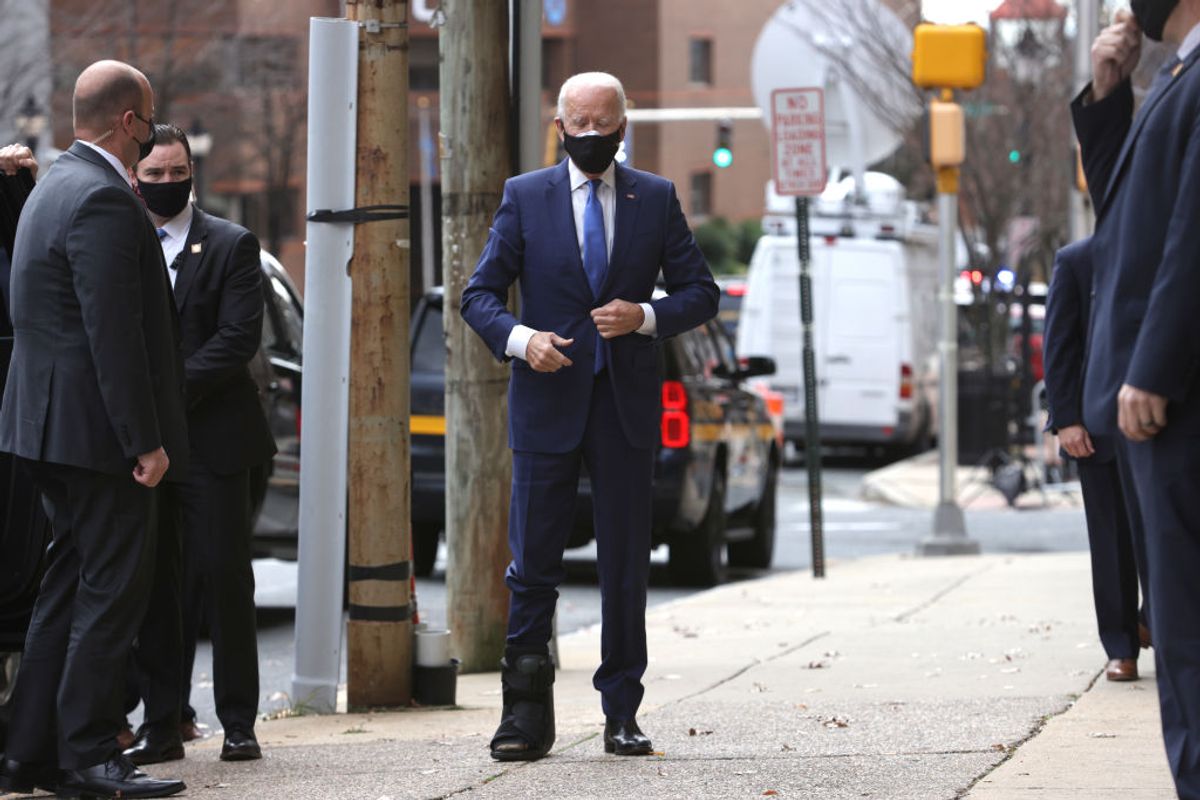 Claim:
Photographs prove that U.S. President-elect Biden put an orthopedic boot on the "wrong foot" in December 2020, accidentally "revealing" that his fractured foot was a ruse.
Rating:

In November 2020, President-elect Joe Biden suffered a hairline fracture in his right foot while playing with his dog, Major, requiring him to temporarily wear an orthopedic boot.

The appearance of the walking boot prompted plenty of baseless online speculation, including the conspiracy theory — which we addressed in greater depth previously — that Biden was just the latest high-profile public figure to be caught engaging in child sex trafficking and forced to wear an ankle monitor, with the boot designed to cover up the monitor.

In early December, another entirely baseless claim emerged, this time that Biden, supposedly while engaging in the deception of wearing an orthopedic boot, had absent-mindedly put it on the wrong foot.

On Dec. 2, 2020, Facebook user Kris Sun posted two side-by-side pictures of Biden: one showing him with a gray boot on his left foot, and the other showing him wearing a black boot on his right foot: On Dec. 7, a TikTok user who regularly posts right-wing and pro-Trump memes and tropes posted a video that contrasted the same two photographs: Biden with a gray boot on his left foot; and Biden with a black boot on his right foot. She added the following caption: "Sleepy Joe did you forget which ankle was fractured?" In reality, the picture of Biden wearing a gray boot on his left foot was digitally manipulated, and the the claim the president-elect had "forgotten" which foot was broken, and put his boot on the wrong foot, was entirely false.

The original photograph was taken outside the Delaware Humane Association in November 2018 and shows Biden taking Major home after adopting him, a somewhat ironic twist, given the cause of Biden's broken foot, two years later. Malicious or mischievous internet users later digitally added the orthopedic boot, as well as a fake face mask, in order to give the doctored image a veneer of COVID-19-era authenticity: The second picture in the misleading December 2020 memes — the one showing Biden with a black boot on his right foot — was authentic. It was taken by Getty Images photographer Alex Wong in Wilmington, Delaware, on Dec. 1: