Did Biden 'Admit' to Voter Fraud? 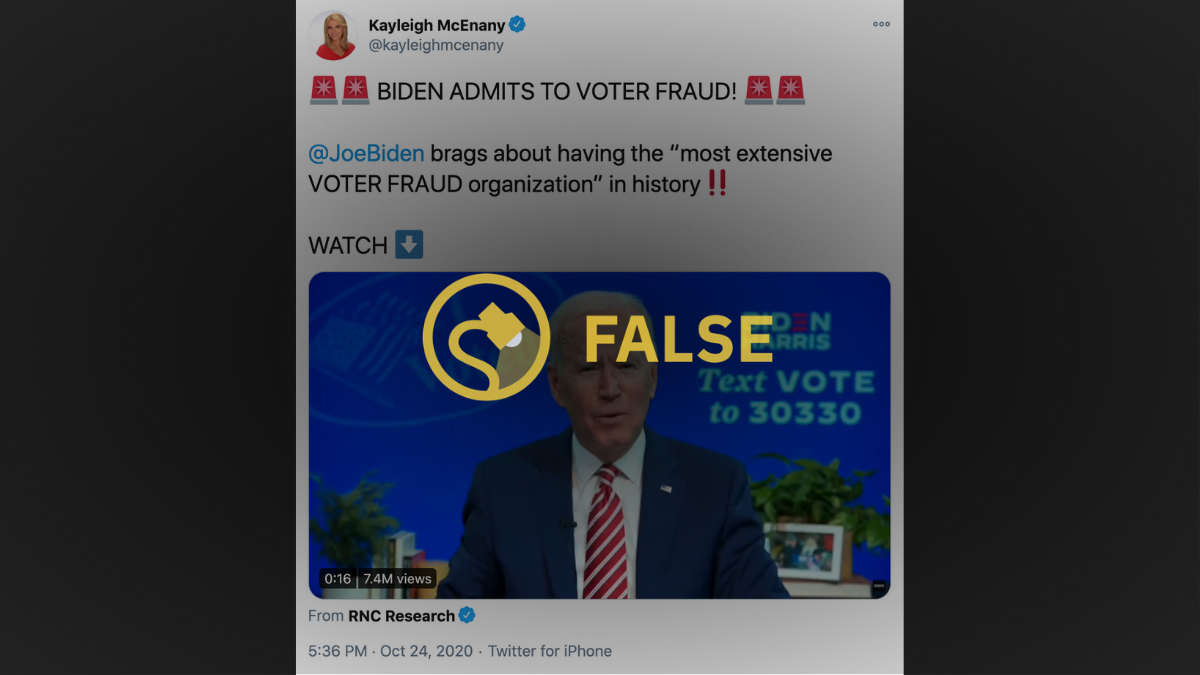 Previous Article
Next Article
Article 7 of 12 in Collection

In the final weeks of the 2020 presidential election, the campaign of U.S. President Donald Trump claimed Democratic nominee Joe Biden had "admitted" to perpetrating electoral fraud.

On Oct. 24, White House Press Secretary Kayleigh McEnany tweeted out a short video clip of Biden, along with the following text:

Joe Biden brags about having the “most extensive VOTER FRAUD organization” in history!! In the video, which was originally posted by @RNCResearch, the Republican Party's opposition research division, the former vice president can be seen saying:

The same clip was also promoted by Eric Trump, son of the president and Trump campaign surrogate, as well as Trump himself, who added "What a terrible thing for Biden to say! Rigged election?"

The footage was not digitally altered, but it was stripped from its original context. That context, along with clarifications provided by the Biden campaign, clearly show that Biden did not "admit" to perpetrating voter fraud, but rather was referring to his campaign's efforts to protect the ballots of voters from what they presented as voter intimidation and false claims of voter fraud.

Biden made the remarks shown in the video during an interview with the popular left-leaning political podcast Pod Save America, which was published on Oct. 24, 2020. Pod Save America is hosted by Jon Favreau, Jon Lovett, Dan Pfeiffer, and Tommy Vietor, all of whom previously worked in the administrations of former President Barack Obama. The relevant section of the interview can be watched below. Toward the end of the discussion, Pfeiffer asked Biden a two-part question:

In the interest of providing readers with all the relevant context, a transcript of that question and Biden's response can be found here. In brief, Biden encouraged prospective voters not to be intimidated by what he cast as efforts by Republicans and the Trump administration to suppress voting, especially by people of color. He outlined what he presented as his campaign's efforts to ensure the integrity of the election, including a dedicated telephone helpline, backed by hundreds of attorneys offering support and advice, as well as poll-watchers who will "police and watch" the election.

Immediately after he referred to "the most extensive and inclusive voter fraud organization in the history of American politics," (the soundbite highlighted in the RNCResearch clip), Biden said:

"What the president is trying to do is discourage people from voting by implying that their vote won't be counted, it can't be counted, we're going to challenge it and all these things."

"If enough people vote," Biden added, it would "overwhelm the system" and effectively ensure that Trump's purported efforts at voter suppression would not be successful.

It's clear from watching the clip in its proper context that Biden was describing his campaign's efforts to combat voter suppression and intimidation, as well as misinformation about the widespread perpetration of voter fraud. It would make no sense for a political candidate whose campaign was engaged in large-scale electoral fraud to publicly say as much, in those words, and that's not what Biden was doing.

Providing additional context, the Biden campaign confirmed for Snopes that he used shorthand to refer to his campaign's election protection initiative, which involves educating prospective voters, countering attempted voter suppression and intimidation, having lawyers on hand to provide advice to voters whose ballot is disputed or challenged, as well as the national hotline mentioned by Biden, and several similar, state-specific hotlines.

The President of the United States has already demonstrated he’s willing to lie and manipulate our country’s democratic process to help himself politically, which is why we have assembled the most robust and sophisticated team in presidential campaign history to confront voter suppression and fight voter fraud however it may present itself. The American people will decide the outcome of this election on November 3rd through a free and fair election, as they always have.

By describing his campaign's program to combat voter suppression and protect the integrity of the election as a "voter fraud organization," Biden left open his remarks to possible misinterpretation, but crucially, only if that phrase was presented outside its original context, which the Trump campaign did. If the remarks are viewed in their proper context — Biden's whole response to Pfeiffer's question — it's abundantly clear that Biden was not, for some unexplained reason, confessing to perpetrating electoral fraud on a historically massive scale, less than two weeks before Election Day.

Previous Article
Next Article
Article 7 of 12 in Collection