Did Biden Drive an 18-Wheeler?

Biden got a firsthand look at a trucker's life on the road in 1973, but has he ever actually driven an 18-wheeler? 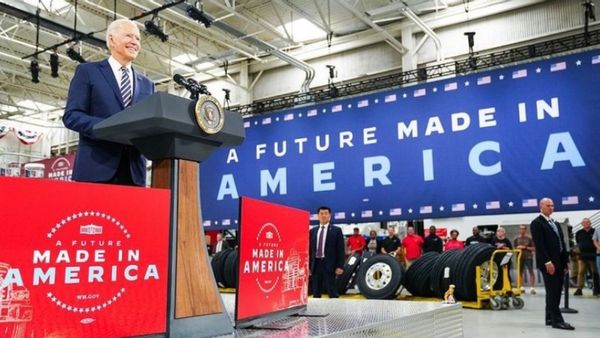 While touring a Mack Trucks facility in July 2021, U.S. President Biden said "I used to drive an 18-wheeler... I got to." The president appears to have been referring to the the time in 1973 when he rode 500 miles in a "47,000 pound cargo truck" to get a firsthand look at what it was like to be a trucker. Biden rode in this vehicle, but he did not drive it.

On July 28, 2021, U.S President Joe Biden was touring a Mack Trucks facility in Pennsylvania when he remarked to Mack Trucks president Martin Weissburg that he "used to drive an 18-wheeler ... I got to."  This moment was singled out on Twitter by the Republican National Convention's Research account:

There isn't much more context to add to this video. As the president was moving from one vehicle to the next, he mentioned his personal experience with cars. Biden said he was "raised by an automobile man" (his father used to sell cars) and then added that he "used to drive an 18-wheeler ... I got to." Biden did not elaborate on this comment as the tour moved on to the next vehicle.

The nine-second clip above can be seen at the eight-minute mark of the following video:

So, did Biden ever drive an 18-wheeler?

The president certainly was never a professional trucker. As the RNC notes above, Biden has spent the vast majority of his professional life as a politician. He became a U.S. senator in 1973. Before that, he worked at a law firm.

Biden appears to be referring to a 500-mile trip he took in 1973 on a 47,000-pound cargo truck carrying hollow-shell pipe. Biden, a freshman senator at the time, said that he took the trip because he "wanted a firsthand account from the truckers, who say they carry 50 percent of all the goods shipped within the United States."

An article Biden wrote about this experience was published in The News Journal in December 1973:

While Biden rode in an 18-wheeler during this trip, it doesn't appear that he ever drove it.

We are unaware of any other time Biden may have driven an 18-wheeler. Biden did drive a school bus to make extra money during law school, according to the United Federation of Teachers, but buses aren't 18-wheel vehicles. We reached out to the White House for comment, and we will update this article if more information becomes available.