An image was digitally created after a construction tycoon was arrested for hunting in a protected sanctuary. 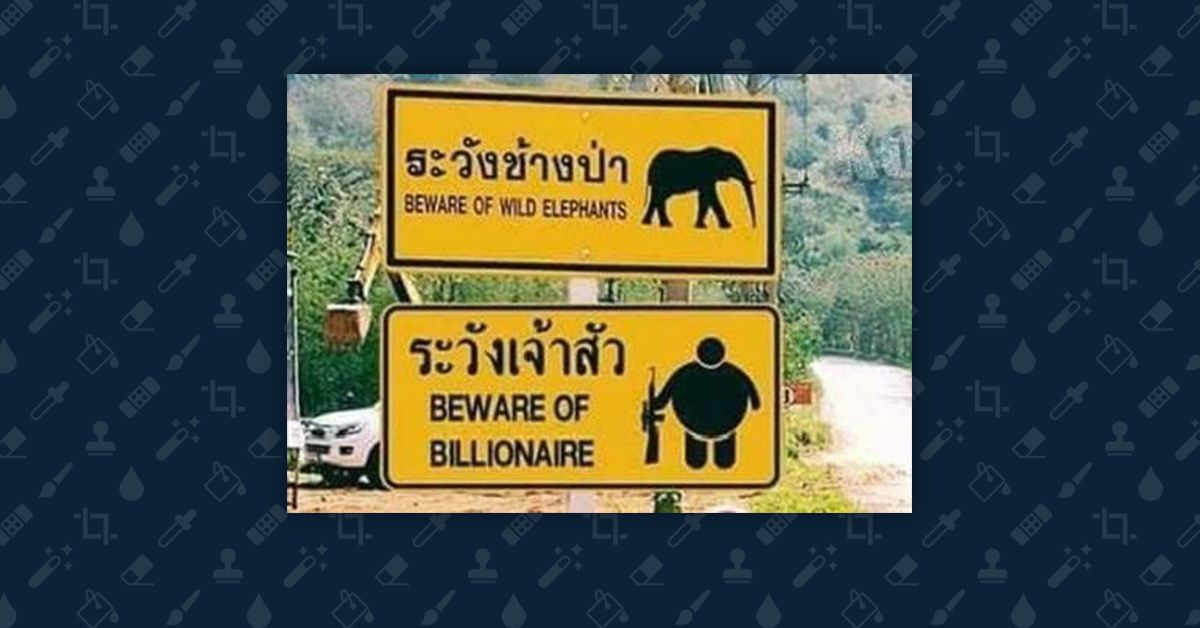 Claim:
A photograph shows a "Beware of Billionaire" hunters sign in Thailand.
Rating:

Big game hunting is a topic that is guaranteed to garner attention on the internet.

Recently an image purportedly showing a new sign installed on the side of a road in Thailand appeared to warn residents about roaming billionaires (along with seemingly mocking symbol of an obese hunter) was posted online. It wasn't surprising to see it spread quickly across social media: The "Beware of Billionaire" sign above is a digital creation.

One would expect for government installed signs in Thailand to have similar design qualities. However, the words "Beware of Billionaire" on this sign are written in a different sized font than the "Beware of Elephants" sign.

The fake sign also has rounded edges, where as the "elephants" signs edges are squared.

Lastly, you can see the markings where the "elephants" sign was installed to the pole. The "Beware of Billionaire" sign, on the other hand, has no such markings: A larger version of this image was posted to the Facebook page "ชมรมแพทย์ชนบท," a page supporting rural clinics in Thailand, on 10 February 2018. It appears that the image was cropped in order to remove a watermark reading "Mao@Muaklek": We attempted to track down "Mao@MuakLek" but couldn't locate the apparent image creator. In fact, it appears that this watermark may have been the result of a mistranslation: Muak Lek is a province in Thailand and a Twitter posting credited this image to "Cr.คุณ mao@muaklek" (translated to Khun Mao @ Muaklek). It seems that this image was taken in Muak Lek rather than by MuakLek.

Regardless of who was responsible for creating this image, the "Beware of Billionaire" sign is fake.

The Thai web site Spring News posted a genuine version of this image: The "Beware of Billionaire" sign went viral in February 2018 shortly after construction tycoon Premchai Karnasuta was arrested in Thailand for hunting in a protected wildlife sanctuary. The Washington Post reported:

The head of one of Thailand’s largest construction companies has been arrested for hunting protected animals in a wildlife sanctuary and was found with the skin of a black panther and other animals, officials announced Tuesday.

Thailand’s Department of National Parks, Wildlife and Plant Conservation said Premchai Karnasuta was arrested Sunday with three others after park officials were informed they had set up camp in a restricted wildlife sanctuary on Thailand’s western border. The Thung Yai Naresuan Wildlife Sanctuary is listed as a World Heritage Site by the U.N. cultural agency UNESCO because of its diversity of fauna and flora.