Was Betsy Ross a Quaker Who Was Opposed to Slavery?

The so-called "Betsy Ross flag" has become a recent point of controversy in connection with white supremacy and raised questions about Ross herself. 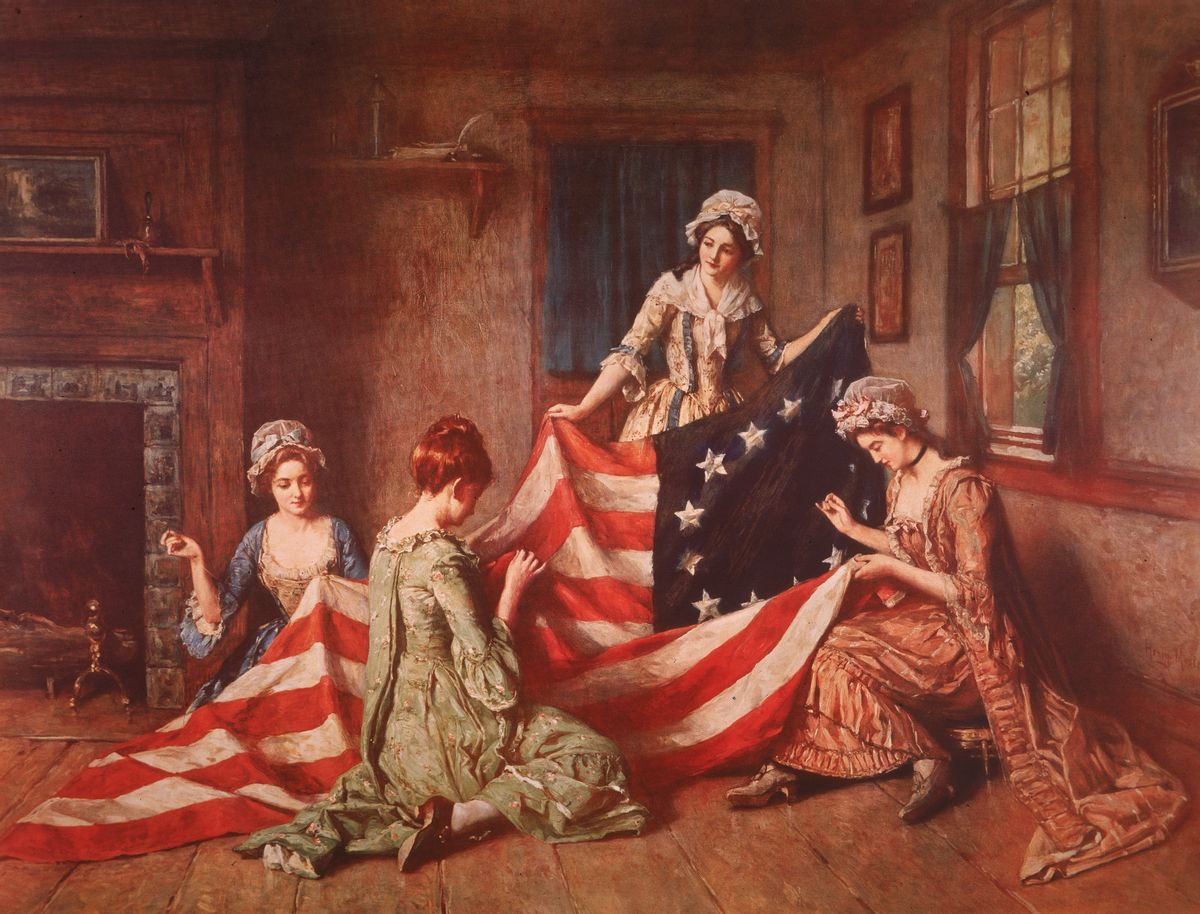 Betsy Ross was a Quaker for a significant portion of her life, and Quakers were opposed to slavery.

However, no evidence exists that Ross made the first American flag or that she made the one now known as the "Betsy Ross flag."

Because no documentation exists of Ross' interior life, her personal views on slavery are not definitively known.

During her life, Betsy Ross was a craftswoman who made flags. After her death, her name and a historical flag design linked to it took on a life of their own. But much of what is assumed to be true is an emotionally fraught myth.

Over time, Betsy Ross became something of a legend whose role in the American Revolutionary War was the creation of the first version of the Stars and Stripes. But in the Trump era, the meaning of the flag associated with her name has shifted, as illustrated by a meme that circulated on Facebook in late September 2019: How did the historical flag dubbed "Betsy Ross," named after the woman who is often depicted in art work sewing the 13-star design in her parlor at the behest of George Washington, come to represent slavery in the minds of some, as inferred by the meme?

The furor started in the summer of 2019, when clothing brand Nike canceled a sneaker design that featured the flag, purportedly after athlete-turned-civil-rights activist Colin Kaepernick and others raised concerns about it. Not only did placing the flag on the Air Max 1 sneaker give the problematic appearance of celebrating an era in American history in which slavery was legal, critics stated, the flag had also been spotted among extremists at the deadly "Unite the Right" white supremacist rally in Charlottesville, Virginia, in 2017.

The criticism and Nike's actions attracted what has become a typical backlash against topics of racial justice in the Trump era: hyperbole that fails to directly address the issue at hand:

It’s a good thing @Nike only wants to sell sneakers to people who hate the American flag.... @NFL #HappyFourth https://t.co/G6w8vDjvLP

Since this controversy, many have attempted to defend the Betsy Ross flag with heavy doses of whataboutism or misdirection.

The criticism over the shoe design, after all, was not about Betsy Ross herself. It instead questioned a popular brand for appearing to celebrate an American era in which black people were enslaved, and raised concerns over the the evolution of that flag's meaning, post-Charlottesville.

The facts about Ross, the historical person, differ greatly from the myth. Although she was born into a Quaker family and the Quakers were opposed to slavery, her personal views on the subject are unknown because no historical documentation from her point of view (letters, journals, or other records) is known to survive. That's largely because Ross was not famous until well after her death, according Marla R. Miller, professor of history at the University of Massachusetts at Amherst and author of the book "Betsy Ross and the Making of America."

"There is no document that answers the specific question" about her views on slavery, Miller told us by phone. "We do know that she was a member of the Quaker community, raised in the Quaker tradition, and that in these decades, the Quaker community increasingly rejected slavery."

Only slight evidence exists that documents Ross’ work making flags during the War of Independence. She was a craftswoman in the upholstery trades. She did make numerous flags for the federal government alongside her daughter, Clarissa Wilson, particularly in the years before the War of 1812. The design of the American flag evolved over the course of the Revolutionary era, and no evidence exists that any of the flags she made bore the 13 stars-in-a-circle pattern.

Ross did know George Washington — he patronized her upholstery business. Early documentation of her story given by her daughter asserts that Ross was proud of introducing Washington to a method of folding that allowed five-point stars to be created with just one cut of the scissors, making production quicker and easier. But Ross' story, as relayed by her daughter, does not include the claim that she made the first American flag.

Ross was indeed raised in the Quaker tradition, although she was forced out of the faith when she married John Ross, an Anglican. She was widowed and remarried twice, returning to the Quaker tradition later in life with the formation of the Free Quakers after the Revolutionary War.

There's a reason for that lack of historical clarity around the origins of the flag, said Marc Leepson, historian and author of the book "Flag: An American Biography." During Ross' lifetime, flags weren't endowed with the type of sanctity characteristic of current norms -- so the making of flags wasn't considered noteworthy.

Furthermore, an official flag design didn't exist until President William Howard Taft signed an order designating one in 1912. Popular images depicting Washington crossing the Delaware with the Betsy Ross flag, for instance, are apocryphal. The oldest physical flag with that configuration of stars found to date was made in the early 1800s.

"We don't know who made the first American flag," Leepson told us. "It wouldn't have been newsworthy that someone made the first flag, because people didn't feel even remotely the same way about it like they do now."

Adulation of the flag, in the way that it is done now, started in the North at the commencement of the American Civil War, Leepson said. After the war, it spread nationwide. The symbol of a nation united after a bloody civil war was part of the flag's newfound importance, Leepson noted.

Miller theorizes that the story of Ross and the first American flag took off because the time period her descendants were going public with it coincided with the women's suffrage movement. It solved a cultural problem by giving a woman an important place in the Revolutionary War while doing something domestic and non-threatening, which was sewing. It was solidified in the popular imagination with a public campaign to preserve her historic Philadelphia home on Arch Street.

No known documentation of Betsy Ross' personally held beliefs about slavery exist, but because she was a member of the Quaker community for a significant portion of her life, it's probably a credible assumption that she herself opposed it. However, the origins of the so-called Betsy Ross flag are apocryphal, which arguably renders her beliefs in relation to that flag's use irrelevant. Furthermore, the more recent argument against the use of the flag for mainstream purposes stems from a new evolution of the flag's use by far-right groups at a racist rally in 2017.