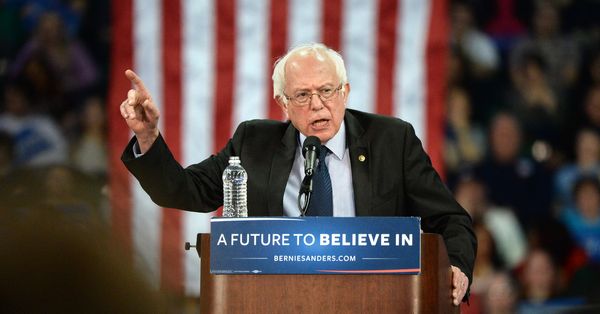 On 10 June 2017, an article appeared on the web site Babylon Bee appearing to report that Sen. Bernie Sanders (D-Vt.) had proposed a bill requiring Christian public servants to sport a "scarlet cross" identifying their religion:

WASHINGTON, D.C.—Bernie Sanders is doubling down on his condemnation of Christians holding public office as “hateful.” According to reports from within the U.S. Senate, the Senator from Vermont proposed a bill Friday that would force Christians holding any kind of public office to wear a visible scarlet cross on their clothing at all times, in order to clearly identify themselves as hateful bigots.

Dubbed the Hateful Bigot Identification Act, the bill would require anyone believing in salvation through Christ alone to wear the cross, in order that co-workers and citizens could immediately identify and disregard the opinions of the disgusting, backwards, religious public servants.

In case it isn't obvious, no such legislation was actually proposed. The Babylon Bee is a satirical web site whose slogan reads: "The Babylon Bee is Your Trusted Source For Christian News Satire." In the past, they have published tongue-in-cheek stories informing readers that California passed a law requiring Christians to register their Bibles as assault weapons and that a North Carolina church instituted baptisms via water slide.

The Sanders spoof was prompted by a real-life event, namely the senator's heated questioning of Russell Vought, President Trump’s nominee for deputy director of the Office of Management and Budget, during a confirmation hearing on 8 June. Sanders took issue with statements Vought made about Muslims in January 2016:

Sanders: You wrote, "Muslims do not simply have a deficient theology. They do not know God because they have rejected Jesus Christ, His Son, and they stand condemned." Do you believe that that statement is Islamophobic?

Vought: Absolutely not, Senator. I'm a Christian, and I believe in a Christian set of principles based on my faith. That post, as I stated in the questionnaire to this committee, was to defend my alma mater, Wheaton College, a Christian school that has a statement of faith that includes the centrality of Jesus Christ for salvation, and —

Sanders: I apologize. Forgive me, we just don't have a lot of time. Do you believe people in the Muslim religion stand condemned? Is that your view?

Vought: Again, Senator, I'm a Christian, and I wrote that piece in accordance with the statement of faith at Wheaton College.

Sanders: I understand that. I don't know how many Muslims there are in America. Maybe a couple million. Are you suggesting that all those people stand condemned? What about Jews? Do they stand condemned too?

Sanders: You think your statement that you put into that publication, they do not know God because they rejected Jesus Christ, His Son, and they stand condemned, do you think that's respectful of other religions?

Vought: Senator, I wrote a post based on being a Christian and attending a Christian school that has a statement of faith that speaks clearly in regard to the centrality of Jesus Christ in salvation.

Sanders: I would simply say, Mr. Chairman, that this nominee is really not someone who this country is supposed to be about. I will vote no.

In turn, Sanders's declaration that he would vote against Vought's confirmation was condemned by some as the application of a "religious litmus test" for public office, something the U.S. Constitution specifically forbids (hence the Bee's metaphorical imagery of Christians marked for discrimination with a scarlet cross).

"It’s one thing to take issue with bigotry," Emma Green objected in The Atlantic:

It’s another to try to exclude people from office based on their theological convictions. Sanders used the term “Islamophobia” to suggest that Vought fears Muslims for who they are. But in his writing, Vought was contesting something different: He disagrees with what Muslims believe, and does not think their faith is satisfactory for salvation. Right or wrong, this is a conviction held by millions of Americans—and many Muslims might say the same thing about Christianity.

This is the danger of relying on religion as a threshold test for public service, the kind of test America’s founders were guarding against when they drafted Article VI.

But Sanders's opinion echoed that of the American Civil Liberties Union (ACLU), which, although it stopped short of calling for Vought's nomination to be rejected, issued a 7 June statement decrying Vought's views as in conflict with the principle of religious liberty:

Religious freedom is such a fundamental liberty that the framers of our Constitution enshrined it in the First Amendment. That’s why it’s so disturbing that Trump continues to pack his administration with appointees like Russell Vought, whose views threaten that very freedom.

Trump’s nominee for this powerful position that helps decide how federal money is spent has claimed that "Muslims do not simply have a deficient theology. They do not know God because they have rejected Jesus Christ his Son, and they stand condemned."

We know that diversity is one of our nation’s greatest strengths, and it is vitally important that Americans have confidence that their public servants will serve our entire nation in good faith. That’s why we will watch Vought closely and press to ensure that those helping decide how public money is spent and the government is managed understand the vital importance of nondiscrimination.

We reached out to Sen. Sanders for clarification of his remarks but have thus far not received a reply.

Vought, Russell.   "Wheaton College and the Preservation of Theological Clarity."    The Resurgent.   17 January 2016.