Did Bernie Sanders Express Support for Iran During '79 Hostage Crisis? 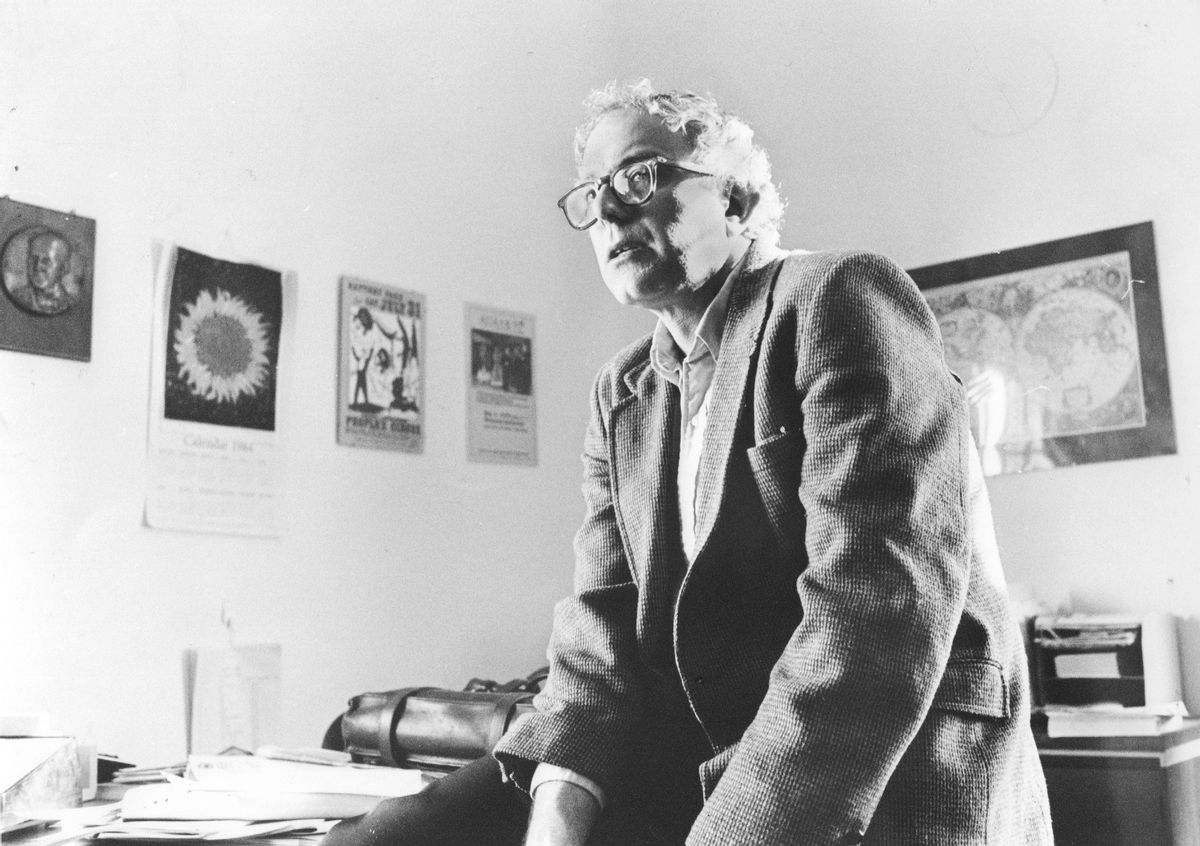 In January 2020, we received multiple inquiries from readers about the accuracy of a social media meme that made striking claims about the past record of U.S. Sen. and 2020 Democratic presidential contender Bernie Sanders. The meme featured black-and-white photographs of Ayatollah Ruhollah Khomeini, who led the Islamic revolution of 1979 and became Iran's supreme leader; former U.S. President Jimmy Carter; and Sanders, along with the following text:

In 1979 Iran took 70 Americans hostage for 444 days. Most [of] America united, but one politician stood alone
Socialist Workers Party leader Bernie Sanders supported Ayatollah Khomeini against the US, condemned President Carter for imperialism, and accused the hostages of being CIA spies.

Is this what Democrat voters stand for?

Bernie Sanders for President?
Maybe in Iran. Not in the US. The claims contained in the meme appeared to borrow from two articles published in January 2020, just two weeks before the Democratic presidential primaries began in earnest with the Iowa caucuses.

On Jan. 16, The Daily Beast published an opinion column written by historian Ronald Radosh, which carried the headline, "When Iran Took Americans Hostage, Bernie Backed Iran's Defenders." There, Radosh wrote that Sanders "aligned himself with the Socialist Workers Party (SWP), the self-proclaimed Trotskyist revolutionary party, became its presidential elector in Vermont, and campaigned for its candidates and platform that defended the Iranian hostage seizure."

On Jan. 18, The Jerusalem Post published an article that bore the headline, "Bernie Sanders Backed a Party That Supported Iran During Hostage Crisis." The piece largely restated portions of Radosh's earlier column.

Important differences exist between the claims made in the above-displayed meme, which contained several key falsehoods, and Radosh's article, but the latter also omitted important context and made misleading assertions.

Sanders and the SWP

The January 2020 meme described Sanders as the "Socialist Workers Party leader." This is false. Sanders was never even a member of that party, contrary to Radosh's claim that the future U.S. senator "stood apart by joining a Marxist-Leninist party that not only pledged support for the Iranian theocracy, but also justified the hostage taking" [Emphasis is added].

A spokesperson for the Sanders campaign told Snopes, "Senator Sanders was never a member of the Socialist Workers Party." This is corroborated by several news reports from that era. In October 1980, the SWP's newsletter The Militant described Vermont as "a state where there is no branch of the Socialist Workers Party," further undermining any claim that Sanders, who has lived in Vermont since the late 1960s, was a member of the party (let alone its leader) at that time.

However, Sanders was undoubtedly affiliated with the SWP. In 1980, he served as one of three Vermont Electoral College electors on behalf of the SWP's presidential candidate and leader Andrew Pulley, a former steelworker and Vietnam War veteran from Chicago. Sanders' role and Pulley's candidacy itself were both purely symbolic. Pulley was then only 29 years old and therefore ineligible to serve as president under the U.S. Constitution, and his place on several state ballots, including Vermont, was taken by Clifton DeBerry. Between them, Pulley and DeBerry got just 46,000 votes nationwide.

After Sanders became mayor of Burlington in 1981, running as an independent, his affiliation with Pulley and the SWP continued, and he spoke at SWP campaign events in 1982 and 1984. However, his connection with the party appears to have diminished after that, as Sanders' own political vision moved from revolutionary socialism to social democracy.

The SWP's 1984 presidential candidate, Mel Mason, told Washington Times in 2019 that, "We had a long-distance relationship, but that kind of changed after he ran for Congress [in 1990]. I didn't have as much contact anymore. I have a lot of respect for him, but I just don't think the programs he put forward are what workers need in this country."

It's also important to note that although Sanders supported SWP candidates for president in 1980 and 1984 and spoke at several SWP events, he did not necessarily support or endorse each of their policies or utterances. In fact, Sanders made a point of saying this in the summer of 1980, when it was first announced he would be an SWP elector in that year's presidential election. At the time, he said, "Although I am not in agreement with the SWP on all issues, I strongly support that party's attempt to become a nucleus for a national labor party, which will fight for the interests of low income and working people."

Similarly, Sanders publicly clashed with the SWP on certain issues. At a forum in Worcester, Vermont, in July 1980, he put "demanding questions" to Matilde Zimmermann, the SWP's vice presidential candidate that year, on the subject of nuclear power. According to Burlington Free Press, "the tone of the questions became almost hostile at moments." That interaction came just days after Sanders was announced as a Vermont elector for the SWP.

In combination with the fact that Sanders never joined the SWP, held office in it, nor ran on an SWP ticket, this demonstrates that he was broadly supportive of the party's aims and campaigns for a period, but did not march in lockstep with each and every SWP policy or pronouncement.

The SWP and the Iran Hostage Crisis

During the Iran hostage crisis between 1979 and 1981, the SWP and its leader Pulley did criticize the approach of the U.S. government under then-President Jimmy Carter and at times even expressed support for positions taken by the recently installed, anti-Western, Islamic regime led by Khomeini.

Broadly speaking, the SWP claimed that the Carter administration was cynically using the crisis in order to boost domestic public support for a military conflict with Iran; called on Carter to accede to the Khomeini regime's demands, including the extradition of Mohammad Reza Pahlavi, the U.S.-friendly former Shah of Iran who had been overthrown in the 1979 Islamic revolution and fled to the U.S.; and claimed that the U.S. Embassy, which was stormed in the hostage-taking, had been a hub of American intelligence activities, and some of the hostages were spies.

In November 1980, Pulley and his former running mate Zimmermann published a statement calling on Carter to accede to the Iranian regime's demands, calling them "simple and just," and said the U.S. should "end its attacks on the Iranian revolution":

Washington's refusal to accept the offer of the Iranian parliament for releasing the hostages shows once again the U.S. government's total lack of concern for their safety and wellbeing. The proposals from Iran are simple and just: no U.S. military or political involvement in Iran; unfreeze the Iranian assets; cancel all claims against Iran; and return the shah's stolen wealth. If granted, the hostages would immediately be freed. [...] We should demand that the U.S. government immediately agree to the proposals from Iran-with no strings attached-and end its attacks on the Iranian revolution.

We did not find any public statements by Sanders on the subject of the Iran hostage crisis, so the claim that he expressed support for Khomeini was false, and a clear case of "guilt by association" with the utterances of Pulley and the SWP being transferred on to Sanders because of his links to both.

A spokesperson for Sanders' 2020 presidential campaign indicated he was opposed to SWP policy on Iran at that time, telling Snopes: "Senator Sanders did not think the hostages were spies nor did he support their captivity. Any suggestion otherwise is nonsense."

However, Sanders' disagreement with Pulley and the SWP on the Iran hostage crisis was demonstrably not strong enough to prompt him to sever ties with either, given that the future U.S. representative and senator continued to speak at SWP campaign events after the hostage crisis and supported the party's presidential candidate four years later.

Image caption: Bernie Sanders, then Mayor of Burlington, Vermont, in his office at City Hall on March 1, 1985.

Abbey, Alan.  "Burlington Immigration Office May Get Role in Socialist Probe."     The Burlington Free Press.  21 May 1981.