Bernie Sanders famously flew coach through much of his campaign, but that may have changed after he was placed under Secret Service protection and the primary season got busier. 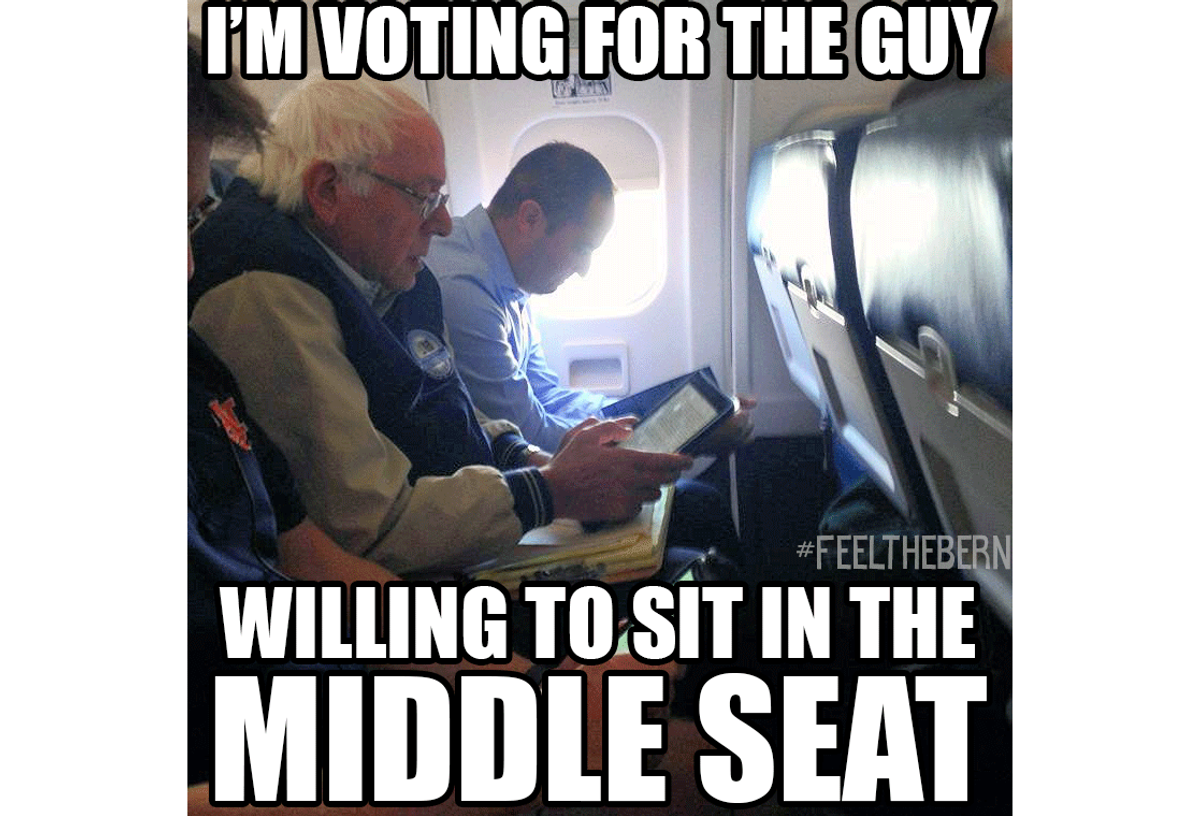 Bernie Sanders typically flew coach through at least early 2016, until he entered a busy primary season and was placed under Secret Service protection.

Sanders only travels by coach on commercial flights.

In late December 2015, supporters of Sen. Bernie Sanders' presidential bid started the Twitter hashtag #SandersOnAPlane to highlight instances of the candidate sitting in coach — just like "regular" folks — as he traveled from stump to stump:

I forgot how much Bernie warms my heart ? He flies coach with us too. #SandersOnAPlane pic.twitter.com/nhaeI9k6rd — no (@ineedanatlas) December 7, 2015

Leaving Las Vegas - look who's on my flight. And for the record the Senator flies southwest #demdebate pic.twitter.com/pTUL6n2I8N — john vause (@vausecnn) October 14, 2015

Sanders' penchant for flying coach came up in conversation during the Democratic hopeful's March 2016 appearance on Jimmy Kimmel Live (which referenced a photograph of Sanders that appeared on the Internet in November 2015):

Through late December 2015 photographs of Sanders flying coach intermittently peppered social media, although a few instances appeared to be cases of mistaken identity (as seen in the example block at the head of this page). Some articles contrasted Sanders with rival Democratic contender Hillary Clinton (although the latter also traveled on commercial flights at the outset of her presidential campaign):

A stream of images are posted under the hashtag #SandersOnAPlane — including one showing the Brooklyn native sneaking in some computer time while sitting between two passengers ... It's an unmistakable contrast with Clinton, who has taken heat this election cycle for taking trips on Gulfstream jets and for banking millions on the speaking circuit.

On 31 December 2015, ABC News inquired about the senator's increased use of chartered air travel, and his campaign maintained that the increasing demands of primary season made it impossible for the senator to consistently travel commercial:

His campaign spokesman Michael Briggs [said]: "Bernie is running for president of the United States and his campaign requires him to travel to many communities in Iowa and New Hampshire and other places as efficiently as possible to meet voters and to answer their questions."

"While he has used commercial airlines on almost all occasions, there are circumstances when using charter airplanes is the best way for him to get around the country and communicate with as many people as possible."

Around the end of December 2015 sightings of "Sanders on a Plane" dropped abruptly, possibly due to logistical reasons: On 30 January 2016, media outlets confirmed Sanders had been afforded Secret Service protection. Indeed, shortly after Sanders' new Secret Service detail was announced, a Vermont-based newspaper reported that his campaign had chartered a plane to travel to New Hampshire:

Yes, almost beating Hillary Clinton in the Iowa caucus helped, but a more tangible sign was that the campaign had chartered a jet to make the trip from Des Moines to Manchester, New Hampshire for immediate deployment for the Granite State's primary on Feb. 9. Sanders famously travels coach on commercial airlines. Sightings of him stuffing his luggage into the overhead bins is a minor Internet meme.

When we contacted the Secret Service to ask whether individuals under their protection were prohibited from commercial air travel (or similar transport), the representative with whom we spoke said that protectees (particularly foreign dignitaries) travel commercially "all the time" and mentioned that Vice-President Joe Biden was known for his use of Amtrak to travel to and from Washington, D.C. while under the protection of the Secret Service. However, a May 2015 article about Hillary Clinton's campaign travels highlighted how difficult it is for candidates to move about via commercial flights while under Secret Service protection:

Hillary Clinton has traded private jets for seats on commercial airlines as she embarks on her second, humbler presidential run. But even in this relatively more democratic mode of transit, the former secretary of state is mostly kept apart from the everyday Americans her campaign wants to champion.

Clinton does not fly the commercial the way you fly commercial. Thanks to strict security concerns, Clinton is insulated from the public from the moment she arrives at one airport to the time she leaves the second one. And even when trapped in a metal tube in the sky with fellow passengers, there are few opportunities for public interaction.

While the insulation is largely outside of Clinton's control and determined by the Secret Service, it underscores the logistical difficulties Clinton will have in connecting with ordinary voters on her second campaign.

Bernie Sanders did fly coach for much of the early part of his presidential campaign and began using chartered air travel as the primary election season got busier. During that time, Sanders was placed under the protection of the Secret Service, which although it didn't preclude commercial air travel, likely added to the campaign's travel considerations (which already involved closely-spaced races in multiple states and the need for timely arrival at rallies and events). Whether Sanders has merely cut down or ceased flying coach entirely isn't clear, but he has flown first- or business-class (and via charter) as his campaign has progressed.

In any case, Sanders isn't the only prominent political figure observed traveling in coach: In 2014, former Republican presidential nominee Mitt Romney (known partly for his personal wealth) was spotted by many social media users sitting in economy class.