Did Ben Franklin Leave $2,000 Each to Boston and Philadelphia?

The inventor clearly had a lot of faith in the future of the U.S. 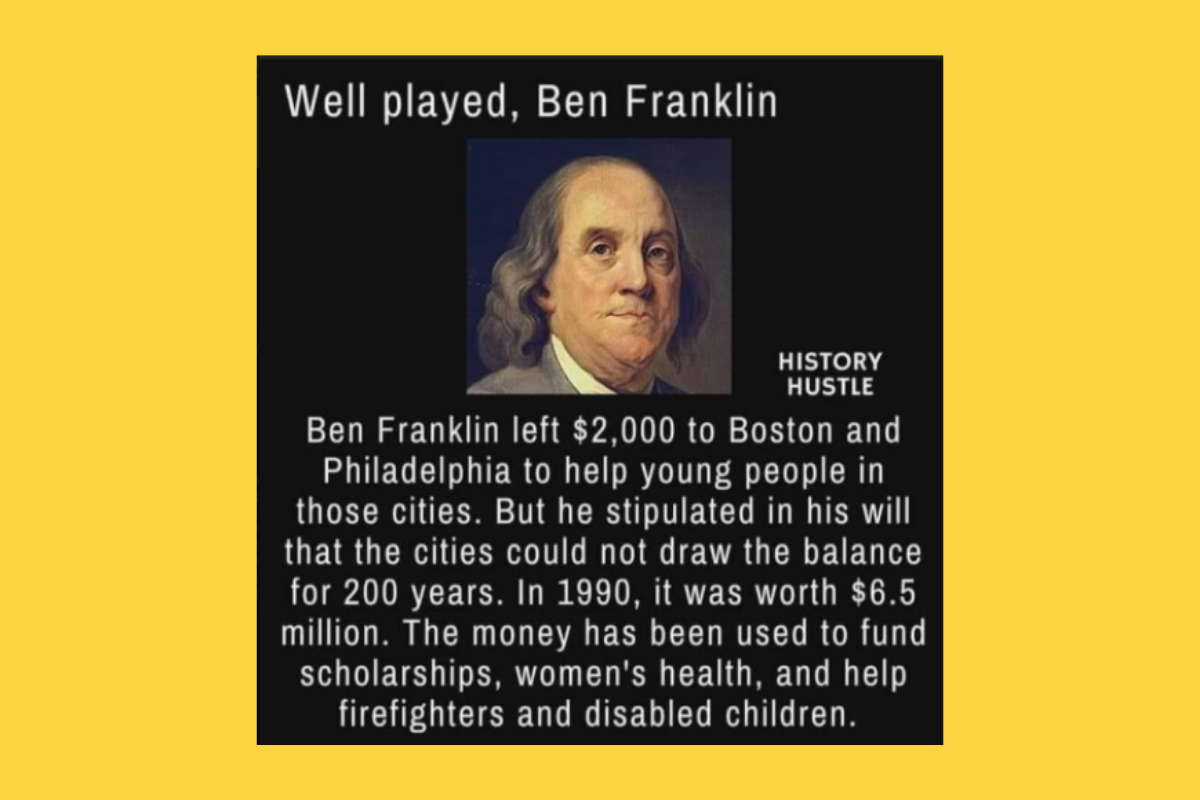 Claim:
Upon his death, Benjamin Franklin bequeathed $2,000 each to the cities of Boston and Philadelphia to be invested in community philanthropic initiatives 200 years later.
Rating:

In the year preceding his 1790 death, Benjamin Franklin bequeathed $2,000 each to the cities of Boston and Philadelphia to be invested in community philanthropic initiatives 200 years later.

And according to The Franklin Institute, a science museum in Philadelphia, Pennsylvania, it’s true. Franklin bequeathed the cities of Boston and Philadelphia that sum upon his death in 1790.

“While Franklin is well-known for his scientific accomplishments, he also was quite a successful businessman (although certainly not a billionaire). Upon his death in 1790, he left a large amount of his fortune to the cities of Boston, where he was born, and Philadelphia ... A reasonable portion of that money has gone on to support organizations including The Franklin Institute,” wrote the Franklin Institute.

The Pennsylvania-based philanthropic organization Centre Foundation, which also received funds from the Ben Franklin Fund, noted that Franklin left $2,000 to the city of Philadelphia and another $2,000 to the city of Boston and directed both governments to forego drawing the funds for a century and distributing for two.

“The funds were invested, and after the first 100 years, the funds began making personal loans to the citizens of Philadelphia. After the 200 years were up, the State of Pennsylvania directed the money to be split between most of the community foundations in the state,” wrote the Centre Foundation, who has distributed grants from the funds to charities in various counties around the state.

According to a now-archived article published by The New York Times at the time of the 1990 disbursement, the $2,000 fund in the Boston trust, meanwhile, was worth about $4.5 million.

The scientist, inventor, and ultimately philanthropist is credited with saying, “If you would not be forgotten, as soon as you are dead and rotten, either write things worth reading or do things worth the writing.”

“10 Reasons Why Benjamin Franklin Was Actually A Superhero.” The Franklin Institute, 18 Mar. 2016, https://www.fi.edu/benjamin-franklin/10-reasons-why-benjamin-franklin-was-actually-a-superhero.