Memes assert Ben Carson benefited from welfare early in life, only to say such programs caused the "disintegration of the family unit" and "enslav[ed] African-Americans." 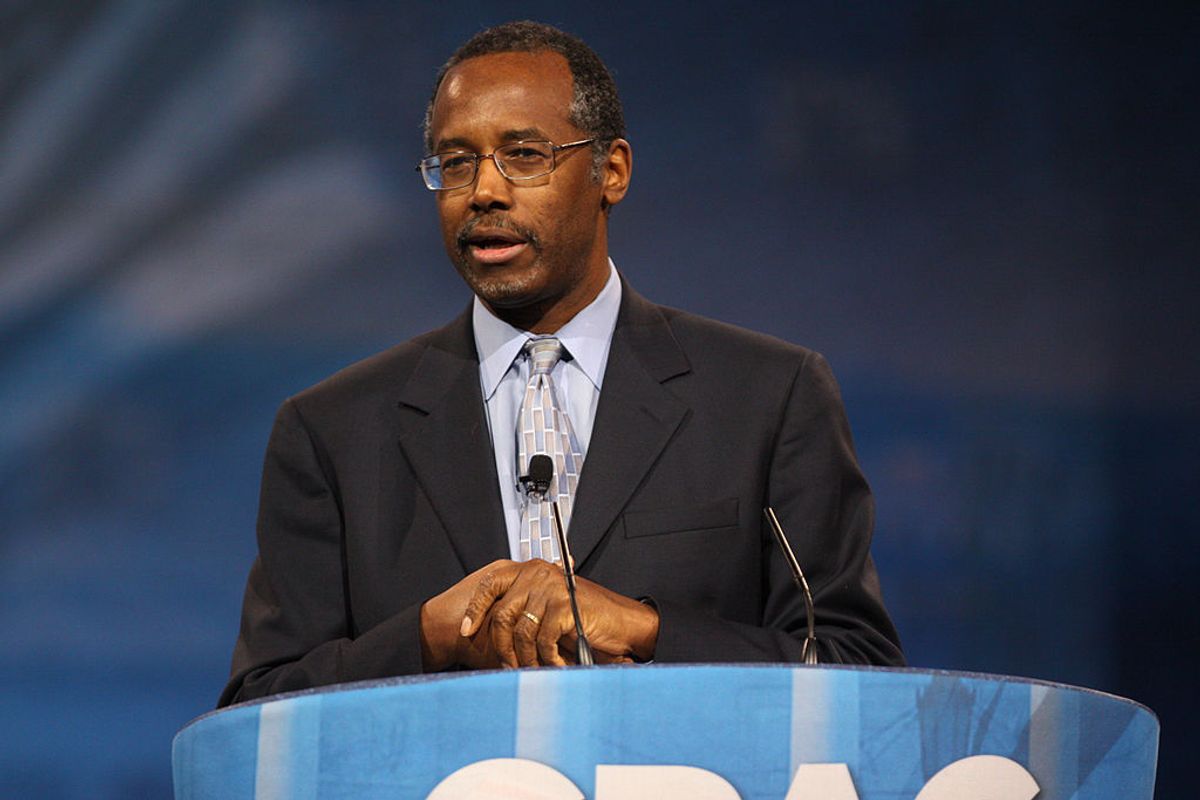 Claim:
Dr. Ben Carson said the "disintegration of the family unit and the welfare state are enslaving African-Americans and ruining their futures" but received help from such programs in his youth.
Rating:

Ben Carson experienced periods of poverty in his youth, and his family intermittently relied on government assistance (primarily food stamps).

Ben Carson did not say the "disintegration of the family unit and the welfare state are enslaving African-Americans and ruining their futures."

An initially unlikely but clearly formidable contender for the 2016 Republican nomination has been Dr. Ben Carson, a former neurosurgeon and relative newcomer in the race to the White House. Unlike Chris Christie, Rand Paul, Mike Huckabee, or Donald Trump, Carson was neither a career politician nor a nationally known name.

Carson became somewhat of an overnight sensation following an appearance at the National Prayer Breakfast in February 2013. Prior to that point he was not widely recognized as a political force, but he quickly gained traction among conservatives and was soon short-listed as a top pick for 2016. A strength of Carson's campaign was often been described as a sort of ideological purity, espoused in a quote attributed to him (which is almost always included as the conclusion to the meme shown below): "The disintegration of the family unit and the welfare state are enslaving African-Americans and ruining their futures." The earliest versions of the meme date to at least December 2014 and include that remark. Many of the users sharing the meme cited a 23 May 2014 Wonkette post titled "Ben Carson So Glad His Welfare Mom Wasn't Dependent on Government" as a source, but the sentence in question appeared nowhere on that page.

What was included was a transcribed comment from Carson made during an episode of The View in May 2014, but it was markedly different than the version attributed to him in versions of the above-reproduced meme. In that TV segment, a pre-candidacy Carson addressed the issue of health care and stated:

When you rob someone of their incentive to go out there and improve themselves, you are not doing them any favors. When you take somebody and pat them on the head and say, 'There, there, you poor little thing ... Let me give you housing subsidies, let me give you free health care because you can't do that.' What would be much more empowering is to use our intellect and our resources to give those people a way up and out.

Around the same time, Carson was quoted by Politico on then-simmering criticism of his ostensible policies on welfare and social programs. Carson was not a candidate (as he had stated on The View a few weeks later) when he proclaimed:

It's important to bear in mind the quote was attributed to Carson in mid-to-late 2014, but many of his positions were revealed after he announced his candidacy in May 2015. We were unable to find any instances in which Carson was recording as asserting that the "disintegration of the family unit and the welfare state are enslaving African-Americans and ruining their futures."

The legitimacy of the quote was important in the context of the meme: overall, the claims presented Carson as someone who was more than happy to reap the benefits of social programs while later pulling that ladder up for generations of impoverished children who might otherwise be the next successful neurosurgeons. Moreover (as Carson initially pointed out), the quotation itself harbored some racially charged implications, suggesting that Carson's political positions on social programs were inherently less credible than those of his more privileged peers.

As for the claims about Carson's youth, not all were substantiated (and again, several made leaps of logic based on class and race). Carson's mother left his father when he was eight, though he described his parents as "divorced" (implying they were once married). A 2011 profile on the candidate before his entry into politics vaguely covered points asserted in the meme, but whether Carson ever lived in subsidized housing in his youth was unclear. The profile mentioned "projects," but it also seemed to suggest Carson's mother endeavored to avoid government assistance save for food stamps:

When Sonya Carson moved her sons from their modest house in Detroit to live with her brother and his wife in Boston, she scrimped and sacrificed so they could return. When they did, they had to settle for Detroit's downtown housing projects — but at least they were home.

Sonya Carson knew the world held more hope for her boys than the ghetto offered. She struggled to support the family without relying on government assistance.

Carson wrote about his family's shame over receiving food stamps in his autobiography Gifted Hands (validating the meme's assertion that his family received them), but the relevant passage also described his family's distaste for accepting help:

I knew [my mother] was trying to keep us off public assistance. By the time I went into ninth grade, Mother had made such strides that she received nothing except food stamps. She couldn't have provided for us and kept up the house without that subsidy.

Carson's tune didn't dramatically change from earlier accounts he had provided. In a 2002 interview (well before the start of his political career) he said of his family's approach to assistance that:

My mother worked as a domestic, two, sometimes three jobs at a time because she didn't want to be on welfare. She felt very strongly that if she gave up and went on welfare, that she would give up control of her life and of our lives, and I think she was probably correct about that. And, so she worked very hard ... She would go to the Goodwill, she'd get a shirt that had a hole and put a patch on it and put another one on the other side to make it look symmetrical, and she sewed her own clothes. She would take us out in the country on a Sunday and knock on a farmer's door and say, "Can we pick four bushels of corn, three for you and one for us?" and they were always glad at that deal. And she'd come home and she'd can the stuff, so that we would have food. She was just extremely thrifty and managed to get by that way. No one ever could quite figure out how she was able to do what she did.

The claim about eyeglasses also appeared in Gifted Hands, where Carson explained that his school provided them to him no cost. But the assertion he was therefore "supported by welfare" is difficult to substantiate, as "welfare" typically describes programs such as SNAP (food stamps), Section 8 (housing subsidies), and Medicaid (health care).

According to the meme, Carson was "kept healthy with Medicaid." But that program wasn't mentioned by name in any extant biographical material that we could find pertaining to Carson, who was born in 1951. Medicaid was established in 1965, so Carson was well into his later youth before the program even existed (much less possibly extended to his family).

We were also unable to substantiate the claim Carson "benefited from affirmative action." Much like Medicaid, "affirmative action" with respect to university admissions didn't exist as it's understood today until after the adoption of the Civil Rights Act of 1964. It's possible that Carson was helped by those social changes just a few years later, but it's also possible that the effects of such initiatives had no impact on his admission to institutions of higher learning.

The meme also claims that Carson's medical school was paid for by a grant from the United States Public Health Service (USPHS), but that assertion appears unique to the meme. Carson made no mention of such a grant in a February 2014 article about his education, and a 2012 Physicians Practice profile suggested Carson had received merit-based scholarships and grants:

Thus began a life of accomplishment -- reaching the highest rank in junior ROTC in high school, a full scholarship to Yale, medical school, Johns Hopkins. Yet he credits much of it to his mother, who would tell him, when he complained about a seemingly impossible problem, that if he had a brain he could think his way out of it.

"She cleaned other people's houses, but she never developed a victim mentality and she didn't let her kids develop one, either," he said. "When people stop accepting your excuses, something happens pretty fast: You stop looking for excuses, and you start looking for solutions."

A 1992 profile of Carson in Fortune similarly referenced merit-based "scholarships and grants":

Graduating third in his class at Detroit’s Southwestern High, Carson had only $10 to spend on college application fees. He decided to apply to whichever school won that year's College Bowl, then a popular TV quiz show. Yale's ouster of Harvard determined his next move. Scholarships and grants helped pay the aspiring doctor's way through Yale and the University of Michigan School of Medicine.

(Incidentally, Carson told ABC's George Stephanopoulos during an October 2015 interview that medical school should be paid for by the government.)

Carson's late-in-life entry into politics made it easier for misconceptions about his life to proliferate, but the quote that closes this meme (and establishes its conclusions) doesn't appear to be anything more than an amalgam of what folks believe Ben Carson might have said.

While Carson wasn't always a politician, he was a well known neurosurgeon with some accumulated press attention at the time he entered politics. Throughout the years Carson was candid about his disadvantaged childhood but never claimed to have benefited from more than food stamps and a free pair of glasses on Uncle Sam's dime. The claims in the meme encompass most programs to which impoverished youth might be eligible to receive today, retroactively implying Carson's path was paved by all of them. But in addition to the apparently fabricated quote which forms the meme's basis, a variety of the points upon which it leans are unproven or chronologically questionable. Carson's critics might judge his approach to government assistance as incongruent with his prior poverty, but the meme seemingly exaggerates the degree to which his family benefited from welfare programs.

On 9 November 2015, the satirical Facebook page "Stop the World, the Teabaggers Want Off" published the image of Ben Carson reproduced below purportedly quoting Ben Carson as saying "My mother raised me with no help from the government. We had food stamps and welfare and Section 8 housing, but we made it on our own. - Dr. Ben Carson, 11/7/15": Carson said no such thing, and the "Stop the World, the Teabaggers Want Off" page featured a disclaimer marking its content as political satire: "This page is for entertainment purposes. It is NOT meant to be taken seriously. It is primarily satire and parody with a mix of political memes and messages."