Can Wolf Eel Bite and Poison You After It's Been Decapitated?

The postmortem muscle spasms of the wolf eel are a scary sight to behold. 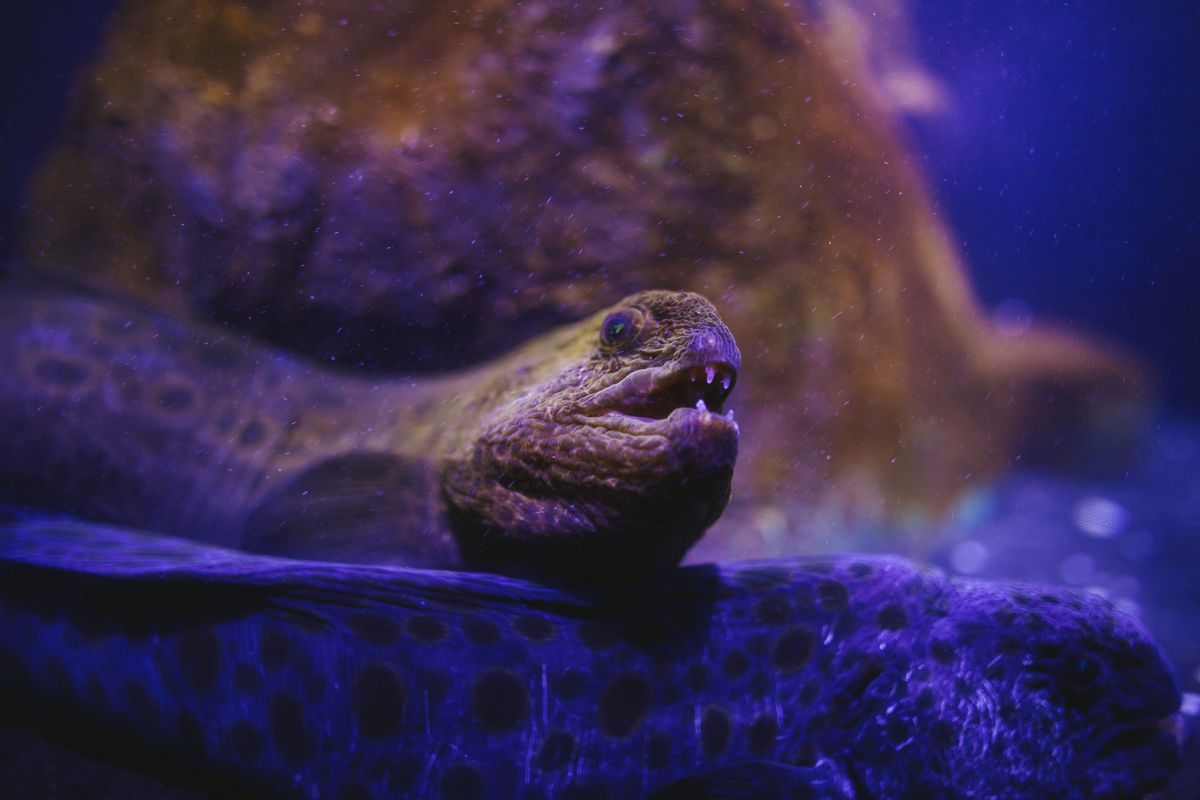 Claim:
A video shows the decapitated head of a poisonous wolf eel biting down on a can of coca-cola.
Rating:

A video shows the decapitated head of a marine creature biting down on a can of Coca-Cola.

However, the wolf eel is not a poisonous (or venomous) species.

We have not yet determined the exact species of creature featured in the video.

In October 2019, an animated GIF purportedly showing the decapitated head of a wolf eel biting down on a can of Coca-Cola was shared to the "WTF" section of Reddit under the title "the head of a Wolf Eel can still bite and poison you after it’s been decapitated":

The head of a Wolf Eel can still bite and poison you after it’s been decapitated. from r/WTF

This is a genuine piece of footage. However, the title of this post contains at least one error: The wolf eel is not poisonous or venomous. Furthermore, the wolf eel isn't an actual "eel." The wolf eel (Anarrhichthys ocellatus) is a species of wolffish that lives in the North Pacific Ocean. The Seattle Aquarium explains:

The eel that’s not an eel

Wolf eels aren’t eels at all—they’re fish, and not the same as true eels. One key distinction is that wolf eels have pectoral fins behind their heads, which is characteristic of fish, not marine eels like morays. Put simply, they’re a just a long, skinny fish!

The above-displayed GIF comes from a longer video that was posted to YouTube in January 2019. The original video appears to have been taken aboard a commercial fishing ship. Filmmaker Rúni Djurhuus titled the footage "Catfish vs. Coke," but the marine species in the video is labeled a "wolf eel" and a "catfish wolf eel" in the description:

Don’t stick your hand into the mouth of a dead fish - even after you chop the things head off. Head of a wolf eel that can bite you even after the head is detached from the body.

One reason for the confusion may relate to this fish's nickname, the "ocean catfish." We compared stills from the GIF with photographs and believe that the marine creature featured in this video is indeed a wolf eel. We've reached out to the Marine Conservation Institute to confirm and will update this article when more information becomes available.

The original video also provides some insight into how and why this decapitated fish head bit down on a can of Coca-Cola. While some viewers hypothesized that this fish head was still alive when this video was filmed, it's likely that the footage shows an involuntary muscle reflex. The original video shows that this fish was decapitated just before a Coke can was pushed into its jaws. It's likely that the fish's nerve endings were still functioning, and that pressure near its jaw triggered a muscle spasm.

In June 2018, after a man in Texas was bitten by a decapitated rattlesnake head, National Geographic and Science Alert penned articles explaining the phenomena:

The bodies of snakes often writhe around for some time after they are dead, says Bruce Jayne, a biology professor at the University of Cincinnati. It’s a similar reflex to that of a headless chicken being able to run around for a short time, Jayne says. The mechanism behind this eerie behavior is a nervous system pre-programmed to make certain movements without the brain needing to send a signal. And a decapitated venomous snake head is evidently pre-programmed to bite in response to a stimulus—such as a someone trying to pick it up, he said.

Snakes and other cold-blooded animals such as fish and amphibians, on the other hand, don't thermoregulate internally, instead relying on outside sources for warmth. Because their bodies aren't generating their own heat, their energy and oxygen requirements are lower.

This is how some cold-blooded, or ectothermic, animals are able to survive conditions without oxygen for periods of time.

And it's why snakes (and other reptiles) continue to move after being bisected. As seen in the below video, the body will reflexively writhe for a time after being cut off the brain - but the head itself can remain "alive", and likely on the defensive because of the pain of being chopped. It will attempt to bite whatever it can - even its own wriggling body.

The wolf eel may be scary looking and may have a powerful bite, but these fish aren't aggressive. In fact, these friendly fish are a favorite among scuba divers. The eel-like fish can grow up to 8 feet in length and subsists on a diet of sea urchins, mussels, and clams, which it can eat thanks to its powerful jaws:

The friendly, but fierce looking wolf-eel is a favorite of Pacific Northwest divers. They can often be spotted peering out of the many crevices and holes in popular local dive sites. When lured out of their dens in search of their favorite food (Sea Urchins), this impressive fish is a sight to behold, growing to a maximum length of 8’. While not a true eel (eels have no pectoral fins), wolfies are actually a fish with an elongated body and are referred to by scientists as a “wolf-fish”.

Don’t judge a book by its cover with wolf eels. It’s not an eel, but a long, slender fish. It’s not aggressive like its sharp teeth suggest, but generally gentle. Wolf eels also form one of the sweetest pairings in the sea: they mate for life and huddle together in a rocky cave or crevice. They are dedicated parents, with both partners guarding the eggs and their territory. In the cold Pacific waters of their range, that sounds like the perfect way to keep warm!

Updated [28 July 2021]: This article was updated from "Mostly True" to "Mixture" to better reflect the findings of our report. The video is real, but the caption is misleading.