Is This 'Beat Your Wife Tonight' Ad from the '70s Real?

There are so many "politically incorrect" vintage ads out there that it can be hard to tell the real from the fake. 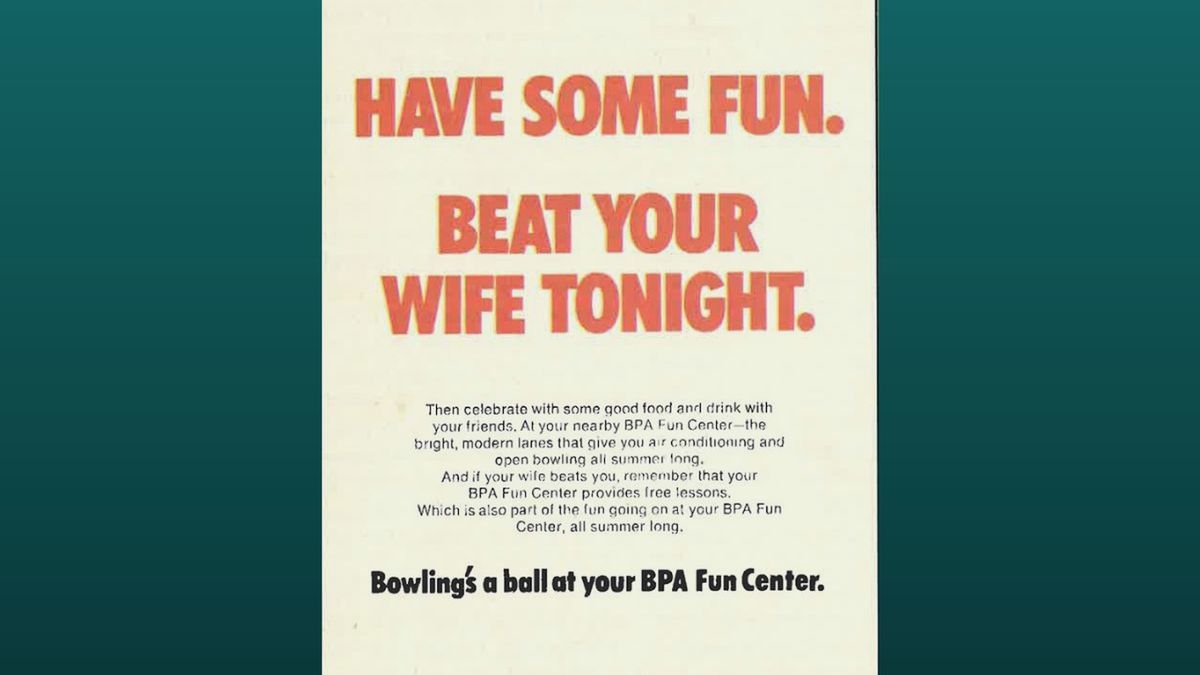 As we've noted a few times before, viral images of "politically incorrect" ads from newspapers and magazines of the previous century are not only quite common these days, but quite commonly fake. Fake vintage ads are popular on social media because it hasn't escaped most people's notice that the real advertising from that era can look so outrageously inappropriate to our eyes that it fairly begs for parody. Sometimes it's difficult to tell the spoofs from the real thing.

For example, the advertisement below allegedly ran in newspapers and on billboards in the early 1970s, and appears regularly in online memes: 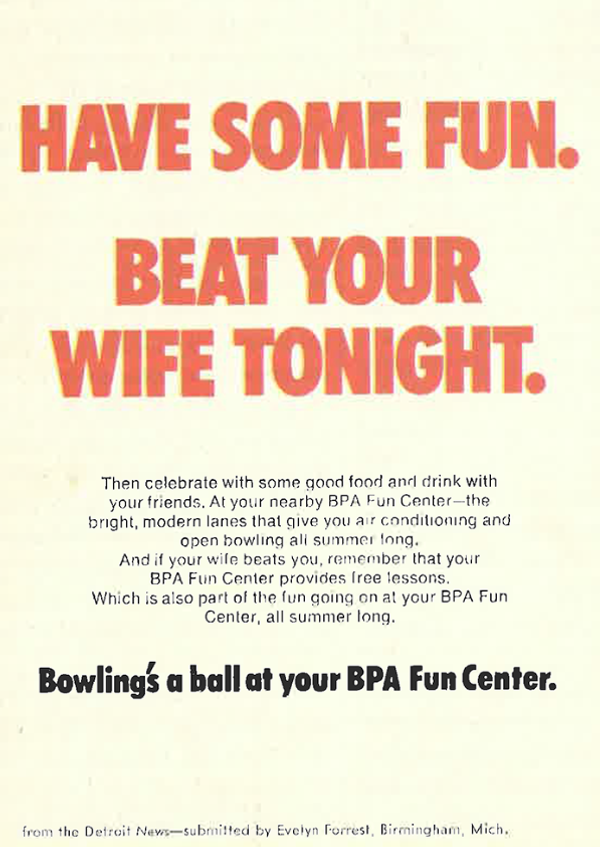 This is a real ad, first published in 1973. Interestingly, it was notorious almost from the get-go. In the first mention we found of it in the news media, Detroit Free Press columnist Bob Talbert wrote on May 4, 1973:

Rob Burton of "Burton Sohigian Inc." tells me the Detroit Bowling Proprietors Association is having a whale of a time with its new punny tongue-in-cheek ad campaign that states: "Have Some Fun. Beat Your Wife Tonight." With this tagged at the bottom: "Bowling's a ball at your PBA Fun Center" ...

The "fun" wasn't destined to last, though. By July, "women's liberationists" had defaced a billboard bearing the slogan on the outskirts of Detroit, United Press International (UPI) reported.

"Have some fun, beat your wife tonight."

That billboard inscription, used as part of an advertisement promoting bowling as a family activity, has raised the ire of one or more women's liberationists.

And Cass Sicilia, executive secretary of the Bowling Proprieters Association of Detroit which paid for the sign, may never hear the end of it.

Friday, it was discovered that somebody had painted out the word "wife" and spray painted over the entire sign in large letters the word, "obscene."

Sicilia said that incident followed a series of letters and threatening telephone calls he has received regarding the sign, located alongside the John Lodge Freeway.

The contemporaneous press coverage was routinely condescending towards women who voiced their objections to the ad campaign. "Sign Brings Out Libbers," read one headline placed atop the syndicated UPI story, which ran throughout the country. "Ad Brings Bowling 'Bawls," read another. A columnist for the Amarillo Globe Times weighed in:

Some members of the women's liberation movement objected strenuously to an advertisement that said, "Beat your wife tonight." It was an ad advising men to take their wives to a bowling alley and beat their wives in a game of ten pins. We can be plumb ridiculous sometimes without half trying.

Meanwhile, the concept was being unashamedly copied elsewhere. This ad appeared in the Lansing State Journal in July 1973: 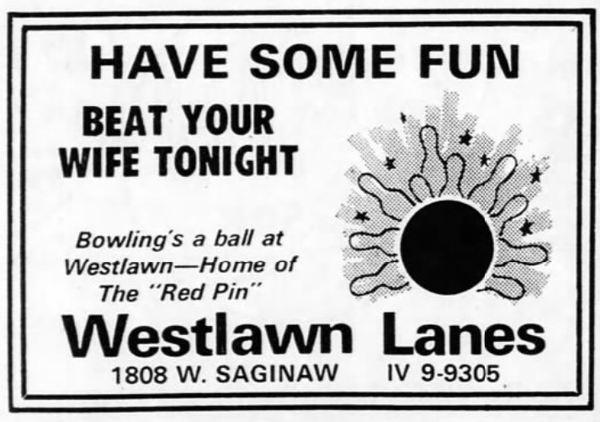 By then, the Detroit ad campaign had caught the attention of Ms. magazine, which published a copy of the ad in its July 1973 "No Comment" section, which was devoted to flagrant examples of sexist advertising. It made a lasting impression on the feminist movement and achieved iconic status in the fight against domestic violence. In a 1980 article on the growing feminist backlash against depictions of violence against women, Chicago Tribune writer Barbara Brotman featured it prominently in the lede:

The lights flicked off and the slides began flicking by. A fashion photo of a man striking a woman in the face as she reels in pain. A woman being dragged across the floor, clutching at a man's moving feet, to advertise perfume. An ad for a bowling alley that said, "Have some fun -- beat your wife tonight.

Netta Gilboa, who began collecting these pictures three years ago, was vocally appalled. "That's how we're seen in these pictures," she told a small group of women gathered in the YWCA in Evanston, Ill., to see her slide show. "Women are just meat."

To this day, the "Beat Your Wife" ads are cited in discussions of domestic violence and the long struggle to raise awareness of it as a serious issue in a culture that much preferred to treat it with belly laughs and sweep it under the rug.