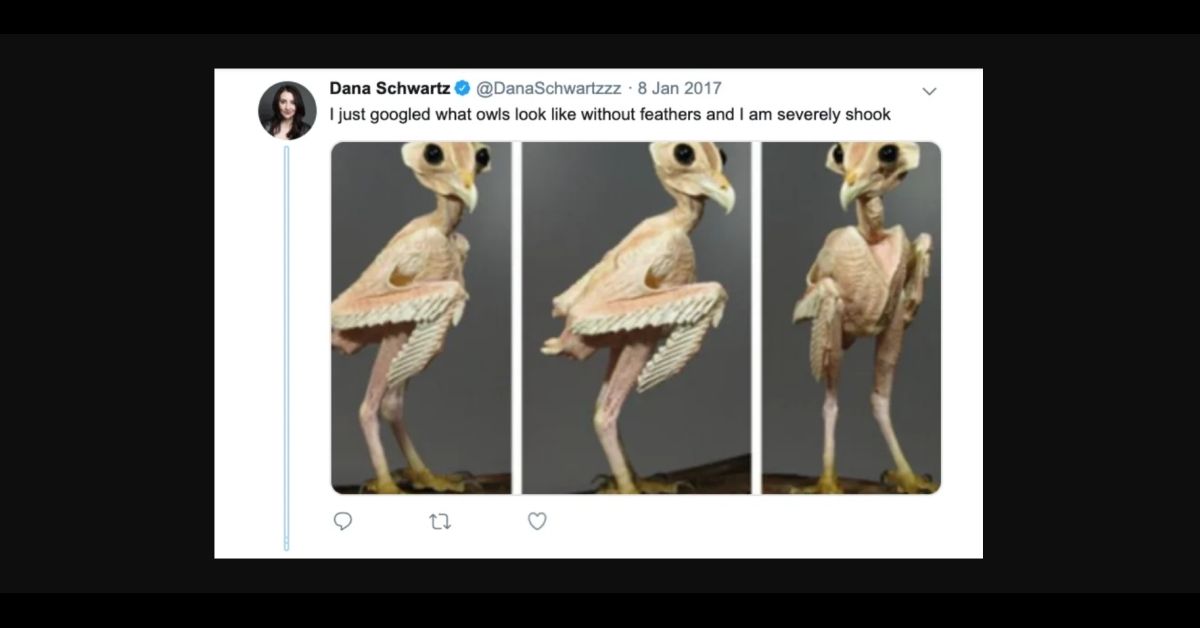 Claim:
A widely circulated photograph showed what “naked” barn owls look like beneath their feathers.
Rating:

Photographs of “naked” owls ruffled the internet’s feathers — even though the raptors appeared to lack their own.

Widely shared photos of the featherless skeletons of barn owls went viral in January 2017 when writer Dana Schwartz shared in a Twitter post what the nocturnal birds supposedly look like underneath it all. (Though the original tweet is now unavailable, it has been archived here for reference.) Bet Lott, a raptor specialist at the Audubon Center for Birds of Prey, confirmed to Snopes that the above photograph does indeed show an owl without its feathers.

The owl in question is a barn owl — scientific name Tyto alba — known for its ghost-like appearance and rasping shrieks. Reaching a height of about a foot tall, barn owls are found on all six continents and particularly enjoy hanging out in barns in hopes of feeding on mice and rats, as the raptor’s name suggests. Because their hunting depends on stealth, the feathers on owls are specially adapted to help the birds camouflage with their surroundings and remain relatively silent when flying.

The wings of owls are large compared to their body size and weight and are equipped with a perfect combination of characteristics that allow them to fly and hover effortlessly and silently.

“The outer edges of their forward wing feathers have a stiff fringe, like the teeth of a comb. The rear wing feathers have a soft, hairlike fringe. These fringed edges soften the flow of air as it moves over the wings,” notes the Owl Research Institute. “The fine velvety surface of the flight feathers absorbs the noise the feathers make as they slide over one another.”

Additionally, owls tend to look much larger than they really are because they are laden with these specially designed feathers.

“Besides flying, the feathers are used to help insulate themselves from heat & cold, they repel water, they help assist in determining sex, age & species, helps with camouflage, and helps communicate behavior,” said Lott.

And though barn owls have a differently shaped skull than many other birds, Lott said that all birds look quite a bit different “naked.” The skull of a barn owl without feathers. Didier Descouens/Public Domain