Is the Barbie Ouija Board in This Photo Real?

Could one of Barbie’s countless hobbies involve the occult? 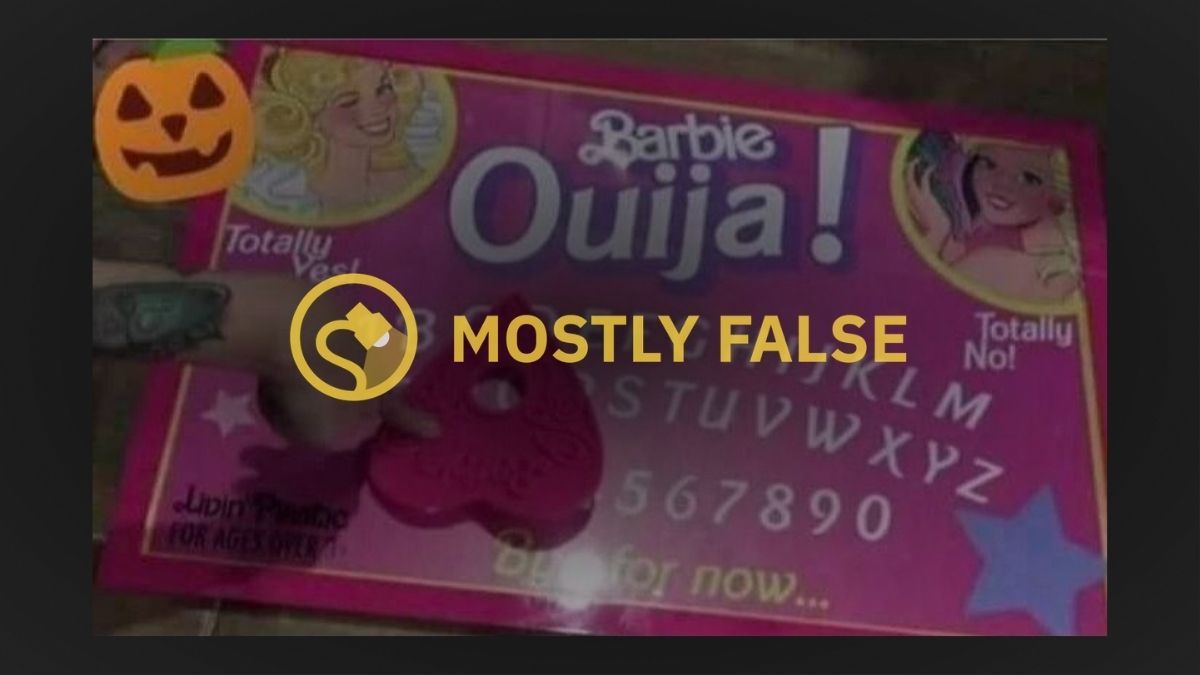 Claim:
An image shows a real Barbie-themed Ouija board game by Mattel.
Rating:

The image appears to show a real creation of Servando Hernandez, an artist who uses the handle Livin' Plastic on social media.

This is not official merchandise from Mattel, which owns Barbie’s brand. The Ouija trademark is owned by Hasbro, their rival.

A Barbie-themed Ouija board intrigued Reddit users in January 2021 because of the unusual combo of one of the world’s most popular dolls with the board game known for calling spirits back from the dead.

A low-quality image shared to Reddit appeared to show a board game called “Barbie Ouija!” with a tattooed arm playing the game: This was not an official Mattel product, but we did manage to find the possible source of the image.

On the bottom left corner of the image is the text “Livin’ Plastic.” That lead us to designer Servando Hernández who goes by the handle @livinplastic on Instagram. Based in Mexico City, Hernández frequently shares images of Barbie dolls in unique poses and styles. The Barbie Ouija board was featured on his Instagram account with the hashtag “#notanofficialproduct.” The board game in the image on Reddit may have originated from, or been inspired by, Hernández’s work.

Hernández, the artist behind the game confirmed to Snopes that this was indeed his brainchild: "It belongs to a series of objects created by me. I like to decontextualize Barbie and put her into situations and objects that are not commonly associated with her or bring them to real life."

The originators of Ouija in the United States sold their product to a company that was later bought by toy manufacturer and multinational conglomerate, Hasbro. The Ouija name is trademarked by Hasbro, so the games cannot be manufactured by Barbie’s owners, Mattel.

Given that the object in the image seems to be inspired or created by an independent artist, but it is unclear if it is a real game available to play, and is not an official product of Barbie’s parent company, we rate this as “Mostly False.”