Did a Serial Killer Babysitter Place Barbed Wire Around a Baby Crib?

An odd video purportedly showing a babysitter placing barbed wire around a crib was staged for a "creepypasta" video channel. 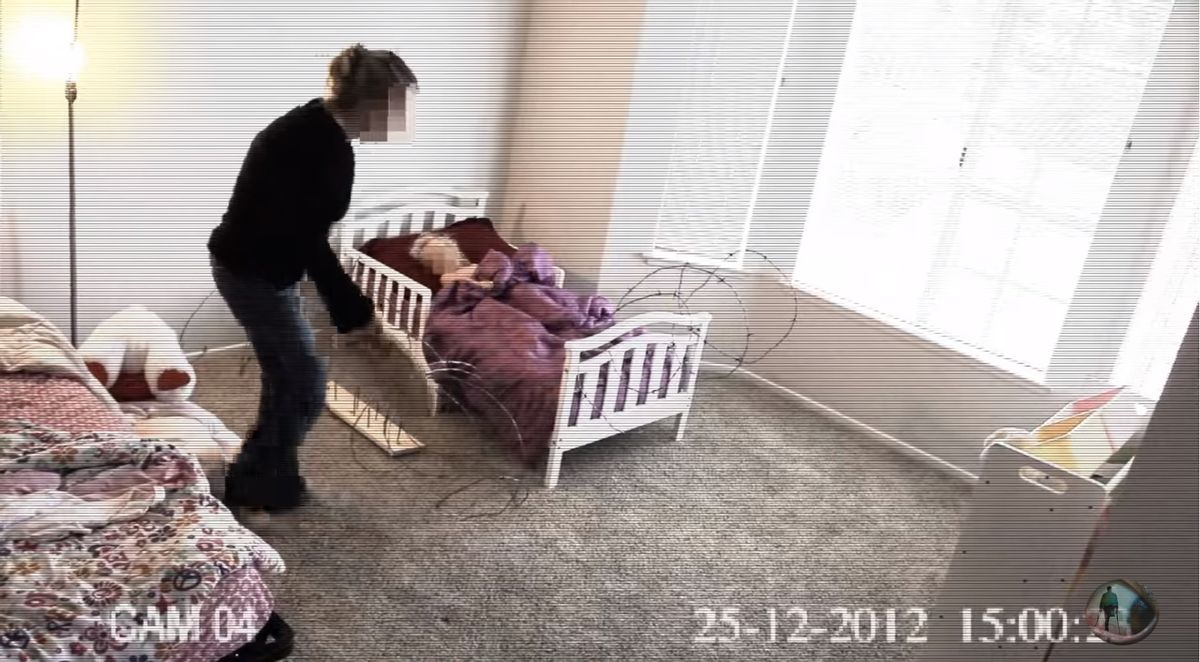 On 7 July 2018, the web site Feedy TV posted an article reporting that a security camera in the home of the Peerc family had captured their babysitter, a serial killer named Nancy James, placing barbed wire around their infant's crib. She is the most FBI wanted criminal and no, this is NOT an abnormal scene of The Addams Family 1995 movie.

You may have watch the movie The Addams Value 1995 when the Addams hired Ms. Debby (a dangerous serial criminal) as the nanny for their new born infant. This family’s case went exactly like what happened in that movie, luckily with a happy ending for the kids.

The Peerc Family hired babysitter Nancy James, from an ad touting discount childcare, on the internet.

After watching this surveillance video, The FBI had their first visual record of notorious serial criminal “Nanny” Nancy James. While the baby here was unharmed, Nancy James (also nicknamed “Cat” by the FBI) was the #1 female on the FBI’s Most Wanted List.

This footage did not originate with a home video surveillance camera, nor did it provide the FBI their first visual record of serial killer "Nanny" Nancy James. This video was staged with actors and props for a "creepypasta" YouTube channel called "Don't Turn Around."

"Don't Turn Around" originally posted this clip in April 2016 along with a brief and fictional story about a serial killing babysitter. The details in that description, such as the babysitter's name, the FBI's involvement, and her purported capture date, were repeated in the 2018 FeedyTV article:

The Peerc Family hired babysitter Nancy James, from an ad touting discount childcare, on the internet.

Give a THUMBS UP if you hope she rots in prison!

After watching this surveillance video, The FBI had their first visual record of notorious serial killer "Nanny" Nancy James. While the baby here was unharmed, Nancy James (also nicknamed "Cat Killer" by the FBI) was the #1 female on the FBI's Most Wanted List until her capture on April, 17th 2015. She is currently on Death Row pending appeal.

The original video's description also included some information about the intent of the video channel — to create "original, exclusive scary videos and creepy pasta" — as well as a disclaimer informing viewers that the baby was never in any danger during the making of this short film:

Don't Turn Around is your home for original, exclusive, scary videos and creepypasta. Look for a new release every Thursday night!

The baby was never ever near the rubber barbed wire during the making of this video. The baby was put into the scene using compositing.

The YouTube channel also offered more descriptive information in its About page: "Don't Turn Around scares you with anthology horror stories, creepy texts, text messages, text stories, short horror films and stuff to creep you out. Best watched with headphone on, lights off and home alone."

The fictional character of "Nancy James" has popped up in at least one other "Don't Turn Around" video. In June 2017, the YouTube channel posted a video about James, supposedly now a substitute teacher, and her creepy book Fishing for Kids.

This is at least the second time that a video made by "Don't Turn Around" was mistaken as genuine by enough people to warrant a fact check from Snopes. In May 2017, some viewers mistook one of the channel's creepypasta videos about a child named "Chloe Jones" being abducted on a school bus as a real-life event.&