Twitter users tried to pin the blame for Katrina relief issues on Obama, though he wasn't even president when it hit New Orleans. 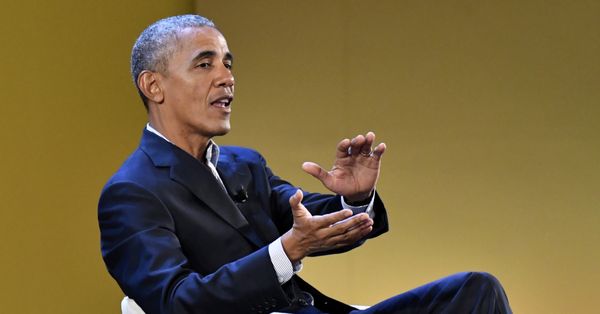 As damage from Hurricane Harvey continued to grow in Texas in late August 2017, some Twitter users sought to defend President Donald Trump's response to the disaster by criticizing the actions of his predecessor, Barack Obama during similarly pervasive flooding in Louisiana in 2016. Other users took that argument even further, knocking Obama for not "doing enough" to help Louisiana during Hurricane Katrina.

The argument that Obama did not do enough after Hurricane Katrina lashed New Orleans, however, ignores the fact that Obama was not president at the time. Katrina made landfall in August 2005, during George W. Bush's presidency. Obama -- who was a Democratic Party senator representing Illinois when the storm hit -- was not elected president until November 2008. However, Obama did meet with Katrina evacuees on 5 September 2005 in Houston, Texas alongside former Presidents Bill Clinton and George H.W. Bush: Ben Nimmo, a senior fellow for information defense for the Atlantic Council's Digital Forensic Research Lab who has written about "bot" attacks, told us that he scanned mentions of Obama and Katrina between 24 August 2017 and 30 August 2017. He said:

The majority of tweets, and the most popular tweets, all mocked the idea of blaming the Katrina reaction on Obama. The anti-Obama messaging does not appear to have penetrated. Of the accounts in the image, one is now suspended and the others show varying degrees of activity; one claims to have been joking. There doesn't appear to be major bot (i.e. automated) traffic involved.

While it is unclear how many of the recent spate of anti-Obama tweets were manufactured or made in jest, an August 2013 survey conducted by the Democrat-oriented Public Policy Polling showed that 29 percent of Louisiana Republicans believed that Obama was to blame for the oft-criticized federal response to Katrina. Another 44 percent were reportedly unsure whether Obama or George W. Bush was at fault, while 28 percent blamed Bush.

That mindset was brought to national television in a September 2016 segment on Comedy Central's Daily Show, which featured a Trump supporter who said he believed that Obama "had a big part" in the 9/11 attacks because he was "never in the office" at the time. When asked why Obama would not have been in the Oval Office during the 11 September 2001 attacks (which occurred more than seven years before he was elected president), the man said:

That I don't know. I'd like to get to the bottom of that.

Correction [31 August 2017]: A previous version of this article included a tweet saying that Obama golfed during "flooding" in Louisiana. We have updated the article to clarify that that tweet referred to 2016 flooding, rather than Hurricane Katrina.

Correction [31 August 2017]: A previous version of this article stated that Obama, George H.W. Bush, and Bill Clinton met with Katrina evacuees in Lubbock, Texas. We have updated the article to clarify that they visited the evacuees in Houston.