The podcaster and Breitbart executive has been described as a "Trump loyalist." 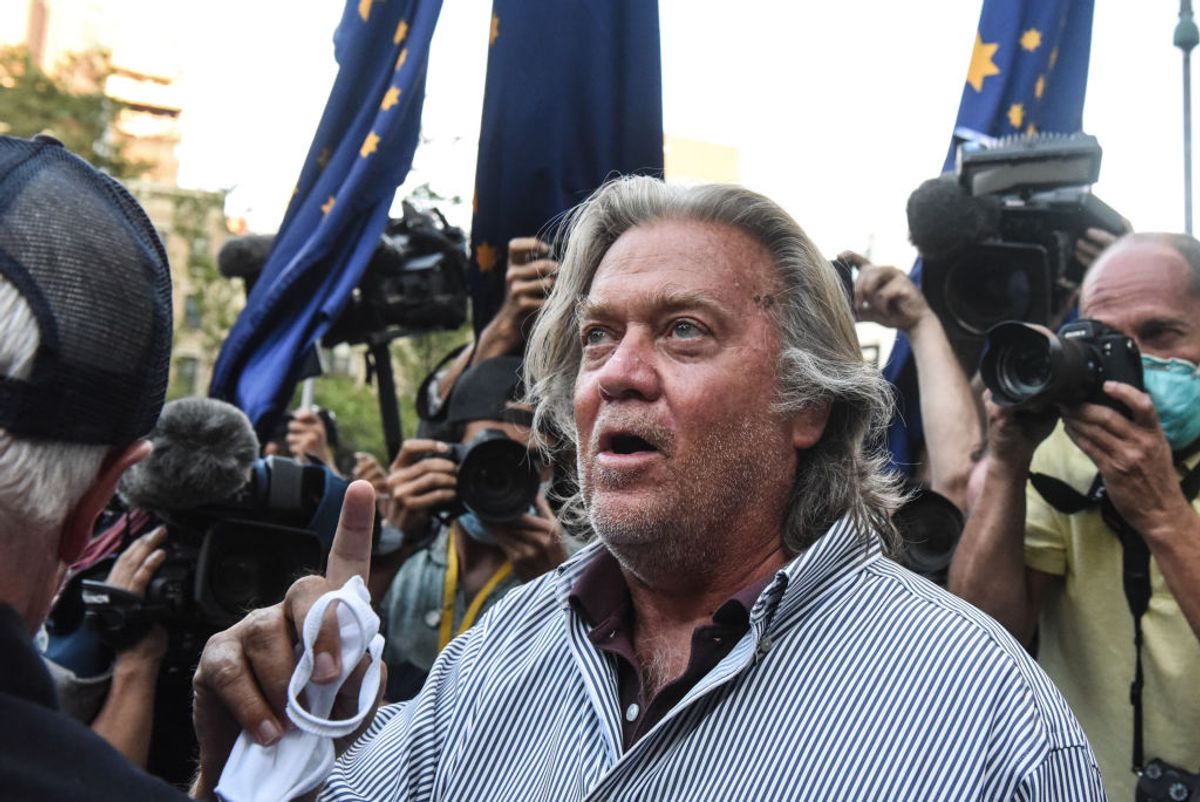 Claim:
Former U.S. President Donald Trump campaign adviser Steve Bannon called for a "second term" to kick off with the firings of NIH Director Dr. Anthony Fauci and FBI Director Christopher Wray, adding that he would put their "heads on pikes" as a warning.
Rating:

While tensions mounted over the presidential election results in early November 2020, former U.S. President Donald Trump campaign adviser Steve Bannon called for a second Trump term to kick off with some firings.

During the Nov. 5, 2020, edition of the Breitbart News executive’s podcast, "War Room Pandemic," Bannon made jabs at National Institutes of Health (NIH) Director Dr. Anthony Fauci and FBI Director Christopher Wray and appeared to endorse violence against them when he said the following:

Now I actually want to go a step farther but I realize the president is a kind-hearted man and a good man.

I'd actually like to go back to the old times of Tudor England, I'd put the heads on pikes, right, I'd put them at the two corners of the White House as a warning to federal bureaucrats. You either get with the program or you're gone -- time to stop playing games.

By the following day, the video had been deleted from all of Bannon’s official platforms, but was still floating around social media, including the below snippet shared on Twitter.

A longer version of the podcast video was shared by Media Matters, a web-based, not-for-profit research and information center dedicated to monitoring misinformation in the U.S. Media. (The video has been archived here for reference.)

A Twitter spokesperson confirmed to Snopes in an email sent Nov. 6 that, "the @WarRoomPandemic account has been permanently suspended for violating the Twitter Rules, specifically our policy on the glorification of violence.” The platform went on to add that statements made by Bannon went against policies in place that address clear threats of violence, abuse and harassment, and hateful conduct. As of Nov. 6, Bannon’s official Facebook page and YouTube channel were both still available online, though it appeared that the video in question had since been deleted. Snopes sent emails to YouTube and Facebook for further comment but did not receive a response at the time of publication. We will update the article accordingly if we hear back.

Bannon and some of his followers have been described as “Trump loyalists,” and it was not uncommon for such groups to go after those whom the president had expressed dislike toward. While testifying in front of the U.S. House Homeland Security Committee on Sept. 17, Wray said that the FBI had “not seen, to date, a coordinated national voter fraud effort in a major election. We have certainly investigated … if I just may finish. We’ve certainly have investigated a voter fraud committed by mail. It’s typically been at the local level.”

When Wray appeared to question and place doubt in Trump’s claims that mail-in ballots would lead to fraud in the 2020 general election, the administration publicly went after the former attorney.

The Washington Post reported on Oct. 21 that Trump and his advisers had “repeatedly discussed whether to fire” Wray after Election Day because of his inability to produce incriminating evidence against Democratic candidate Joe Biden. In an Oct. 8 interview with Fox News Business, Trump furthered that Wray was “disappointing” in that he didn’t “see the voting ballots as a problem.”

Trump has also publicly expressed dismay at the actions of Fauci, who spearheaded the COVID-19 pandemic response since March. In an editorial published by The Hill, opinion contributor Gregory Wallance wrote that Fauci “gets in the way” of Trump’s economic revival strategy following unprecedented nationwide business closures by “telling Americans the truth about the pandemic.” Since the onset of the pandemic, Fauci warned that the worst is yet to come, and urged local leaders to continue to heed the advice of the Centers for Disease Control and Prevention in spite of what the president said.

During a campaign rally in Arizona in October, Trump made fun of Fauci, adding that he was a “wonderful man” but a “bad arm” (around the 15-minute mark).

I saved thousands of lives. He admitted that two months later. Two months later. And Dr. Fauci said, “Don’t put on masks.” You see the thing. And now, he says put on masks, and they say he’s a wonderful guy, and he is a wonderful guy. I like him. He just happens to have a very bad arm. He has a bad arm, but he’s a good guy. He is a good guy. A lot of our people don’t like him. I like him. You have to understand him. He’s a promoter. What can he do? And it’s a choice between the American dream or a totally socialist nightmare. That’s what you’ll have. You’ll be a socialist country. And I said, “Our country will never be a socialist country. We’re not going to let it happen. It’ll be destroyed.”