Are These the Most Banned Books in Public Schools and Libraries in the US?

Classic books in libraries and schools have had many complaints filed against them. 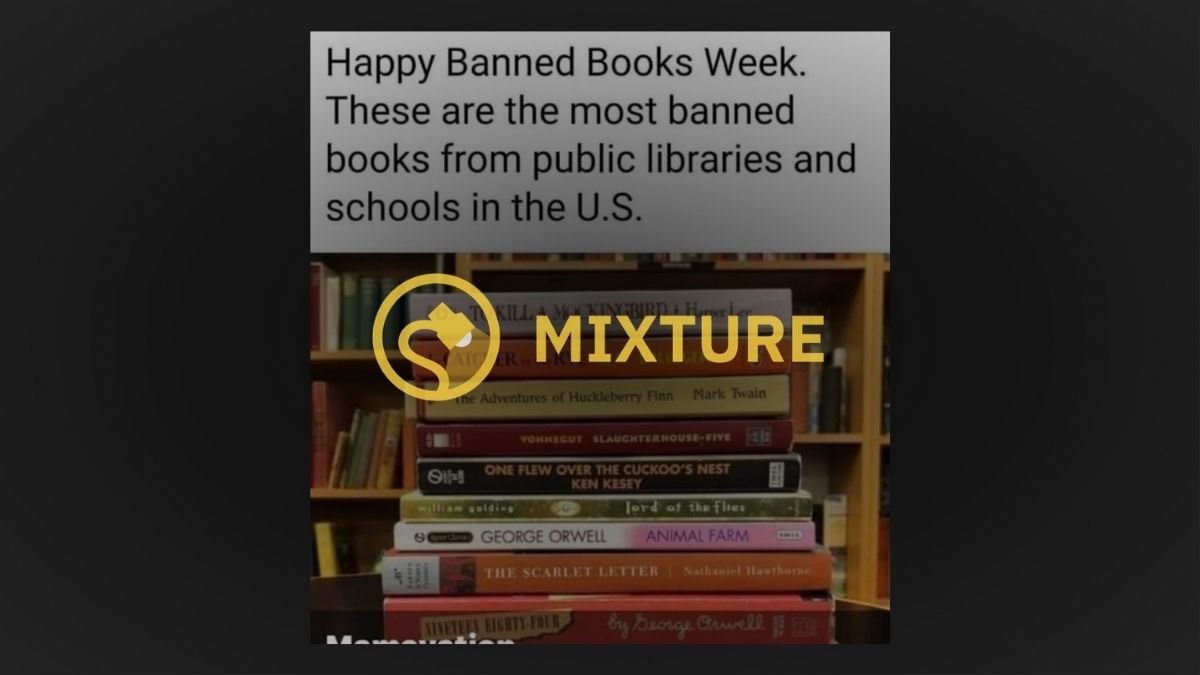 Claim:
A meme accurately depicts a stack of books as “the most banned books from public libraries and schools in the US,” including books like “To Kill a Mockingbird,” “The Catcher in the Rye,” “Animal Farm,” “The Scarlet Letter,” “1984,” and more.
Rating:

“To Kill a Mockingbird,” by Harper Lee is one of the top ten most challenged and banned books of 2020. The same book, along with “1984” by George Orwell, “The Adventures of Huckleberry Finn” by Mark Twain, and “The Catcher in the Rye” by J. D. Salinger, are among the 100 most banned and challenged books of the past decade (2010-2019), according to the American Library Association.

The remaining books in the meme have been banned and faced challenges in the past, but they do not fall in the top 100 most challenged or banned books in the recent decade.

You may be surprised to learn that your favorite classic books have been banned or sparked controversy in different parts of the United States.

Some of them, no matter how old they are, continue to be targeted, even in the past decade. A meme citing a number of classics claims that "These are the most banned books from public libraries and schools in the U.S." The list, while presenting a number of classics that have indeed either been banned or faced challenges over the course of American history, does not accurately portray the complete story. Some of the books are indeed still among the top banned books in the U.S. today, while some faced more controversy decades ago. The list also does not specify the time period during which these books were banned.

We went through the list one by one, using information gathered from the American Library Association's (ALA) Office of Intellectual Freedom that compiles "reports from libraries, schools, and the media on attempts to ban books in communities across the country." The ALA's work also includes compiling "lists of challenged books in order to inform the public about censorship efforts that affect libraries and schools."

We should note there are differences between challenging and banning books. According to the ALA, a challenge is an "attempt to remove or restrict materials, based upon the objections of a person or group," while a ban "is the removal of those materials."

The ALA also noted that many of the "top 10" lists of challenged books don't often reveal the full picture. They added that surveys indicate 82-97% of book challenges remain unreported and receive no media.

Here are the books from the meme:

'To Kill a Mockingbird,' by Harper Lee

The Catcher in the Rye,' by J.D. Salinger

Vonnegut's book made it to number 67 of the "100 most frequently challenged books" from 1990 to 1999, and number 46 from 2000 to 2009. A 2011 Atlantic report described how the book was a frequent target of bans or challenges from schools that found its contents to be vulgar, "anti-American," and more. Interestingly, the book did not make the 2010 to 2019 list, making it seem that views on the book have evolved in some cases.

'One Flew Over the Cuckoo's Nest,' by Ken Kesey

'Lord of the Flies,' by William Golding

'The Scarlet Letter,' by Nathaniel Hawthorne

It didn't make any recent lists, including the "Top 100 Most Banned and Challenged Books'' list from 2010-2019, or even in the 1990s. But according to the San Francisco Public Library it caused "moralist outrage" in 1852, and one school district called the book "pornographic and obscene" in 1977. The National Coalition Against Censorship Wiki claims it was banned by Nicholas I in Russia that year, and criticized in the U.S. for promoting "bad morals."

Given that all of the books in the meme faced both challenges and bans over a period of time, but some of them were not featured on the ALA's more recent lists, we rate this claim a "Mixture."