Should You Bang or Honk to Save Cats Sleeping on Tires?

Rumor: Drivers should bang on the hood or honk in cold temperatures to rouse cats who may have fallen asleep in wheel wells or elsewhere under a car. 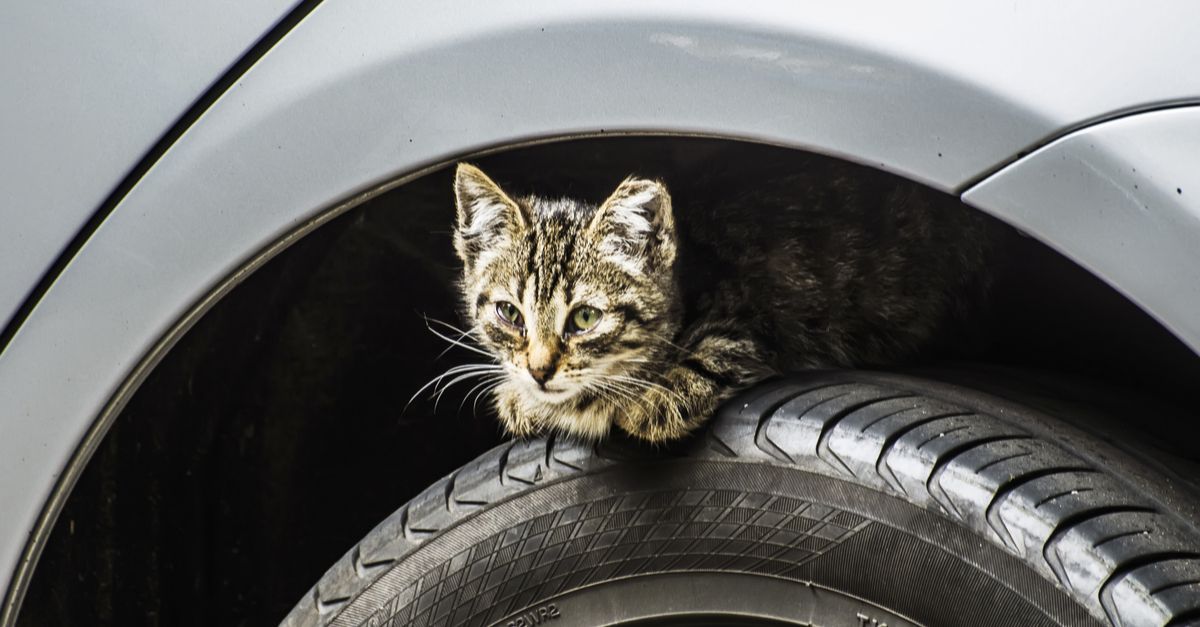 Claim:
Cats have been gravely injured or killed after seeking warmth by hiding in wheel wells or under cars.
Rating:

Social media sites like Facebook have hastened the circulation of warnings about the safety of animals. Such is the case with a common caution to "bang on the hood" of a car or honk in the winter to alert cats who may have taken shelter atop tires or in other concealed places. According to the warnings, many cats who spend all or some of their time outside are killed or injured critically every year after having fallen asleep in or around the cars of unsuspecting motorists, particularly in colder weather.

The advice is so common that former Star Trek actor and social media influencer George Takei referenced it in a post (which included a fake photograph) to his Facebook page on 19 September 2014:

This advice is commonly given, but are outdoor and indoor/outdoor cats truly at risk of injury in this fashion, particularly in colder months? Pet experts confirm that cats (and dogs) have been known to seek shelter in the confines of cars and trucks and that such hiding spots may not always be readily spotted by drivers who themselves may be hurrying to avoid the cold by starting the engine. For example, Dane County Humane Society spokesperson Gayle Viney told the Capital Times that recently-driven cars are particularly attractive to chilly cats:

Cats seeking warmth have been known to crawl into engine compartments in cars that have recently been driven. This can be fatal to the cat if the car is started.

WebMD also offered the following advice to drivers who are concerned about cats seeking shelter in or around their vehicles:

Block off access to the garage. If you suspect a cat could get under the car, honk the horn or bang loudly on the hood before starting the engine. This should wake up the animal and give it a chance to escape or let you know it's there, in which case you can pop the hood and let it out.

As to the frequency of cats being injured after getting stuck or hiding in car wheel wells or engines, Palo Alto Animal Services acting superintendent Connie Urbanski said the scenario is not uncommon. However, Urbanski also noted that the feline behavior was not exclusive to cold weather months:

From mid-May to June - kittens are born and often escape. Each season Animal Services in Palo Alto responds to about 20 calls like Gigi's, Urbanski said, and in about half the cases, the cats end up dying.

Ultimately, cats can and do seek shelter in and around vehicles for warmth and some are injured or even killed when drivers fail to notice their presence. Banging on the hood or honking the horn can wake a sleeping cat and prevent this from occurring, but sheltering cats indoors is the best way to keep them safe from vehicle dangers.