Is a Washington Youth Sports League Playing Soccer Without the Ball?

A spoof CBC report on how competition impacts youth was mistaken by many viewers for a genuine news story. 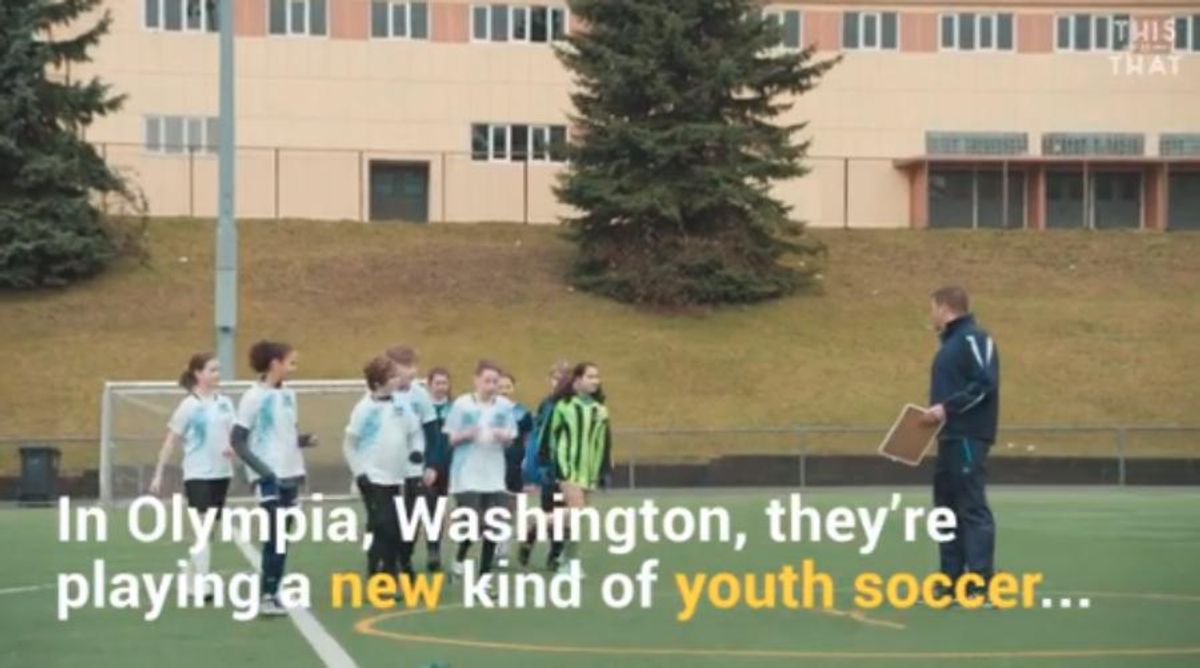 Claim:
A Washington State youth sports league is now playing soccer without the ball in order to minimize the negative effects of competition.
Rating:

In September 2013, the Canadian Broadcasting Corporation's (CBC) "This Is That" radio program aired a segment on an Ontario youth soccer league that was eschewing the use of a soccer ball in all games and practices to eliminate any sense of winning and losing sides, and any sense that one child was a more skilled soccer player than another. Instead, children would substitute their imaginations for the actual use of a ball and claim whatever outcomes they desired. "If you imagine you're good at soccer, then, you are," a league spokesman was quoted as saying:

With the growing concern over the effects of competition in youth sports programs this summer, many Canadian soccer associations eliminated the concept of keeping score. The Soccer Association of Midlake, Ontario, however, has taken this idea one step further, and have completely removed the ball from all youth soccer games and practices.

According to Association spokesperson, Helen Dabney-Coyle, "By removing the ball, it's absolutely impossible to say 'this team won' and 'this team lost' or 'this child is better at soccer than that child.'"

"We want our children to grow up learning that sport is not about competition, rather it's about using your imagination. If you imagine you're good at soccer, then, you are."

In 2017, this radio segment was turned into a video news report, with the scene shifted from the Canadian province of Ontario to the U.S. state of Washington:

Links and excerpts referencing both versions were often circulated out of context on social media, with many of those who encountered them mistaking the story for a genuine news item and responding with expressions of outrage:

This needs to stop. These decisions to over protect our kids are making them unprepared for the future. It is impossible to fail a grade now (very unlike work), there is little to no punishment for actions, no consequences. This creates a child who grows into an adult that is over confident and under qualified to deal with the rest of the world. If you want to help your kids feel better later give them some disappointment now so they learn to deal with it. This is much like people who don't get exposed to germs throughout their lives and end up dying from a cold. These children's emotions immune system is almost non-existent.

What such commentators missed was that the CBC's "This Is That" program is hosted by two comedians, Pat Kelly and Peter Oldring, who fabricate stories satirizing current affairs as a spoof of public radio:

This Is That is a current affairs program that doesn't just talk about the issues, it fabricates them. Nothing is off limits — politics, business, culture, justice, science, religion — if it is relevant to Canadians, we'll find out the "This" and the "That" of the story.

Each week, hosts Pat Kelly and Peter Oldring introduce you to the voices and stories that give this country character in this 100% improvised, satirical send-up of public radio.

This Is That.   "To Ensure Every Child 'Wins', Ontario Athletic Association Removes Ball from Soccer."     CBC Radio.   3 September 2013.

this is that
Read More