A throwback to 2020, these claims attempt to frame legitimately cast mail-in ballots as invalid. 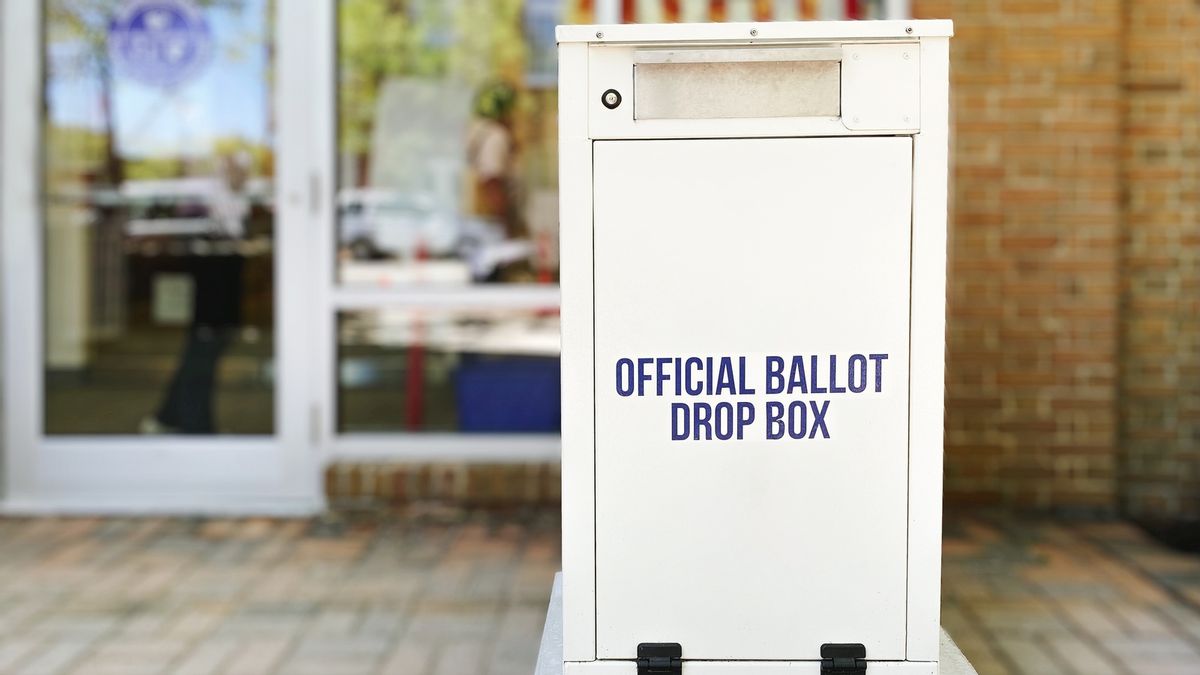 During the 2020 presidential election, far-right conspiracy blog The Gateway Pundit aggressively pushed the notion, still championed by former U.S. President Donald Trump two years later, that nefarious "dumps" or "drops" of allegedly illegitimate ballots pushed Democratic candidates over the edge to win in several contests. Such assertions characterize the fact that absentee ballots —  whose use the GOP has aggressively shunned since 2020  — take longer to count and swing Democratic as evidence of fraud.

Prior to Election Day 2022, many experts suggested that bad actors would frame the addition of mailed ballots to a vote count as evidence of fraud. The Gateway Pundit, after initially declaring victory, predictably delivered these unfounded talking points after it became clear their expectations had not been met. From a terminology standpoint, The Gateway Pundit rebranded "ballot dumps'' as "drop and roll" events, but they refer to the largely illusory concept:

One of the major ways in which the 2020 Election for President was stolen was the method The Gateway Pundit identified and labeled "The Drop and Roll". In the Drop and Roll incidents identified in the 2020 election, we found that at around the point where 90% of the expected ballots were returned, a large batch of ballots was "dropped" with nearly every ballot for Joe Biden.

The Gateway Pundit alleged that "drop and rolls" occurred in several states during the 2022 election including in Michigan, Colorado, Minnesota, and Georgia. "In the Michigan race there were two batches dropped for Gretchen Whitmer that put her in the lead in the race after she had been trailing for hours," the outlet claimed. 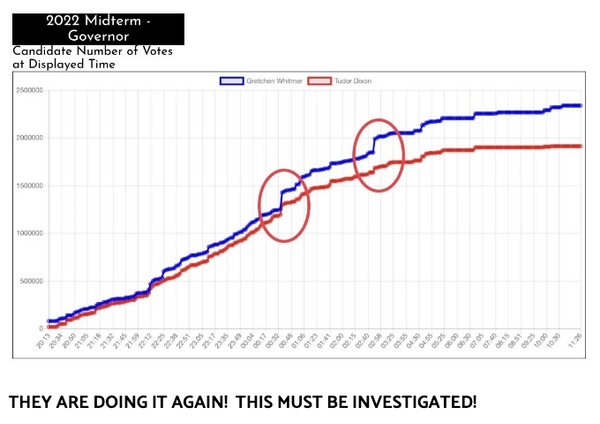 Each of these nearly identical stories makes the same assertion: "These results were not random and clearly not legitimate." The Gateway Pundit provides no evidence, outside of the fact that their preferred candidates did not receive them, that these counted ballots are illegitimate.

"Drop and roll" claims rely on the assertion that large jumps in total vote count and the largely  Democratic skew of those jumps are unexplained phenomena. This is false. The reality is quite simple: Mail-in ballots take longer to count and the de facto head of the Republican Party, Donald Trump, has spent nearly three years telling his supporters to avoid mail-in voting.

Prior to being fed into voting machines, poll workers need to manually open ballot envelopes and verify, among other things, their signatures. This delay is compounded, in some cases, thanks to legislation that forbids poll workers from counting or in some cases even processing ballots before polls close. Such a setup ensures a lag between the time in-person votes are first cast and when absentee ballots first register.

Elections are run differently in each state and even each county. In some cases, larger electoral jurisdictions handle the processing of mail-in ballots from several smaller jurisdictions. Such a reality makes it appear that these votes are "dumped" into the totals, but has no bearing on the legitimacy of those votes.

That many states' mail-in ballots skew toward Democrats is also unsurprising. Since April 2020, Trump has waged an aggressive campaign against the use of mail-in ballots. "I think that mailing voting is a terrible thing," Trump said in April 2020. "I think if you vote, you should go [to the polls]. In that election, 59% of Democrats voted by mail, whereas only 30% of Republicans did the same.

The GOP rhetoric against mail-in balloting has not softened since then. "The lasting impact of his claims has led to stark differences between how Democrats and Republicans view mail voting," the Los Angeles Times reported in October 2022.

In sum, both the presence of large jumps in vote totals and the political distribution of those votes have clear and commonly understood explanations.

"Always in Favor of the Democrat Candidate"

Those sowing doubt about the legitimacy of the American electoral process claim that the aforementioned jumps in votes positively affect only Democratic candidates. "The drops were always in favor of the Democrat candidate," The Gateway Pundit asserted in its multiple "drop and roll" posts. This suggestion is manifestly false.

As New York Times reporter Stewart Thompson pointed out, some jumps in vote total during the 2022 election massively favored the GOP candidate, including one that benefited pro-Trump Arizona gubernatorial candidate Kari Lake. "This jump is for Kari Lake!" he tweeted, "yet the streamers have totally ignored it. Meanwhile they point to identical spikes in Minnesota and Michigan as 'clear fraud.'" 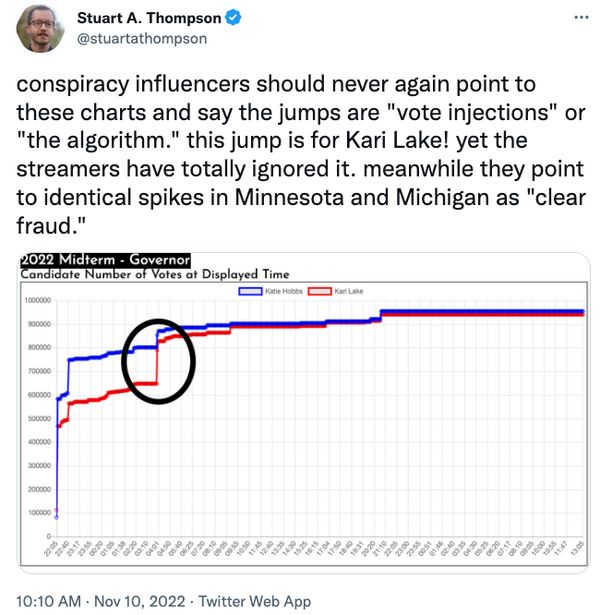 As was the case in 2020, these 2022 election claims weaponize well-understood voting phenomena as supposed evidence of fraud by asserting that "drops" of ballots are mysterious or unexplained. Because that is not the case, the claim is false.

"Rumors, Conspiracy Theories, and Unsubstantiated Claims About Voting: What to Expect on and After Election Day 2022." Election Integrity Partnership, https://www.eipartnership.net/blog/what-to-expect-2022-midterm-election-rumors-narratives. Accessed 10 Nov. 2022.

"Two Democracies Are Forming in the U.S. — ZIP Code Determines Which One You're In." Los Angeles Times, 19 Oct. 2022, https://www.latimes.com/politics/story/2022-10-19/mail-ballot-election-laws-backlash-voting-rights-midterms.

Previous Article
Next Article
Article 2 of 13 in Collection