No, This Isn't a Real Photo of Balenciaga Stylist Lotta Volkova

Many accused Balenciaga of condoning child sexual exploitation after controversial campaigns in late 2022. 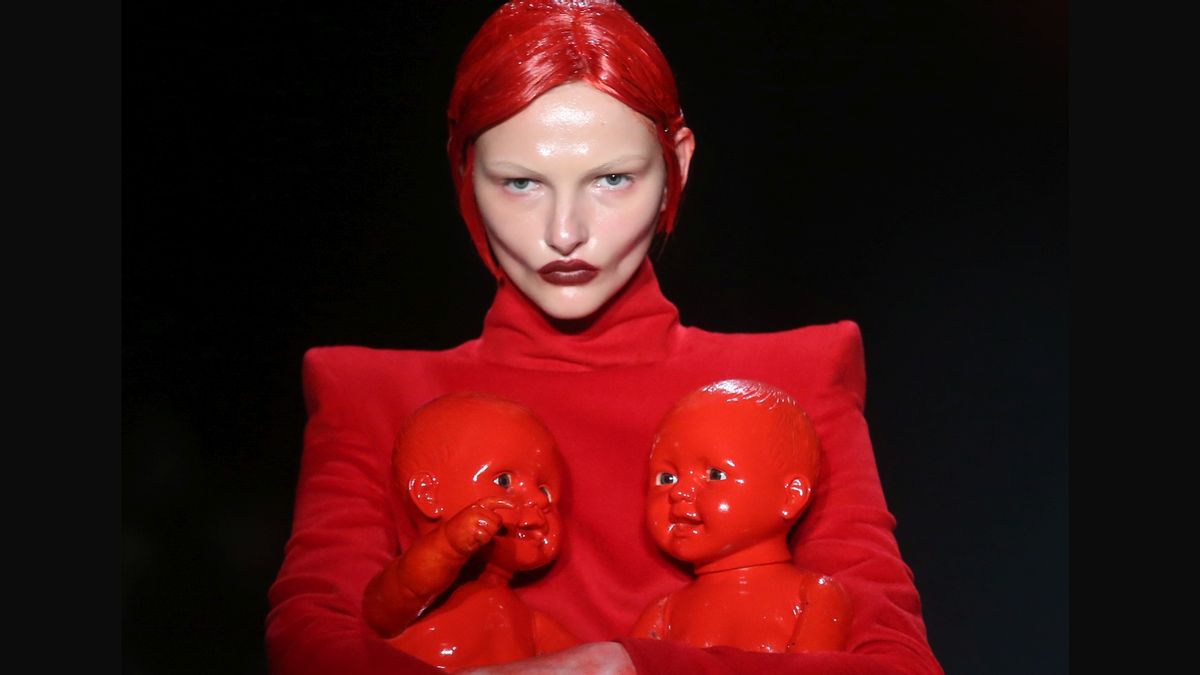 Fashion label Balenciaga was under fire for controversial November 2022 campaigns, in which many accused the brand of condoning child sexual exploitation. One series of photographs from the campaign showed children posing with handbags shaped like teddy bears in bondage gear. Another photograph from a different campaign with the brand featured printed material that discussed child pornography laws.

Weeks of controversy resulted in outraged internet users trying to pinpoint the alleged culprits behind the campaigns. One Twitter user claimed that a photograph of an individual in what appeared to be a red suit, clutching two baby dolls drenched in blood-colored red paint was actually Lotta Volkova, "chief designer" for Balenciaga. The tweet claimed that Balenciaga "knew exactly what they were doing" when they photographed and released the controversial campaigns.

However, this picture did not feature Lotta Volkova. According to Getty Images, this is a 2016 photograph of an unnamed runway model showcasing designs from Chinese designer and performance artist Sheguang Hu's collection during the Mercedes-Benz China Fashion Week.

Elsewhere, one can find actual photographs of Lotta Volkova, a stylist who has worked with the Paris-based Vetements collective and has consulted for Balenciaga, Jean Paul Gaultier, and others. Her work has been described as aiming for "shock, awe and eccentricity," and her looks on the runway as "part choir boy, part Lolita." Volkova also has walked runways in the past, as evidenced by these photographs of her modeling for Vetements, but the model pictured above for this story is not Volkova.

Many accused Volkova of being behind the controversial Balenciaga campaigns, and nicknamed her a "Satanic stylist" for her Instagram content, which reportedly included scenes of violence and Satanic imagery. Her Instagram was made private as the accusations spread.

But a spokesperson for Volkova told Newsweek that "she condemns the abuse of children in any form," and added that she "has not worked with Balenciaga or its team since 2017, and she has in no way participated in the brand's recent Instagram or advertising campaigns."

Given that the picture above featured a model who is not Volkova, and Volkova herself denied being involved in the Balenciaga campaigns, we rate this claim as "Miscaptioned."

In another visual hoax circulating contemporaneously with the supposed Volkova photo, a well-traveled picture of a "human skin jacket" (actually made of latex and silicone) was overlaid with a Balenciaga logo to create the false impression that the company had made the product.