Is This a Real Backdrop of a Boris Johnson Interview?

Letters arranged on a school wall appeared to insult the U.K. prime minister during a televised appearance in August 2020. 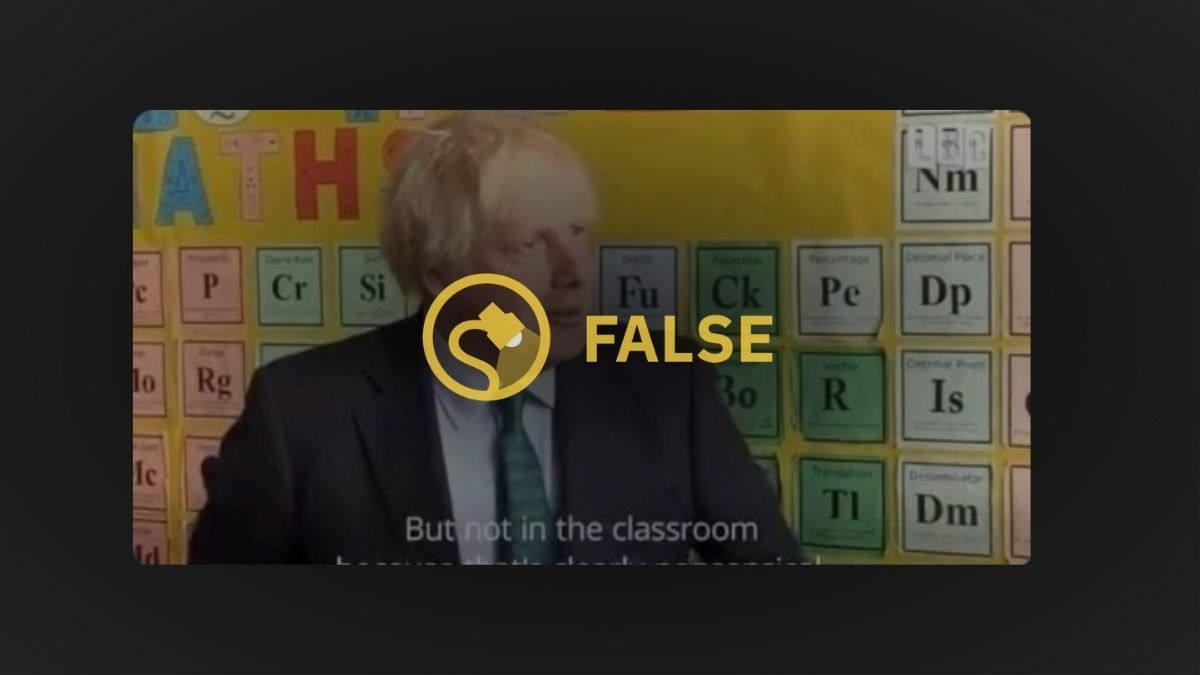 Claim:
The backdrop to an interview with U.K. Prime Minister Boris Johnson in August 2020 showed a "Periodic Table of Maths," the letters of which were arranged to spell out “Fuck Boris.”
Rating:

Eagle-eyed viewers thought they spotted an insult to U.K. Prime Minister Boris Johnson in the background of an interview from August 2020, as screenshots of his televised appearance at a Leicestershire school spread across the internet. Johnson visited the school and spoke to news media about changes to face mask guidelines in schools around the country as a result of the coronavirus pandemic.

In September 2020, images of the interview went viral, and appeared to show an arrangement of letters on a school wall behind Johnson as he spoke to cameras. The letters, visible above his left shoulder under the "Periodic Table of Maths," spelled out the words, “Fuck Boris.” Snopes readers asked us if the image was photoshopped. We learned that it was. To determine this, we found the original interview from numerous media outlets, and compared the visible backgrounds to the above image.

From this angle, “Si,” “Ta,” “r,” and “Se” were visible above Johnson’s shoulder. None of these angles showed any letters that spelled out “Fuck Boris.”

But internet users still found things to poke fun at in the unedited video. Some users circled a section of the background that spelled out “arse” by removing the “T” in the “Ta” element:

During the interview, Johnson said that wearing face masks inside a classroom was “nonsensical,” and that in keeping with World Health Organization (WHO) guidelines, they should be worn in schools that were COVID-19 “hotspots,” but only in “confined areas outside the classroom,” like corridors. He added that teachers can’t teach with face coverings, and one couldn’t expect students to learn with their faces covered either.

(We should note that the same school Johnson visited in August had a staff member test positive for COVID-19 in early September).

Beginning on Sept. 1, 2020, the U.K. government mandated that face coverings be required in communal areas and corridors of secondary schools in parts of England that are under lockdown. Teachers in all other secondary schools could make the decision themselves on whether to enforce face masks.

Based on original footage from news outlets that confirmed the background was indeed photoshopped, we rate this claim as “False.”