Did 'Back to the Future II' Correctly Predict Cubs World Series Win in 2015?

The 1989 film 'Back to the Future II' did not correctly predict Chicago would be the winner of a 2015 Cubs-Marlins World Series match-up. 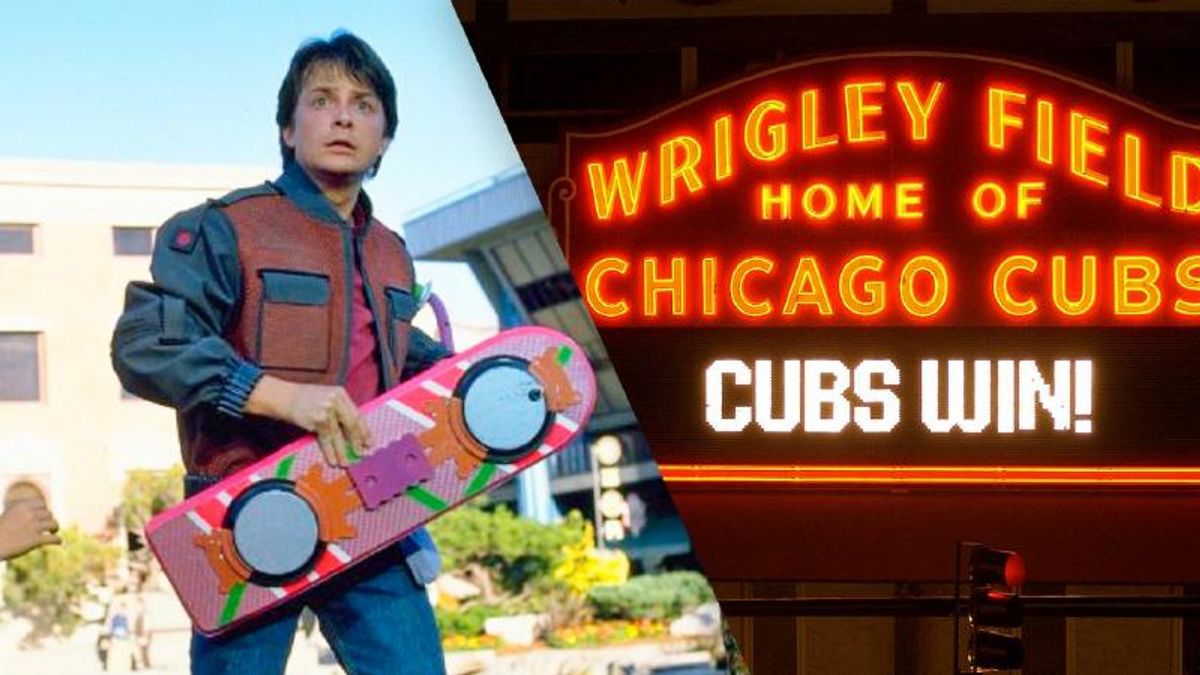 Claim:
The 1987 film Back to the Future II correctly predicted that the Florida Marlins would win the 1997 World Series and that the Cubs would play Florida in the 2015 World Series.
Rating:

As intriguing as it might be to believe so, the film Back to the Future Part 2, the 1989 sequel to the 1985's hit Back to the Future, made no prediction, correct or otherwise, about the results of the 1997 World Series. At the beginning of the film, time-travelling scientist Doc Brown takes Marty McFly forward in time to 21 October 2015 in an effort to alter the future and prevent Marty's (as yet unborn) children from ending up in prison. While in the future year 2015, Marty watches a holographic sports news broadcast announcing that the Chicago Cubs have swept an unnamed Miami team (represented by a gator, not a marlin) to win the World Series. This broadcast inspires Marty to buy a sports almanac and take it back to the past with him so that he can make accurate bets on future sporting events, but the contents of the almanac are not revealed in the film.

This rumor began to spread on the Internet in October 1997, immediately after the Florida Marlins (who are based in Miami) defeated the Cleveland Indians to win World Series, either started as a joke or spread by someone who inaccurately remembered the news broadcast scene described above. One version of the rumor has the character Biff, who ultimately ends up with the almanac, commenting on the 1997 entry (as described in the example above), but he actually makes no such statement in the film. In fact, it would make little sense for him to utter such a comment, since it is the 1955 Biff who looks through the almanac to use in placing bets. He'd be unlikely to look at the results of a World Series that would not take place for 42 years and utter, "Yeah, right," as if the outcome described were improbable. (Nor would Marty be likely to see a billboard describing the results of the 1997 World Series in the year 2015.)

[T]he 1989 movie "Back to the Future Part II" predicted the Cubs would win the 2015 World Series, and the man who wrote the screenplay and imagined this unlikely scenario is Bob Gale, a lifelong St. Louis Cardinals fan. In a sport where players and fans believe in curses, jinxes and superstitions, maybe it's not so crazy to think a movie has somehow spurred the Cubs to the brink of history.

"Back to the Future" screenwriter Bob Gale predicted the Cubs would win the 2015 World Series but is a lifelong Cardinals fan. Gale said the prediction grew out of the plotline in which primary character Marty McFly, famously played by Michael J. Fox, gets the idea from another character of going back in time to make money on sports betting.

"What better way to give him the idea than with a really outrageous scenario, which is the Cubs win the World Series?" Gale said. "It's a double joke because they win the World Series against Miami — which [didn't have] major league baseball in 1989."

Predicting in 1989 (which is when the film was actually released, not 1987 as claimed) that Miami would have a major league baseball team in 2015 wasn't much of a stretch, as they were one of the largest metropolitan areas in the USA without a baseball team in 1989, and they were indeed awarded an expansion franchise just two years later.

With the Cubs approaching within a game of capturing the 2003 National League pennant in a series against the Florida Marlins, this rumor surfaced again, updated with the claim that Back to the Future II somehow predicted a Cubs victory over Florida in 2003. The film makes no reference to the year 2003 whatsoever, and the only information presented about a Cubs series victory applies to the year 2015.

This latter form of the rumor resurfaced in October 2015, when the Cubs reached the National League Championship Series (NLCS), and again in October 2016, when the Cubs finally reached the World Series for the first time in 71 years (against the Cleveland Indians). The 2016 version had no relevance, but the former iteration was quite intriguing, as Back to the Future II is set in 2015 and includes a scene in which Marty McFly views a holographic news broadcast announcing that the Cubs have defeated Miami to win that year's World Series:

But in real life the Cubs weren't pennant winners in 2015 (they lost the NLDS to the New York Mets), and even they had reached the World Series that year, they wouldn't have been matched up against a Florida team in the Fall Classic (since the Marlins and Cubs are both National League teams, and the Tampa Bay Rays weren't in the playoffs).

In 2004, on the day before what was to be the final game of that year's World Series, an updating of the rumor predicting Boston's winning the title in four games over St. Louis was circulated. (The rumor wasn't that much of a stretch, given that at the time they were leading the series three games to none.) Supposedly in Back to the Future II, Biff reads this startling news in the sports almanac he poaches from Marty and uses to make himself wealthy. Other versions of the rumor didn't specify the number of games, they just posited the Red Sox triumphing over the Cardinals.