Does Photo Show Baby Feeding from Goat's Udders in 1927?

In the black-and-white picture, a mother sits on the floor inside a house while holding a baby to feed from the animal. 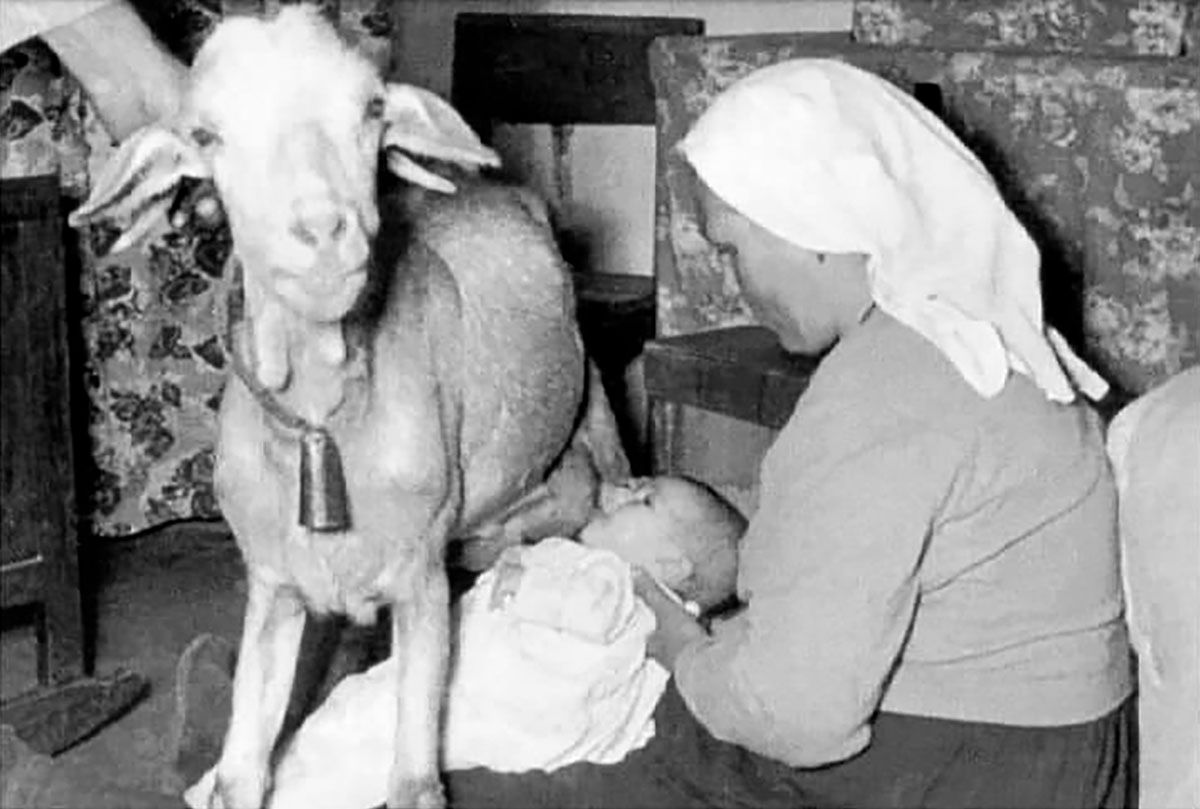 A picture posted to Reddit purportedly showed a mother helping a baby feed from a goat's udders in 1927 in what was described as rural homestead life. (Image Via Quesería El Faro)

Claim:
A picture of a baby feeding from goat udders shows rural homestead life in 1927.
Rating:

The picture is real. Also, the Reddit caption about goats filling in as wet nurses in previous centuries had some truth. But the picture was shot in 1958, not 1927.

On Feb. 16, 2022, a new Reddit post was created in the r/interestingasfuck subreddit. It showed a picture of a mother sitting on the floor inside a house while holding a human baby as it sucked milk from a goat's udders. The caption read: "Rural homestead life in 1927. When a woman wasn't able to breastfeed or died in childbirth when a wet nurse was not available a goat nurse maid was brought in to save the starving infant's life." The Reddit post quickly took off and received well over 50,000 points. For any readers unfamiliar with Reddit, this meant that it was one of the most popular posts of the day on the entire website.

We tracked down the origins of the photograph. According to the blog for the Spanish cheesemaker Quesería El Faro, it was taken on Feb. 14, 1958, in El Mojón, 31 years after the Reddit post claimed it was shot. El Mojón is a town in Teguise on the island of Lanzarote in the Canary Islands. The caption read: "Goat suckling a child in 1958, El Mojon, Teguise, Lanzarote." The website also included the names of the mother and child:

This mythical photograph has been present in many hotel businesses on the island for decades. In it, Segunda Pérez Concepción is portrayed nursing Eduardo, the youngest of her 4 children and the only one who was fed by the goat, and whom we have the honor of knowing, so with more affection we tell the fabulous story of his portrait of childhood.

The picture is framed on the wall of the cheese shop and showed what looked to be a crib on the left side. One version of the photograph showed a hand petting the goat as the mother held the feeding baby. The other one from r/interestingasfuck did not show the hand. This may have been because more than one picture was taken, or that the photograph had been doctored to remove the hand.

So the picture of the mother holding the feeding infant under the goat was real. Also, it was true that there was a history of goats feeding babies and serving as wet nurses in previous centuries, as the Reddit caption sort of hinted at.

In Wayland D. Hand's 1976 book, "American Folk Medicine: A Symposium," the author wrote that goats had been used as wet nurses around the world:

The goat, one of the earliest domesticated animals, served frequently as wet nurse to gods and heroes. Zeus and his offspring Dionysus, Asklepios, the god of medicine, and Aegisthus, slayer of Agamemnon, are only a few of these. The goat symbolized copious endowment with the good things of life, and Zeus rewarded the nymphs who took care of him with one of the horns of Amalthea, the goat that nourished him. This is the cornu copeia, "horn of plenty." The Bedouins of Israel still retort to the use of goat or sheep when a human wet nurse is needed but not available, and the goat tribe Anazeh derives its name from the fact that its progenitor was reared on goat's milk. The Hebrew Talmud ascribes strength, endurance, and pluck to the goat and believes milk fresh from the goat's udder relieves heart pains and milk from a white goat possesses special curative properties. Goats as wet nurses have been observed worldwide. One observer saw how devoted such a goat became to a Basuto child; another described how Hottentots tied their nurslings under the goats' bellies so that they could feed there.

Because milk does not keep well once it is separated from the animal and because the act of suckling was believed to aid digestion in infancy, medical writers beginning in the eighteenth century began to advocate nursing children directly at the udders of goats. Goats were easier to obtain and cheaper than human wet nurses; they were safer from disease and were better in many other respects. Although cows' milk was almost exclusively used in early American infant feeding, William Potts Dewees, who wrote the first American pediatric treatise in 1825, called attention to animal milks and pointed out that the English praised asses' milk; nevertheless, he preferred milk of goats. He then compared the chemical constituents of milk from cows, women, goats, asses, sheep, and mares. In 1816, Conrad A. Zwierlein, after listening to women at a fashionable European resort deploring their difficulties with wet nurses, wrote a book called, "The Goat as the Best and Most Agreeable Wet Nurse," which he dedicated to vain and coquettish women, as well as to sick, tender, and weak ones. Goat feeding then became very popular for a while until it was attacked on various grounds and fell into disfavor. In 1879, it was revived in the children's hospitals of Paris, especially for syphilitic infants.

It's unclear how common the practice of using goats as wet nurses may have been in 1927 (the year mentioned in the Reddit post) or at any time in the early 20th century.

In sum, the picture of the mother letting the baby feed from the goat udders was real. It was captured on the island of Lanzarote in 1958, not 1927.