Although the cosmetics giant has committed to supporting anti-domestic violence initiatives in the past, a viral TikTok made misleading claims. 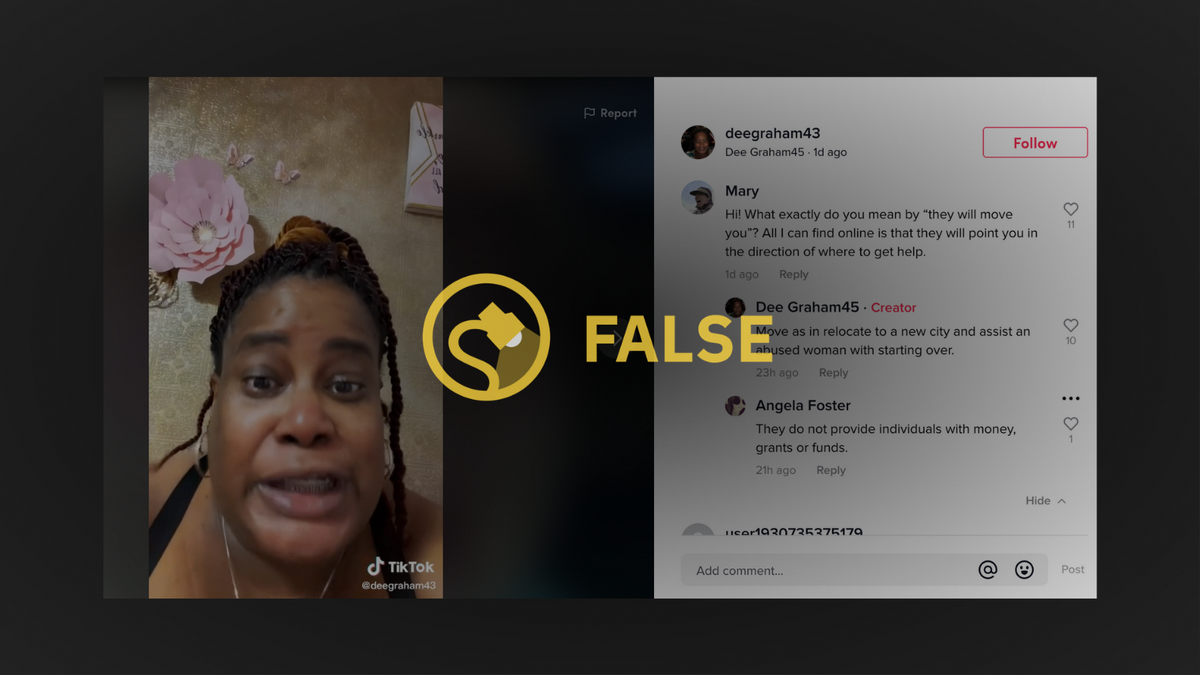 Claim:
If domestic violence survivors reach out to their local Avon cosmetics representative, the company will help them relocate, free of charge.
Rating:

Survivors of domestic violence in the United States should avoid relying on the information presented in the following video. If you need help, call the National Domestic Violence Hotline at 1.800.799.SAFE (7233). There are also state-specific resources available here.

A viral TikTok video with more than a million views and thousands of shares across social media platforms made misleading claims about resources for survivors of domestic violence and the cosmetics company Avon.

(Warning: The following video shows a purported survivor of domestic violence with injuries on her face.)

The video, which went viral in March 2021, begins with a short clip of a crying woman who appears to have facial injuries saying, “I never thought at 30 years old, I would be in a position to feel ashamed.” The video then cuts to a different woman who appears to be TikTok user deegraham43 saying, “You don’t have anything to be ashamed of.”

We do not yet know the source of the first video clip nor the status of the woman shown in it.

Deegraham43 continued in the now-private video, saying that she was a military wife who had been an Avon sales representative on military bases and had done Avon sales for decades. She said: “Go to your nearest Avon representative and let her see your face. Avon will relocate you anywhere. All they ask is that you remain safe. Just go to an Avon rep, they may not know, just tell them to tell their district manager, they will move you.”

The same video was shared on Twitter thousands of times.

Deegraham43 followed up with more videos making the same claim, even as many TikTok users posted comment replies doubting their veracity. Others in the comments section, including deegraham43 herself, shared links from Avon's website to profiles of sales representatives who they claimed were providing such relocation services.

We should note that Avon sales representatives are independent contractors who earn commissions selling Avon products. To become a sales representative they simply have to sign up on Avon’s website, and they can earn bonuses among other perks from the cosmetics company.

We decided to contact some of those representatives and received vastly different accounts of what could have been going on. One respondent, based in Kansas, claimed that she signed up to be a sales representative only one day ago because she saw that Avon supported domestic violence survivors on their website. When we asked where on the website she saw this, she said she did not remember. We asked her if she had received any training or information from Avon to help relocate survivors and she said she had not yet.

We had previously looked through Avon’s website and aside from their previous pledges of financial support to organizations that specialize in helping survivors of domestic violence, we found no evidence that they were training sales representatives to relocate domestic violence survivors.

Snopes also called a Georgia-based representative — whose name deegraham43 mentioned in the comments below the video — who was not aware of the information in the TikTok video. She said supporting domestic violence survivors was something she did independently and not as an Avon salesperson.

Finally, we called a sales representative -- who was not mentioned in the TikTok comments -- by choosing one at random in the New York area. This representative asked Snopes if we were in need of a domestic violence hotline number and added that at some point she had been given a number to pass along by someone at Avon, but she had to look for it and was not trained to provide any help to survivors. She then said the number she was given might have been for the National Domestic Violence Hotline.

We reached out to Avon’s media teams in both the United Kingdom and the United States. An Avon spokesperson in the U.S. sent us the following comment:

Avon has been empowering women for 135 years and we are proud to support many causes that have women and their families at the heart. While Avon has supported domestic violence organizations in the past, we do not directly provide services for domestic abuse survivors. The information in the recent social media video is false and we are sorry for the confusion. Avon Representatives are independent business owners and not employees of Avon. Their private actions and social media posts are not reviewed or condoned by Avon. We encourage anyone who needs help to contact the National Domestic Violence Hotline. Visit https://www.thehotline.org/ or call 1.800.799.SAFE.

We messaged deegraham43 on TikTok to learn more about why she is sharing this information, and we will update this post if we receive a response.

Given that no Avon sales representative we spoke to was able to verify that relocating survivors was something they did as a part of their business with Avon, and that Avon itself said the information in the Tiktok video is false, we rate this claim as "False.”