Do statistics demonstrate that crime rates in Australia have increased substantially since the government instituted a gun buy-back program in 1997? 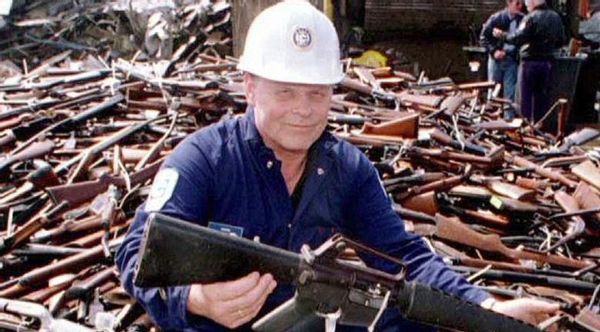 Claim:
Statistics demonstrate that crime rates in Australia have increased substantially since the government there instituted a gun buy-back program in 1997.
Rating:

During the 1990s, Australia was confronting a problem similar to the one that regularly confronts Americans: shooting incidents over the previous decade had left more than a hundred people dead, including the infamous Port Arthur massacre in April 1996 that saw one gunman wielding a semi-automatic rifle kill 35 people over the course of a single day (including 20 people with 29 bullets in about 90 seconds):

In 1996, Martin Bryant entered a café at the site of a historic penal colony at Port Arthur, Tasmania.

The 28-year-old ate lunch before pulling a semi-automatic rifle from his bag and embarking on a killing spree. By the time he was apprehended the next morning, 35 people were dead and 23 had been wounded. Bryant had become the worst mass-murderer in Australia's history.

Australia had experienced mass shootings before, but the Port Arthur massacre shook the nation to its core. Bryant was later assessed to have the IQ of an 11-year-old. He told investigators that he'd paid cash for firearms at a local gun dealer.

Shortly afterwards, John Howard, the new Australian prime minister, moved to enact nationwide gun law reform (a process complicated by the fact that the Australian national government had no control over gun ownership or use, so gun reform legislation had to be passed individually by all states and territories). Those reform efforts, known as the 1996 National Firearms Agreement (NFA), included two nationwide gun buybacks, voluntary surrenders, state gun amnesties, a ban on the importation of new automatic and semiautomatic weapons, the tightening of gun owner licensing, and the creation of uniform national standards for gun registration. Australia collected and destroyed an estimated 650,000 firearms (a reduction equivalent to the removal of about forty million guns from the United States), which reduced Australia’s firearms stock by around one-fifth.

Around 2001, a piece appeared on the Internet that has been circulated widely and often ever since, attempting to make the case that Australia's gun reform efforts were a dismal failure in terms of reducing violent crime:

From: Ed Chenel, a police officer in Australia.

I thought you all would like to see the real figures from Down Under.

It has now been 12 months since gun owners in Australia were forced by a new law to surrender 640,381 personal firearms to be destroyed by our own government, a program costing Australia taxpayers more than $500 million dollars.

While figures over the previous 25 years showed a steady decrease in armed robbery with firearms, this has changed drastically upward in the past 12 months, since the criminals now are guaranteed that their prey is unarmed.

There has also been a dramatic increase in break-ins and assaults of the elderly. Australian politicians are at a loss to explain how public safety has decreased, after such monumental effort and expense was expended in "successfully ridding Australian society of guns."

You won't see this data on the American evening news or hear your governor or members of the state Assembly disseminating this information.

The Australian experience proves it. Guns in the hands of honest citizens save lives and property and, yes, gun-control laws affect only the law-abiding citizens.

Take note Americans, before it's too late!

The conclusions drawn in this piece were both premature and inaccurate, however. In a peer-reviewed paper published by American Law and Economics Review in 2012, researchers Andrew Leigh of Australian National University and Christine Neill of Wilfrid Laurier University found that in the decade following the NFA, firearm homicides (both suicides and intentional killings) in Australia had dropped significantly:

In 1997, Australia implemented a gun buyback program that reduced the stock of firearms by around one-fifth (and nearly halved the number of gun-owning households). Using differences across states, we test[ed] whether the reduction in firearms availability affected homicide and suicide rates. We find that the buyback led to a drop in the firearm suicide rates of almost 80%, with no significant effect on non-firearm death rates. The effect on firearm homicides is of similar magnitude but is less precise [somewhere between 35% and 50%].

Similarly, Dr. David Hemenway and Mary Vriniotis of the Harvard Injury Control Research Center found in 2011 that the NFA had been "incredibly successful in terms of lives saved":

For Australia, the NFA seems to have been incredibly successful in terms of lives saved. While 13 gun massacres (the killing of 4 or more people at one time) occurred in Australia in the 18 years before the NFA, resulting in more than one hundred deaths, in the 14 following years (and up to the present), there were no gun massacres.

While there is no doubt that firearms deaths in Australia have decreased substantially in the years since the implementation of the NFA, how much of that decrease is directly attributable to the NFA is still subject to debate. Much of that debate focuses on the fact that the gun death rate in Australia was already decreasing prior to the time the NFA was introduced:

For Australia, a difficulty with determining the effect of the law was that gun deaths were falling in the early 1990s. No study has explained why gun deaths were falling, or why they might be expected to continue to fall. Yet most studies generally assumed that they would have continued to drop without the NFA. Many studies still found strong evidence for a beneficial effect of the law.

It's also true that in both cases, the authors of studies cautioned that NFA-like plans wouldn't necessarily achieve (and have not achieved) the same results in the United States, in large part because Australia's geography makes it much easier to control the flow of arms into the country:

Several factors are important in assessing the extent to which the results from the Australian buyback can be extrapolated to other countries. Australian borders are more easily controlled than in countries that have land borders. In addition, Australia’s government in general and its policing and customs services in particular are highly organized and effective. The NFA also had an extremely high degree of political support and was quite competently executed. And the buyback was accompanied by a uniform national system for licensing and registration of firearms. These factors should be borne in mind in considering the extent to which the results from the Australian NFA might generalize to other countries.

It does not appear that the Australian experience with gun buybacks is fully replicable in the United States. Levitt provides three reasons why gun buybacks in the United States have apparently been ineffective: (a) the buybacks are relatively small in scale (b) guns are surrendered voluntarily, and so are not like the ones used in crime; and (c) replacement guns are easy to obtain. These factors did not apply to the Australian buyback, which was large, compulsory, and the guns on this island nation could not easily be replaced. For example, compared to the buyback of 650,000 firearms, annual imports after the law averaged only 30,000 per year, with many of these bought by law enforcement agencies.

Regardless of how much of a cause-and-effect relationship there might be between the NFA and gun deaths in Australia, it's undeniable that the firearms homicide rate in that country has decreased substantially since the implementation of the NFA. It's not the case, however, as suggested by the misleading and long out-of-date online piece quoted in the Example block above (which was written way back in 2001) that the overall crime rate in Australia has shot up since the NFA was introduced. The rates of various types of violent crimes (sexual assault, kidnapping, homicides of all types) have scarcely changed at all, and while the robbery rate rose substantially in the 1998-2001 timeframe, it dropped below its pre-NFA level by 2004 and has continually declined since then: