Did the Attorney General of Alabama Once Tell the Ku Klux Klan to 'Kiss My Ass'?

Bill Baxley wrote the famously succinct letter to a KKK Grand Dragon in 1976 in response to threats intended to intimidate him. 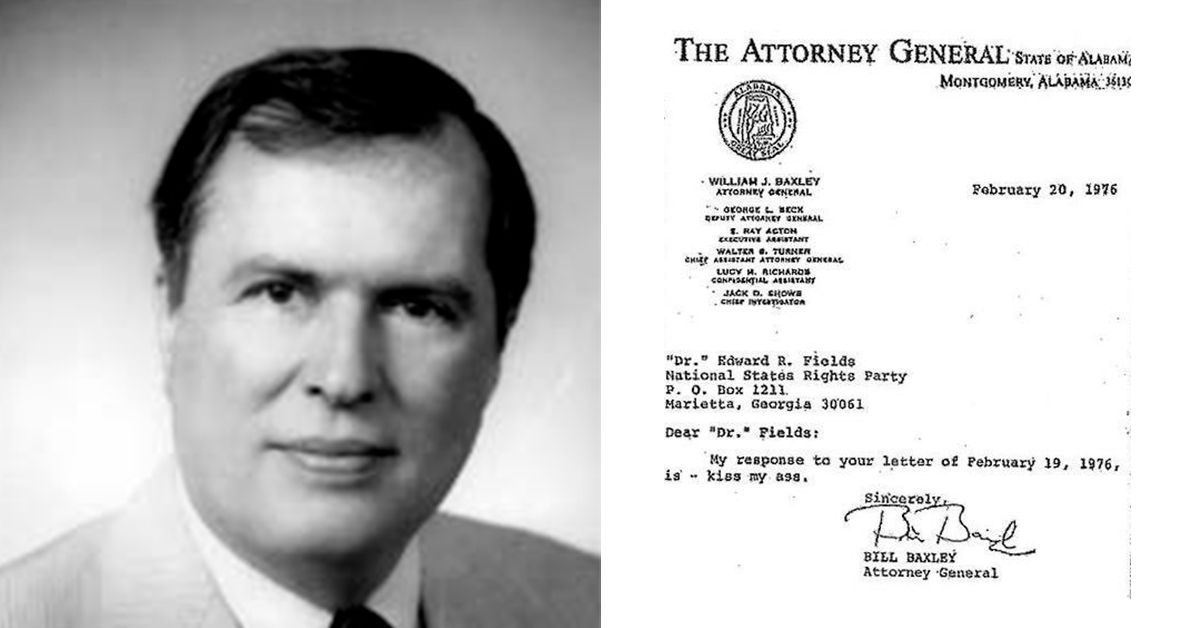 Eight years after Klansmen bombed the 16th Street Baptist Church and killed four African-American children in 1963, Bill Baxely became the attorney general of Alabama. One of the first thing he did upon taking office was write down four names on a piece of paper: Addie Mae Collins; Carole Robertson; Cynthia Wesley; and Denise McNair — the victims of the attack.

The case had been left unsolved, and Baxley was determined to change that. "I’m just thankful that I was fortunate enough to be in a position where I had the power to do something about it when the opportunity came up," he told us. And he did. In 1977, Baxley convicted the bombing ringleader, Robert Chambliss, of first degree murder. Chambliss died in prison in 1985.

But that wasn't the way the Klan thought the story would play out. When Baxley took office at the age of 29, the stage seemed set to let Chambliss and his accomplices walk free. Instead, Baxley reopened the case and began turning the heat up. As a result, words of hate and threats of retaliation poured in. Baxley told us:

I got a stack of threats from all over the country. There were more of them from outside the South than from the South — by a goodly number too.

One of those threats came by way of a letter written on 19 February 1976 by Ku Klux Klan Grand Dragon Edward R. Fields. In the letter, Fields demanded a reply — so Baxley gave him one. On official Alabama Office of the Attorney General letterhead, Baxley wrote a one-sentence response that would become legendary. It simply said:

If Baxley had it his way, his letter never would have seen the light of day. It was the Klan that made it public. Baxley told us:

I was afraid my mama would be angry at me for using bad language. The way it got out in public was the Klan themselves put it out and they thought it would hurt me. They put it in all their publications to show what an awful guy I was.

As it turned out, his mother wasn't upset, and Baxley's letter had the opposite effect. In recent years it has gone viral, and his words and actions standing up to the notorious hate group have been viewed as heroic. It was published in the 2014 book Letters of Note and featured in an NPR episode that year (host Audie Cornish tried to get Baxley to read the letter, but he refused, still embarrassed by the coarse language).

The letter became popular once again in mid-August 2017, after a deadly white supremacist rally in Charlottesville, Virginia, took three lives. In response, President Donald Trump has repeatedly been hesitant to condemn the hate groups that caused the violence, tacking blame on "both sides." Baxley's letter has been held up as an example of how to respond to perpetrators of racial hate:

Worried about telling off a white supremacist or neo-nazi?

During the weekend of violence in Charlottesville beginning on 11 August 2017, 32-year-old Charlottesville resident Heather Heyer was killed when a "Unite the Right" white supremacist rally attendee plowed his car into a crowd of counter-demonstrators. James Alex Fields, 20, has been charged with murder in the incident. Two Virginia State Police officers also died when the helicopter they were using to monitor the unrest crashed. Baxley told us:

There is a huge difference this time, because the people that are responsible now are not going to get away with it. All too often back in earlier days, they got away with it and they knew they could. We can’t allow that type of thing to take root ever again, and I don’t think it will.

Some would argue that is at least in part because Baxley's actions as Alabama's state attorney general set a new tone and sent a message: white supremacist violence would no longer be tolerated. But when he left office, Baxley knew some of the perpetrators continued to walk free. Again, however, his actions during Chambliss trial ensured that would not always be the case.

More than two decades later, a young U.S. Attorney by the name of Doug Jones resurrected the case, zeroing in on two more murder suspects. Baxley told us:

The people that came in behind me wouldn't touch the case with a 40-foot pole because they thought it was politically unpopular. But the silver lining is when I prosecuted that case, there was a kid in law school who cut classes and came in and watched that trial every day. Almost 25 years later he was the U.S. Attorney in Birmingham and he picked it back up. If I'd known there was this kid there that would one day be U.S. Attorney I wouldn't have had the pangs of anxiety I had over the years when I had to leave office and left those people walking around. This kid finished what I couldn’t finish — he prosecuted the other two.

Jones (now running for United States Senate) successfully prosecuted Klansmen Thomas Blanton and Bobby Frank Cherry, who were convicted in 2001 and 2002 respectively. Blanton was denied parole in 2016, and Cherry died in prison.

Baxley had some thoughts on current events, having lived and experienced the Civil Rights era firsthand. He told us:

We need to practice what so many good people have preached, and that’s tolerance and respect — but not tolerance for hatred.

Usher, Shaun.  Letters of Note: An Eclectic Collection of Correspondence Deserving of a Wider Audience.   6 May 2014.