Did Astronauts Remove Their Helmets on the 'Moon'? 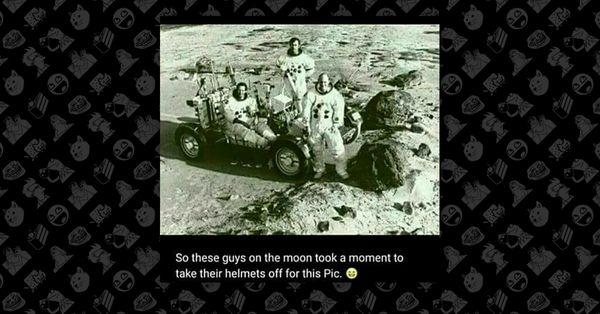 Claim:
A photograph showing a group of astronauts without their helmets on indicates that the moon landing was staged.
Rating:

Recently, a new piece of "evidence" supporting the ever-popular conspiracy theory that the moon landing was staged came to our attention:  a photograph purportedly showing a group of astronauts without their helmets on the surface of the "moon." This photograph is authentic, but was not taken on the surface of the moon. It wasn't until about two months later, on 21 April 1972, that these astronauts touched down on the surface of the moon. On that occasion, they wore their helmets: On April 16, 1972, the sixth manned lunar landing mission, Apollo 16, launched from Kennedy Space Center, Fla. on its way to conduct scientific investigations on the Moon’s Descartes highlands. The mission was also the first usage of the Moon as an astronomical observatory with the use of the ultraviolet camera/spectrograph which photographed ultraviolet light emitted by Earth and other celestial objects. In this photo taken by lunar module pilot Charles M. Duke, commander of the Apollo 16 lunar landing mission, John W. Young, salutes the United States flag during the mission’s first extravehicular activity. Both the Lunar Module (LM) “Orion” and the Lunar Roving Vehicle (LRV) can be seen in the background. NASA’s Marshall Space Flight Center in Huntsville, Ala. held overall responsibility for both the Saturn V launch vehicle and the LRV.