But that’s not to say that the moon hasn’t seen its fair share of asteroid impacts. 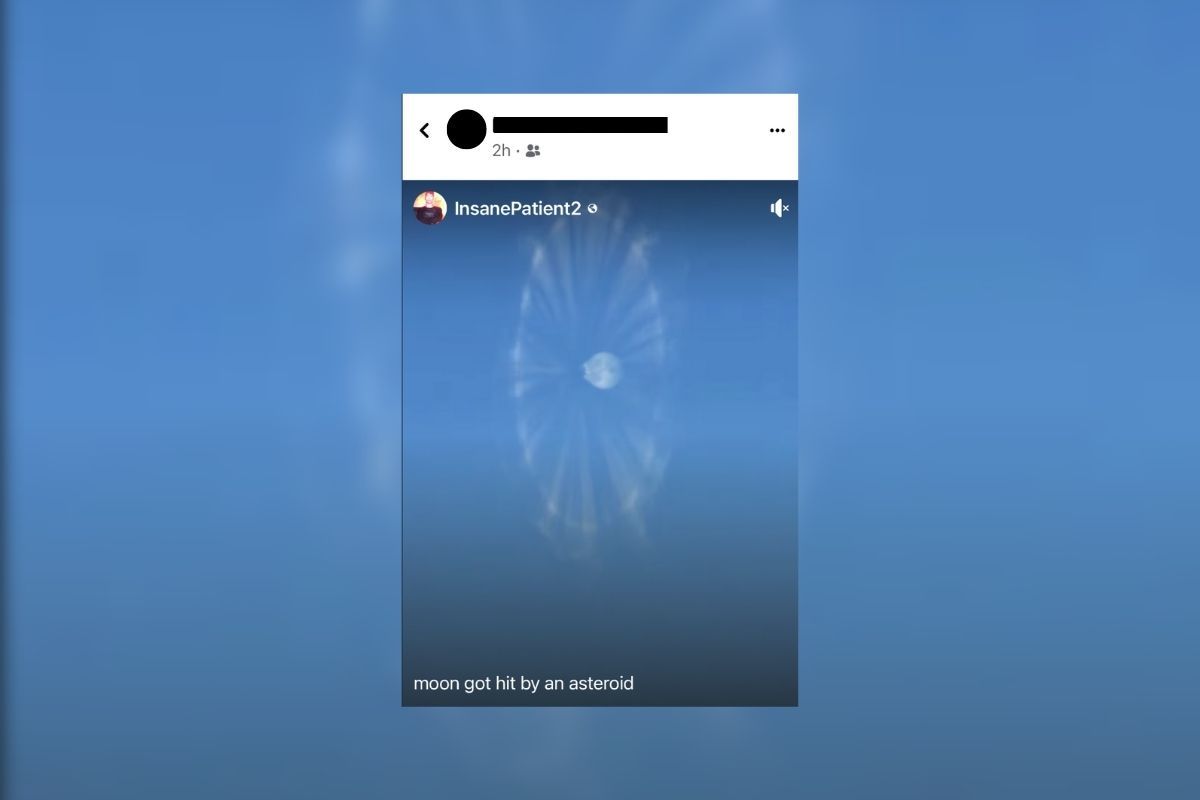 Claim:
A video authentically shows an asteroid colliding with the moon.
Rating:

A video shared widely on social media claims to show the dramatic moment an asteroid struck the moon — a dramatic display complete with massive debris cloud that was supposedly seen and recorded by humans on Earth.

Except the whole thing was fake.

The video, titled “moon got hit by an asteroid,” was published to Facebook on July 16, 2022, by the account InsanePatient2. As of this writing, it had been viewed more than 7.4 million times with over 121,000 likes.

In an email to Snopes, NASA confirmed that the video was fake and that no such collision had occurred.

In addition to this confirmation, our newsroom was clued into the falsity of the video given that it appeared to be an obvious work of CGI (computer generated imagery), and the fact that no other reputable publications had reported on the supposed incident.

“Space enthusiasts and other image processors are often excited about raw imagery downlinked from NASA spacecraft and other sources. Sometimes it is used and altered to create fan-made works shared online. This particular product is one of those examples,” added O’Neill.

“NASA has extensive image and video databases. Any official NASA news or imagery will be shared via an official agency communications channel. To search our primary imagery database, see here.”

For the record, asteroids are different than meteors. NASA explained that an asteroid is “a small rocky body that orbits the Sun.”

“Sometimes one asteroid can smash into another. This can cause small pieces of the asteroid to break off. Those pieces are called meteoroids. Meteoroids can also come from comets,” wrote the space agency.

That’s not to say that the moon hasn’t seen its fair share of collisions. One side of the moon is “littered” with craters, in what has led some scientists to nickname our lunar neighbor the “two-faced moon.” Brown University researchers in April determined that’s because an asteroid collided with the lunar surface some 4.3 billion years ago, contributing to volcanism that at the time helped to form and shape the moon as we know it today.

Throughout its 4.5-billion-year history, the moon has been, and continues to be, struck by celestial objects on the daily, reported Live Science. Each day, an estimated five-and-a-half cars worth of dust and about “100 ping-pong-ball-sized meteoroids” collide with the moon — roughly 33,000 meteoroids annually. Less frequently, large meteoroids strike the moon. Those estimated at 8 feet across collide with the satellite body every four years or so, hitting the moon with a force of 1,000 tons of TNT.

This is also not the first time that we’ve debunked rumors about objects striking the moon (such as a rocket rumored to hit the lunar surface in March 2022), or about the moon in general (such as a photo that purportedly showed the 1969 moon landing was fake).

For more moon-related Snopes content, check out the following articles: