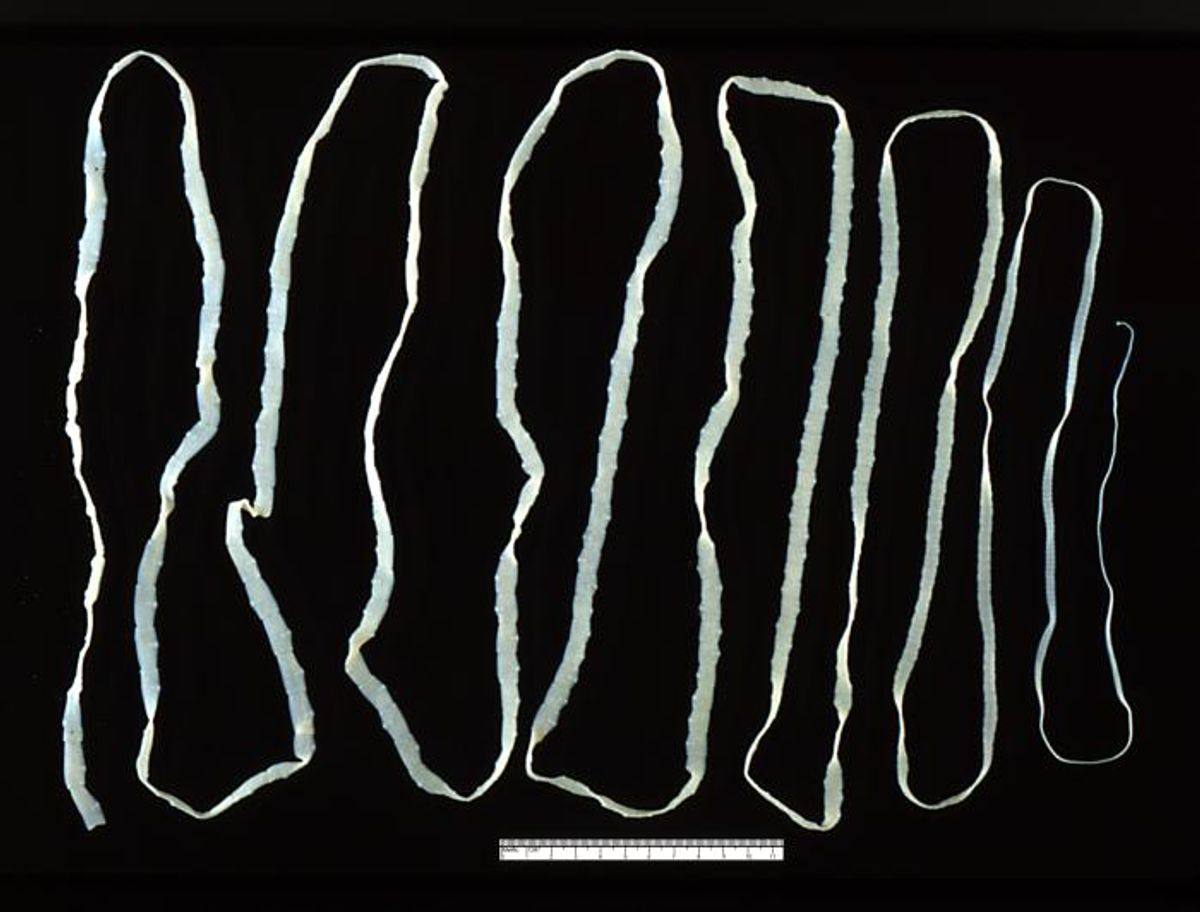 Image Via Wikimedia Commons/Centers for Disease Control and Prevention

In August 2014, an episode of Discovery Fit & Health's medical scare docudrama Untold Stories of the E.R. dramatized a supposed real-life scenario in which a teenage girl arrived at Florida hospital's emergency room with a bulging stomach, and the cause of the patient's malady was eventually revealed when she went to the bathroom and excreted tapeworms. The girl's mother then allegedly admitted that she had fed her daughter tapeworm egg pills to help the girl drop some weight before an upcoming beauty pageant: At some point, the patient went to the bathroom and started screaming.

"It was a toilet bowl full of tapeworms. Blegh!" [E.R. nurse, Maricar] Cabral-Osorio said. "It was so gross and she had pooped all these tapeworms. There were a couple that were very long and wiggling around trying to get out of the toilet bowl."

Trying to keep up the proper bedside manner, Cabral-Osorio told the patient that since the tapeworms were out of the body, she'd be just fine.

"We were wondering how did she get those tapeworms, and then you saw the mom turn white," Cabral-Osorio said. "The mom was apologizing to the girl. It's like 'I'm so sorry. You know, I did it just to make you a little skinnier. You needed some help before we went on to the pageant."

Cabral-Osorio said the mother denied giving her daughter tapeworms per se, but admitted giving the girl pills with tapeworm eggs.

This dramatization echoed a century-old rumor about women buying and ingesting diet pills made of tapeworm eggs in order to maintain slender figures, with the parasites taking up residence in the women's intestines and consuming a significant portion of their caloric intake, thereby preventing food from being stored as undesirable, poundage-adding fat and fostering the burning up of previously stored fat.

Whether such a method of weight loss was actually ever a common or widespread practice remains a subject of debate. Purported vintage advertisements for tapeworm-based diet pill products dating from the early 20th century are often cited as proof that it was, but whether such products actually matched their advertised descriptions would be difficult to verify at this remove. Just because an ad for a diet pill proclaimed the product contained tapeworm eggs doesn't mean it really did — duping people into buying medicinal nostrums by way of making false and exaggerated claims was standard procedure in the days before government regulation of food and drug products.

In the 1960s, memories of those ads resurfaced as appetite-suppressant candies came into vogue, prompting curious dieters to speculate on how they worked. By 1970, diet pills were all the rage, and amphetamines accounted for 8% of all prescriptions written that year. Simple reports about various wonder products evolved into appalling whispered-behind-hands tales about women so desperate to keep their figures that they routinely swallowed magic diet pills which were really tapeworms in capsules. Sometimes the tidbits ended there as "Did you know ...?" shared tales, but other times the buzz was expanded into tragic tales detailing the gruesome deaths that had befallen some beautiful but vain young things who were foolish enough to try such remedies.

This rumor has been associated with a number of prominent women, such as German model Claudia Schiffer, but probably no one was singled out by it more often than opera singer Maria Callas (1923-1977). Callas was indeed afflicted with tapeworms, but not due to any "lose weight quick!" reducing scheme: she was overly fond of steak and liver tartare, raw meat dishes prone to

contamination. In her case, the rumor about tapeworm diet pills collided with her real-life condition, resulting in her being misidentified as someone who used such a product. Compounding the error, respected newspapers passed along fatuous statements about her and this rumor as if they were revealed fact. (Example: "Maria Callas, whose desperation to lose weight led her to swallow a tapeworm, shed several stones over a matter of months and never regained her former power," trumpeted The Guardian in 1992.) Some poorly-researched biographies have even claimed this as truth, falling for the myth instead of the reality.

It's interesting to note many accounts of the Callas rumor spitefully and self-righteously conclude with the news that her indulgence in this ill-advised tapeworm diet fad caused her to lose the ability to hit the high notes. Such flourishes remind us that vanity rumors are often employed to humble women who aren't much liked or are seen as having attained high positions they did not merit. In Callas' case, her well-publicized, long-standing liaison with Aristotle Onassis caused some to belittle her talent by ascribing her success to her having a powerful benefactor; others wanted to find additional justification for disliking a woman who openly consorted with a (then) married man.

The tapeworm diet pill claims usually posited that partakers eventually swallowed deworming pills once they had achieved their desired figures to be rid of the tapeworms, but the rumor also melded with a folk tale to form a new entity:

A few years ago there was a company who put out sure-fire diet pills, guaranteed to lose weight in no time. People began to take these pills, and in no time the people were losing weight. After a few weeks these people began to lose too much weight. So the government investigated. They opened the pills and found the head of a tapeworm. Tapeworms are hard to get rid of. They had the person starve himself for days. Then they set a bowl of hot milk in front of the person. He had to keep his mouth open. After a while the tapeworm began to come up his throat 'cause he smelled the milk. They kept moving the bowl further away until the tapeworm was completely out.

Other versions of how to draw out a tapeworm include placing milk, cookies, and a hammer near the afflicted person's anus for a few nights and letting the tapeworm gorge himself into complacency on the treats. Once this has been accomplished, the cookie is withheld. When the worm comes all the way out to demand, "Where's my cookie?," whoever is stuck with worm-watching duty that night bashes it with the hammer. An alternative vermifuge calls for 29 steaks and a hammer: The patient eats a steak for 29 days in row, then fasts on the 30th day. The worm becomes closely acquainted with the hammer when it emerges to demand its T-bone.