Was 'The Sound of Silence' Inspired by Art Garfunkel's Blind Friend, Sandy Greenberg?

A Facebook post about the song's opening line "Hello darkness, my old friend?" went viral in the spring of 2022, capturing key elements of the men's lifelong friendship. 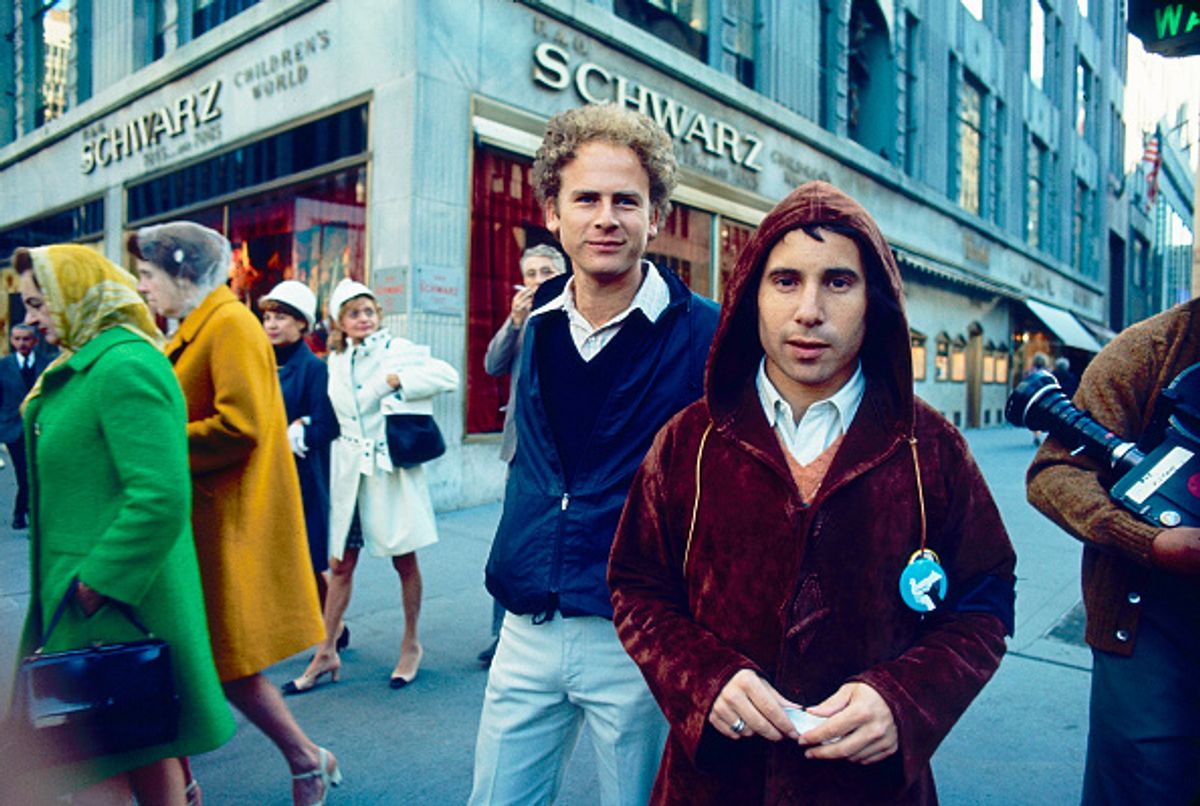 Claim:
A viral post accurately retells the story behind Simon & Garfunkel's opening lyric of "Hello darkness, my old friend" to the song, "The Sound of Silence."
Rating:

A viral social media post about Art Garfunkel's lifelong friendship with Sandy Greenberg was a generally accurate retelling of their history. They were college roommates, Garfunkel referred to himself as "darkness" when talking to Greenberg after Greenberg went blind, and Greenberg provided some initial money to help Garfunkel record an album. However ...

The song "The Sound of Silence" was written by Paul Simon, not Garfunkel. In 1984, Simon told "Playboy" magazine that the opening line of the song referred to his childhood practice of playing guitar in the dark. Greenberg also wasn't mentioned when Garfunkel wrote about the meaning of the song for the back cover of the album "Wednesday Morning, 3 A.M." Furthermore ...

On May 24, 2022, the Facebook page for the "Accidental Talmudist" posted a piece of text that supposedly relayed the story behind the opening line of the Simon & Garfunkel song, "The Sound of Silence." The viral post claimed the line, "Hello darkness, my old friend," had been inspired by Art Garfunkel's college roommate, Sandy Greenberg, who is blind.

This viral Facebook post (which is not the first to offer this version of the untold story behind "The Sound of Silence") gave a generally accurate overview of Garfunkel and Greenberg's friendship. The two were college roommates, Garfunkel nicknamed himself "darkness" when talking to Greenberg after Greenberg went blind, and Greenberg provided financial support to help launch Garfunkel's career. However, there area two important facts that the text did not consider: First, the song "The Sound of Silence" was written by Paul Simon, not Garfunkel. And second, while it was possible that Greenberg inspired the line, "Hello darkness, my old friend," no credible evidence proved that that was the case.

Sanford "Sandy" Greenberg is an author, inventor, philanthropist, and chair of the board of governors of the Johns Hopkins Wilmer Eye Institute. In 2020, he published a biography that borrowed its title, "Hello Darkness, My Old Friend," from the hit Simon & Garfunkel song, "The Sound of Silence."

It’s a bitterly cold February in 1961, and Sandy Greenberg lies in a hospital bed in Detroit, newly blind. A junior at Columbia University from a Jewish family that struggled to stay above the poverty line, Sandy had just started to see the world open up to him. Now, instead of his plans for a bright future — Harvard Law and politics — Sandy faces a new reality, one defined by a cane or companion dog, menial work, and a cautious path through life.

But that’s not how this story ends.

In the depth of his new darkness, Sandy faces a choice — play it “safe” by staying in his native Buffalo or return to Columbia to pursue his dreams. With the loving devotion of his girlfriend (and now wife) Sue and the selflessness of best friends Art Garfunkel and Jerry Speyer, Sandy endures unimaginable adversity while forging a life of exceptional achievement.

The bulk of the above-displayed Facebook post was cribbed from this biography and provided an accurate summary of Greenberg's relationship with Garfunkel. They were college roommates at Columbia University, Greenberg went blind about a year into their friendship, and Garfunkel — who started to refer to himself to his friend as "darkness" — encouraged Greenberg to continue his schooling.

In a 2020 People Magazine article about Greenberg's biography, Garfunkel talked about the pair's dynamic. The article read:

As [Greenberg] despaired in darkness at his parents’ house in Buffalo, N.Y., convinced he’d never make it through Columbia without sight, Garfunkel 'flew in, turned me around and said, ‘I will help you.’'

It 'was, for me, the beginning of the end of gray hopelessness,' writes Greenberg.

As Garfunkel devoted himself to being his friend's eyes, he would sometimes call himself Darkness. 'He divorced himself from the life he’d been living, altering his own ways to conform better to mine,' says Greenberg. 'Arthur would walk in and say, ‘Sanford, Darkness is going to read you The Iliad.’'

Garfunkel, joking that 'I'm a nutty guy,' remembers it as his way of staying close. 'I was saying, I want to be together where you are, in the black.'

As noted in the viral post, Garfunkel also once "abandoned" his friend at New York's Grand Central Terminal in an attempt to show Greenberg that he could make it home by himself despite his blindness. (Garfunkel didn't actually abandon his friend. He simply remained quiet and watched as his friend navigated the train system.) In 2016, the magazine for the duo's alma mater, Columbia Magazine, mentioned the incident in an article about the pair's friendship:

Then, one afternoon, Greenberg and Garfunkel went to Midtown. When it was time for Greenberg to go back to campus, Garfunkel said he had an appointment and couldn’t accompany him. Greenberg panicked. They argued, and Garfunkel walked off, leaving Greenberg alone in Grand Central Terminal. Greenberg, bewildered, stumbled through the rush-hour crowd. He took the shuttle to Times Square, transferred to the 1 train, and got out at 116th and Broadway. At the gates, someone bumped into him.

Greenberg knew the voice. It was Arthur. Greenberg’s first reaction was rage, but in the next second he realized what he had just accomplished — and realized, too, who had made it possible.

'It was one of the most brilliant strategies,' Greenberg says. 'Arthur, of course, had been with me the whole way.'

The viral Facebook post also claimed that Greenberg gave Garfunkel roughly $400 to help record Simon & Garfunkel's debut album. This, too, was accurate. In his biography, Greenberg recounted the moment when Garfunkel talked to him about the money, writing:

"You remember my high-school friend Paul, the guy who plays the guitar?" [Garfunkel said.] "We want to try our hand in the music business, but in order to do that, I have to have $400."

This was in 1964 — $400 was a lot o [sic] money then. In fact, Sue and my entire savings amounted to just over that amount, but I sent the money off to Arthur immediately. What else could I have possibly have done?

While the Facebook post truly recounted memorable moments from Garfunkel and Greenberg's lifelong friendship, its claim that Greenberg inspired the line, "Hello darkness, my old friend" was unfounded.

It was indeed possible, even plausible, that a song by a band with a member who called himself "darkness" and had a close friend who was blind would reference that relationship with the lyrics. However, as far as we could tell, neither Simon nor Garfunkel have ever said that was the case. In fact, both musicians have talked about the "The Sound of Silence," explaining the meaning of the song, without referencing Greenberg.

"The Sound of Silence" was written by Simon, not Garfunkel, circa 1963 and released on the band's debut album, "Wednesday Morning, 3 A.M." According to Simon, the opening line of the song referenced his childhood practice of playing guitar in the bathroom in the dark. Here's an excerpt from a 1984 interview Simon did with Playboy magazine:

SIMON: I used to go off in the bathroom, because the bathroom had tiles, so it was a slight echo chamber. I'd turn on the faucet so the water would run — I like that sound, it's very soothing to me — and I'd play. In the dark. "Hello darkness my old friend / I've come to talk with you again."

PLAYBOY: Is that where The Sounds of Silence came from?

SIMON: Well, that's the first line. Then it drifts into some other things. I've always believed that you need a truthful first line to kick you off into a song. You have to say something emotionally true before you can let your imagination wonder.

Garfunkel, too, has commented on the song. On the back cover of "Wednesday Morning, 3 A.M." the duo published a letter Garfunkel had written to Simon after the studio asked Garfunkel to write song descriptions for the album. The Sounds of Silence is a major work. We were looking for a song on a larger scale, but this was more than either of us expected. Paul had the theme and the melody set in November, but three months of frustrating attempts were necessary before the song “burst forth.” On February 19, 1964, the song practically wrote itself.

Its theme is man’s inability to communicate with man. The author sees the extent of communication as it is on only its most superficial and 'commercial' level (of which the 'neon sign' is representative). There is no serious understanding because there is no serious communication — 'people talking without speaking — hearing without listening.' No one dares take the risk of reaching out ('take my arms that I might reach you') to disturb the sound of silence. The poet’s attempts are equally futile ('… but my words like silent raindrops fell within the wells of silence'). The ending is an enigma. I find my own meaning in it, but like most good works, it is best interpreted by each person individually. The words tell us that when meaningful communication fails, the only sound is silence.

While the Facebook post was a generally accurate overview of Garfunkel and Greenberg's friendship — yes, they were college roommates, and Garfunkel indeed nicknamed himself "darkness" — there was no explicit evidence that the opening line of "The Sound of Silence" referenced their friendship.