Did the Army Football Team Kneel in Protest During the National Anthem? 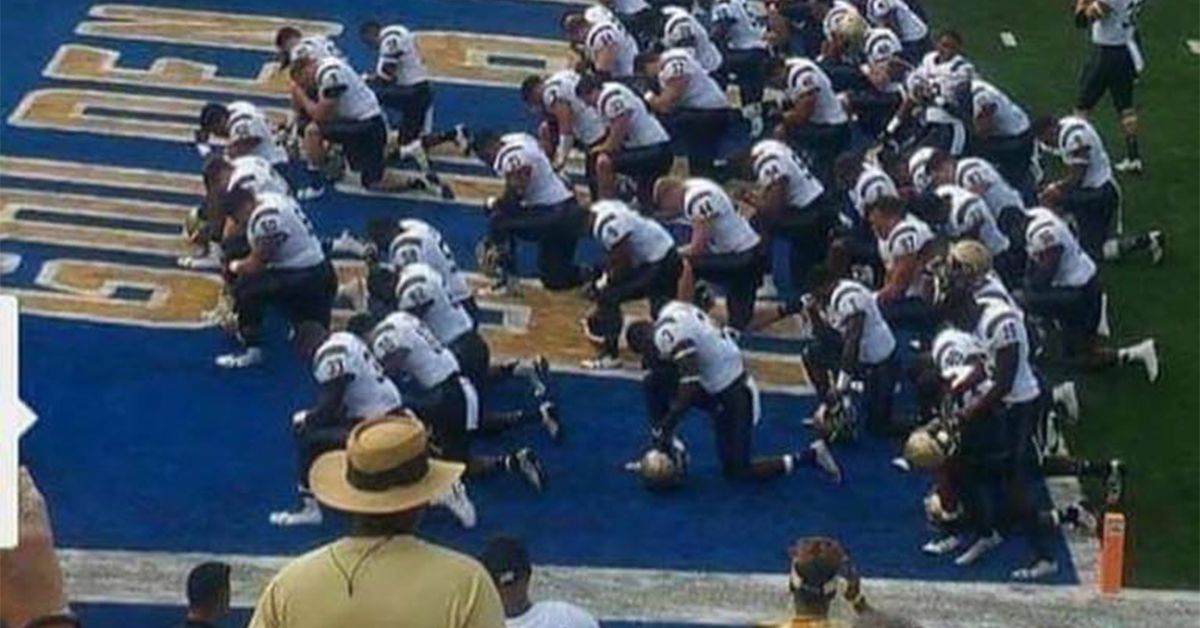 Claim:
A photograph shows the Army football team kneeling in protest during the national anthem.
Rating:

As an increasing number of football (and some baseball) players began kneeling in protest of police brutality during the national anthem in the fall of 2017, critics claimed that the protest was disrespectful to veterans. A popular photograph that purportedly showed the U.S. Military Academy team, the Army Black Knights, kneeling before a game appeared to throw a wrench into this line of argument: This photograph, however, actually shows the Navy Midshipmen kneeling in prayer before a game against the University of Tulsa. It has nothing to do with the "take a knee" protests.

The gold lettering in the end zone appears to spell out the word "Golden Hurricane," the name of the football team for the University of Tulsa. This is even more apparent when compared to a still shot of the university's field: We reached out to Tulsa University for more information about the photograph, and a Chris Maxon, director of the Golden Hurricane Club, told us by email that the team pictured was most likely the Navy Midshipmen, who played Tulsa on 30 September 2017. Maxon said:

This appears to be the Navy football team prior to the game against Tulsa last Saturday. This did not take place during the national anthem.

Scott Strasemeier, a senior associate athletic director for sports information at Navy Sports, confirmed that the picture shows members of the Navy football team kneeling in prayer — not protest — before the game. Strasemeier also told us that both the Navy and Tulsa teams were in the locker room during the national anthem, which is typical for college football.