Did Louis Armstrong Perform for his Wife at Pyramids and Sphinx in Egypt?

Armstrong performed across Africa, including a tour in Egypt, where he went to the Sphinx and pyramids. 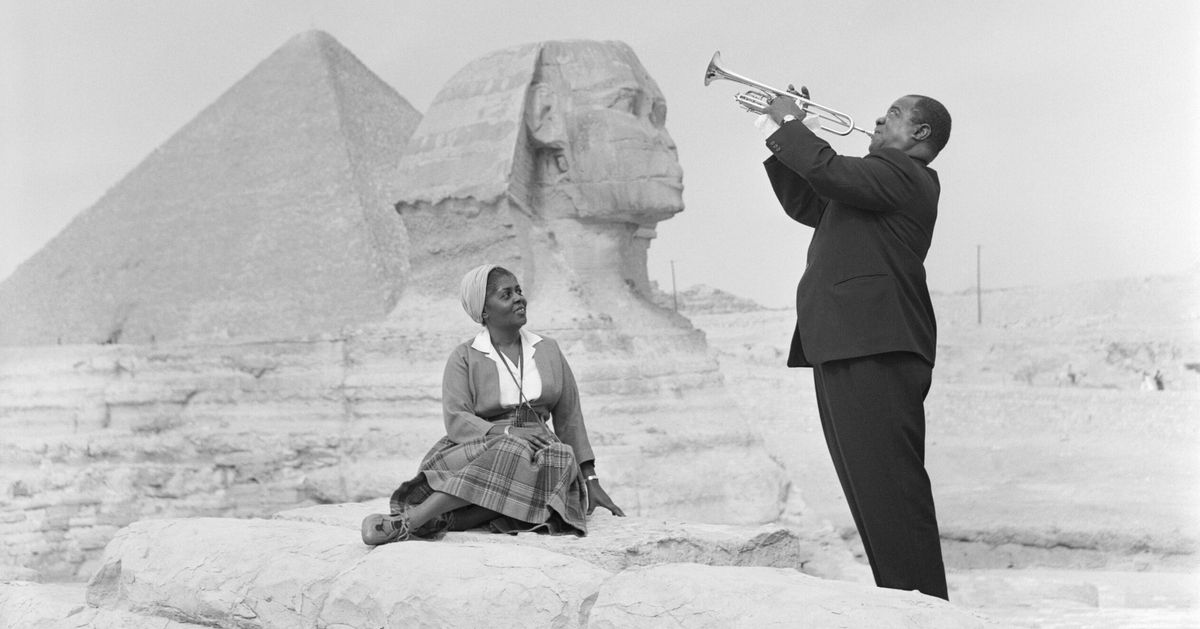 Claim:
A real photograph shows Louis Armstrong playing his trumpet for his wife, Lucille Wilson, in front of the Great Sphinx and the pyramids of Giza.
Rating:

His fame as a jazz musician and singer took him all over the world, including Egypt, where an iconic photograph showed Louis Armstrong serenading his wife in front of the pyramids and Great Sphinx of Giza.

The New York Times Store shared the photograph in 2016 on the anniversary of Armstrong’s death, saying it was taken in 1961:

But the full story behind the photograph was available in the virtual exhibition section of the Louis Armstrong House Museum, located in Corona, Queens. Armstrong and his wife Lucille lived in the house, which is now a National and New York Historic Landmark.

A post written by Ricky Riccardi, director of research collections, detailed how Armstrong’s trip to Egypt took place at the tail end of a State Department-sponsored tour of Africa that began in October 1960. During the tour one of his vocalists suffered from a stroke:

It was in Sierra Leone on January 16 that vocalist Velma Middleton suffered a paralyzing stroke. The band had to continue their tour and Velma was left behind, tragically passing away on February 10. Armstrong was devastated by the death of his longtime friend and got heavy criticism for leaving her but he defended himself by saying “the show must go on” and had obligations to perform in places he never had visited and would never visit again–including Egypt.

The museum shared photographs from the Armstrongs’ private collection, including one of the couple sitting together in Egypt, which Lucille called “Lovebirds on the Nile.” They also shared a receipt from American Express for a currency exchange.

He would meet renowned Egyptian archaeologist Kamal el-Mallakh, who was known for discovering the King Khufu Solar Ship near the Great Sphinx of Giza in 1954. Their personal collection had a photograph of el-Mallakh along with a note assumed to be el-Mallakh’s handwriting, with their names in hieroglyphics. El-Mallakh would take them to the pyramids where the photograph was taken:

Come January 28, Louis and Lucille wined and dined (and smoked) at Ambassador’s Reinhardt’s Reception and were then whisked by el-Mallakh and a small contingent to the location of the Great Sphinx of Giza, where the photos were taken that are now considered iconic. At some point in the day, Armstrong stopped off at an orphanage to play for the children of Cairo. After that, Louis had to get ready for his concert before departing Egypt the next morning for Nice, France, officially ending his grueling State Department tour.

The photograph is also available on Getty Images, and is credited to the Bettman archive.

Armstrong was reportedly gifted the scrapbook of the trip to Egypt, in which there are photographs of him, Lucille, and el-Mallakh taken at different angles in front of the Sphinx and pyramids. Riccardi assumes that the scrapbook was given by el-Mallakh.

Riccardi also speculated on the identity of the photographer:

Multiple photo outlets from the Associated Press to Getty claim ownership to this photo but no one credits a photographer, nor are any of the prints in this album stamped with any names (nor are the various other prints we have of the main Sphinx photo in our other collections). It appears the mystery might be solved in this little handwritten note: “Artin DerBalian c/o American Embassy, Garden Embassy, Cairo, U.A.E.” But in the left corner is another note clearly in Lucille’s handwriting: “Shot photo of us at Sphinx.” That seems good enough for us–thank you, Artin DerBalian for these immortal photos!

Armstrong only wrote “DIG US” next the photograph. “American jazz trumpeter Louis Armstrong plays the trumpet while his wife sits listening, with the Sphinx and one of the pyramids behind her, during a visit to the pyramids at Giza.” Getty Images, https://www.gettyimages.com/detail/news-photo/american-jazz-trumpeter-louis-armstrong-plays-the-trumpet-news-photo/514698678. Accessed 22 June 2022.