Are Under Armour Garments Flammable?

Clothing made from certain synthetic fibers has been known to exacerbate burns, but there's no indication that Under Armour's garments do not comply with flammability regulations. 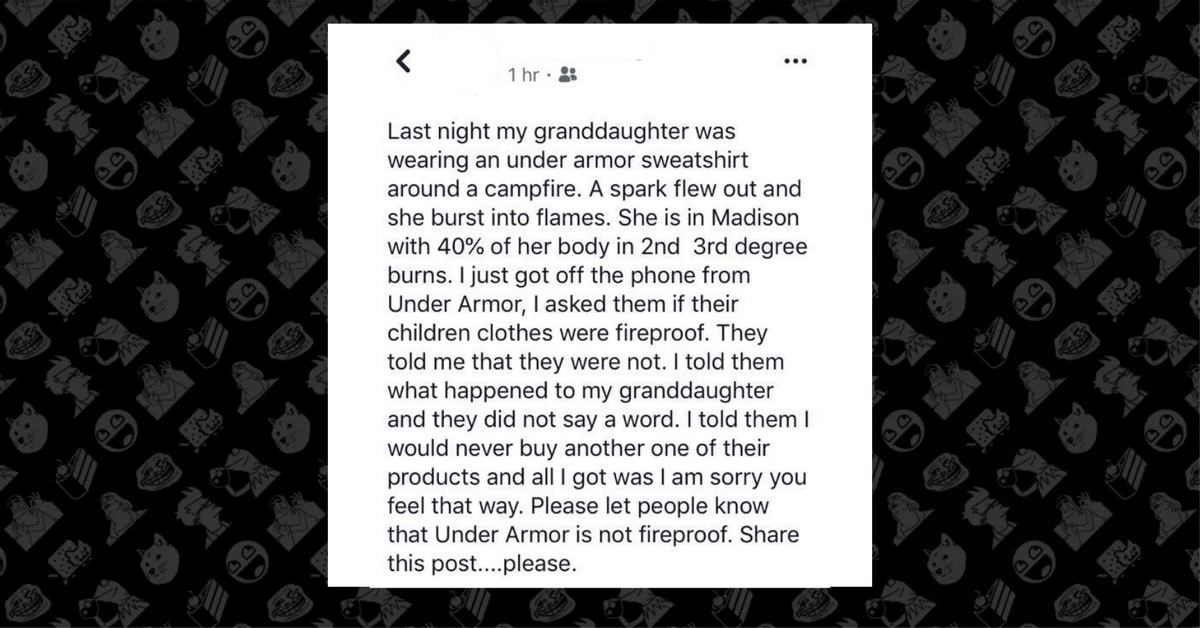 Claim:
Under Armour garments are more flammable than other garments of their type.
Rating:

In June 2018, a Facebook user shared a screenshot of another user's post about a purported incident involving flammable Under Armour brand children's garments: The original poster also shared an abbreviated version of the story to a public Facebook group:

The post questioned whether the brand's clothing was "fireproof," but since affordable, ordinary wear clothing cannot be made completely impervious to fire, government safety regulations for clothing typically address flammability (i.e., the speed at which clothes catch fire and the rate at which they burn once alight), with higher standards typically applied to children's sleepwear.

Relevant regulations came into effect with the U.S. Flammable Fabrics Act of 1953 [PDF, PDF], following a series of deaths in the 1940s related to rayon garments for children. A portion of the law pertained to classifications of the flammability of clothing, including baseline standards for general flammability in garments.

At the Act's inception the Federal Trade Commission enforced its provisions, then responsibility for enforcement was transferred to the Consumer Product Safety Commission (CSPC) in 1967. The CPSC established additional standards for "for the flammability of clothing textiles, vinyl plastic film (used in clothing), carpets and rugs, children's sleepwear and mattresses and mattress pads."

In April 2006, the Department of Defense confirmed that certain lines of synthetic clothing (including ones sold under the Under Armour brand) had been banned on Marine bases and camps in Iraq for posing a "substantial burn risk":

The ban on popular clothing from companies like Under Armour, CoolMax and Nike comes in the wake of concerns that a substantial burn risk is associated with wearing clothing made with these synthetic materials, officials said.

When exposed to extreme heat and flames, clothing containing some synthetic materials like polyester will melt and can fuse to the skin. This essentially creates a second skin and can lead to horrific, disfiguring burns, said Navy Capt. Lynn E. Welling, the 1st Marine Logistics Group head surgeon ... The Under Armour company, a favorite among many servicemembers here, advertises that the fabric used to make their garments will pull perspiration from the skin to the outer layer of the clothing. This, the ads say, allows the person wearing it to remain cool and dry in any condition or climate.

Separate testing found that synthetic garments from brands such as Under Armour tended to melt and could exacerbate burns [PDF]. Clothing recommended specifically for environments in which exposure to sparks or fires is common is known as "flame-resistant," but a manufacturer of flame-resistant clothing noted that even garments held to a high standard of fire resistance are not wholly "fireproof":

["Flame-resistant" clothing] means that the garment’s flame-resistant properties ensure it will resist catching fire, and if it does catch fire, it will not continue to burn once the source of combustion is removed. Flame-resistant clothing can and will burn when introduced to open flame from a flash fire, arc flash, combustible dust explosion or other fire sources. Remember, FR clothing is NOT fireproof. It is after the flame source is removed, that the FR “magic” happens. Flame-resistant workwear will not contribute to the severity of burn injury.

The CPSC has not announced any recalls we could find related to the flammability of Under Armour clothing, and we found no information to suggest the brand's items were not in compliance with federal regulations.

We contacted Under Armour and the CPSC for further information and received the following response from the manufacturer:

Thank you for your concern. [Under Armour garments are] not flame-retardant, unless specifically labeled that way. In fact, other than certain children’s pajamas labeled as such, very little clothing is flame-retardant. Accordingly, due to the unpredictable nature of fire, especially open flames, always exercise caution no matter what you are wearing.