Did Armed Delaware Students Scare Off a School Shooter in 1973?

A pro-gun rights meme gets some facts right, but it misrepresents the truth behind an old high school yearbook photograph. 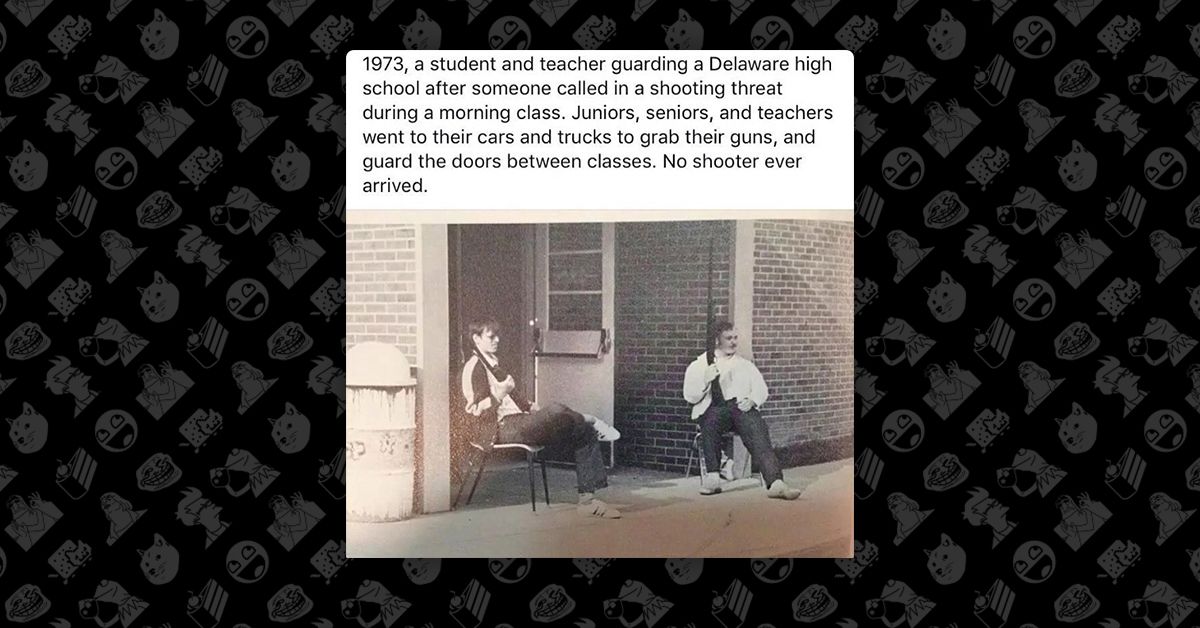 Claim:
A viral photograph shows an armed student and teacher scaring off a would-be mass shooter at a Delaware high school in 1973.
Rating:

The photograph was taken at a Delaware high school in 1973 and appears to show a response to a series of bomb threats.

The two young men were both students; there was no threat of a shooting, so the armed guard did not prevent a shooting; the bomb threats were hoaxes.

In the spring of 2018, an ongoing public debate over gun violence and gun control gained new intensity after a shooter at a high school in Parkland, Florida killed seventeen people.

Amid waves of online argument, an old meme re-emerged which claimed to give a historical example of "good guys with a gun" preventing a mass shooting.  A black and white photograph shows two young men sitting outside a building holding what looks like a rifle and a shotgun. The caption reads:

1973, a student and teacher guarding a Delaware high school after someone called in a shooting threat during a morning class. Juniors, seniors and teachers went to their cars and trucks to grab their guns, and guard the doors between classes. No shooter ever arrived. This narrative first emerged online in May 2016, when a Reddit user posted the photograph to the "Old School Cool" subreddit with the following description:

A student and teacher guarding the high school in my hometown in 1973. There was a shooting threat called in the morning. Students and teachers alike pulled their shotguns from their trunks to guard the doors between classes.

This description is not entirely accurate, though it does contain some elements of the truth. The photograph was indeed taken outside a high school in Delaware in 1973 — Caesar Rodney High School in Camden, to be precise. The two young men are both students, contrary to the claim that one was a teacher. Kendall Cool (on the left) and Carl Willoughby (on the right) were both seniors at the time.

As a result of research and inquiries made by Caleb South, who runs the "School Violence Exposed" web site, other Caesar Rodney alumni explained the background to the photograph in a Facebook group:

[In the] Spring [of] '73 we had a series of bomb scares at the time and Kendall and Carl brought their hunting rifles to the door for a photo op. I believe it was exam week and seemed like everyone knew when the bomb scares were coming in, totally upset the exam schedule...

The photograph made it into the school's 1973 yearbook, which also features headshots of Cool and Willoughby.

There was a series of bomb threats made to Caesar Rodney High School during that academic year, but they appear to have been made in the fall rather than the spring (although it is possible there was a second spate of scares later in the year.) According to an article in the Wilmington News Journal, there were "three or more bomb threats each day" over a three-day period during the first week of November 1972. "Each call resulted in an evacuation of the school's 1,600 students."

About a week later, police arrested three Caesar Rodney students — all juveniles — and charged them with making false bomb threats, the News Journal reported. We did not find any evidence that anyone had threatened to perpetrate a shooting (as opposed to a bombing) at Caesar Rodney at any point during the 1972-73 academic year.

This is indeed a photograph of two armed young men keeping watch outside a Delaware high school in 1973. However, beyond that, the "good guys with guns" narrative of the 2016 and 2018 meme begins to crumble. There was a series of bomb threats at the school that year, but they were hoaxes, and appear to have been no more than a teenage prank. Most importantly, there was no shooting threat, something that fatally undermines the rhetorical thrust of the meme. "No shooter ever arrived," as the meme dramatically concludes, because no shooter ever threatened to arrive.

As intimidating as Cool and Willoughby may have been, there is absolutely no evidence that their armed watch is the one thing that kept their friends and classmates safe.

Correction [19 June 2018]: This article previously misstated the name of the researcher behind the "School Violence Exposed" web site. He is Caleb South, not Caleb Smith.