Did Arizona GOP Rep. Ask 'If Masks Work, Why Weren't They Needed in AIDS Crisis?'

Joseph Chaplik was met with bemusement after remarks he made while advocating for a bill to exempt Arizona businesses from mask mandates. 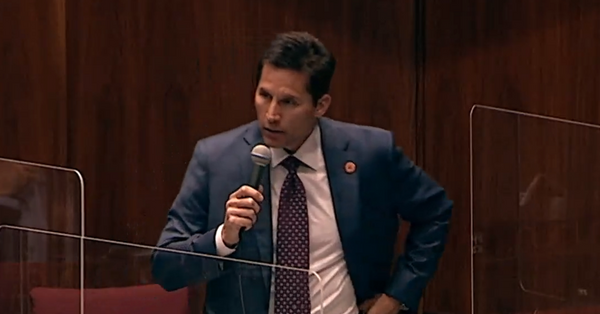 Claim:
Arizona State Rep. Joseph Chaplik argued against the effectiveness and necessity of face masks by pointing out that mask mandates have not been widely used to combat the spread of HIV.
Rating:

In March 2021, social media users shared widely a meme which claimed that Rep. Joseph Chaplik of Arizona had argued in favor of ending the state's mask mandate for businesses by questioning why mask mandates were not widespread in order to stop the spread of HIV in the 1980s.

On March 7, the left-leaning Facebook page Call to Activism posted the meme, which contained a photograph of Chaplik and the following text:

Arizona GOP Rep. asks if masks work, why weren't they needed during the AIDS crisis? Want to tell him? Chaplik introduced the bill in question, HB 2770, on Feb. 2, 2021. If implemented, it would introduce a blanket exemption from mask mandates for businesses in the state of Arizona. The text of the bill states:

"Notwithstanding any other law, a business in this state is not required to enforce on its premises a mask mandate that is established by this state, a city, a town or county or any other jurisdiction of this state."

The Arizona House of Representatives passed HB 2770 on March 3, and on the following day it was introduced in the Senate where, as of March 10, it was still under consideration.

After a House floor debate on March 3, during his closing statement, Chaplik made the following remarks, which can be viewed below:

You know, when I listen to all the counter-arguments — anywhere from seatbelts to head rests to "Masks saves [sic] lives" to on and on, "We're going to take the masks off everybody" — I look around at our society right now, and I've been out to eat, I've walked into restaurants, and the moment you sit at your table, every mask in the restaurant is off. Throughout the whole evening. And it's not just while I'm eating, it's throughout the whole evening of the hours open of that restaurant. Yet, nobody is dying in those restaurants from not having a mask on.

And when we talk about the argument of the flu and all the past viruses we've had, because as Dr. Friese said, "Masks saves [sic] lives and stops the virus." The polio, the smallpox, the measles, the typhoid, the HIV that was going to wipe our global destruction of human bodies with AIDS. We heard about that in the 80s. Yet no masks were required. [Emphasis is added].

"So let's see if we have this right: We shouldn't require businesses to comply with mask mandates to protect against COVID because they weren't needed in the 80s to stop the spread of AIDS? That's what [Joseph Chaplik] argues as House OKs his bill."

The reason that mask mandates have not been widely used as a tool to combat the spread of HIV is, of course, because HIV is spread primarily through bodily fluids, typically through sexual intercourse, and not through respiratory droplets.

Chaplik was endeavoring to argue against the necessity and effectiveness of mask mandates in combating the spread of COVID-19. In order to advance that argument, he pointed out that mask mandates were not implemented in order to combat the spread of HIV. However, since facemasks are irrelevant to the spread of HIV, that particular argument patently made no sense, hence the ridicule to which Chaplik has since been subjected.

The Call to Activism Facebook meme presented Chaplik's remarks as having come in the form of a rhetorical question: "If masks work, why weren't they needed during the AIDS crisis?"

As such, the meme fairly represented the substance of Chaplik's point, and we are issuing a "Correct Attribution" rating.

Later, Chaplik claimed he had been the victim of "out-of-context media smears," and posted a statement in which he apparently attempted to explain his remarks:

After an hour long debate on the house floor about whether government should mandate unconstitutional regulations, a list of several other past viruses were mentioned. Those included polio, smallpox, measles, HIV and Swine flu. In the early stages, we did not know how they were transmitted.

Yet, no masks were mandated in our communities, nor were businesses given mandates for enforcement. It is easy to look back now and say we all knew exactly how they were spread but the context was prior to having that knowledge.

That explanation also made no sense. We watched the entire March 3 House floor debate on Chaplik's bill. No participant mentioned polio, smallpox, measles, typhoid, or HIV until Chaplik himself did. It was therefore Chaplik alone who introduced comparisons with the spread of HIV into the debate, and it was the absence of basic logic underlying those comparisons which gave rise to the subsequent controversy over what Chaplik said.

One member, Dr. Randall Friese — a Democratic representative and trauma surgeon — addressed flu earlier in the debate, arguing in favor of the effectiveness of facemasks in combatting the spread of respiratory viruses:

"We know that masks work in stopping the spread of a respiratory virus. Flu — influenza — this year, cases are down 98 percent. Hospital admissions are down 98 percent for the flu, compared to just last year. Why? Because a lot of people are wearing masks, and masks are effective..."