Photographs supposedly show a cache of weapons confiscated from a site on the Arizona border. 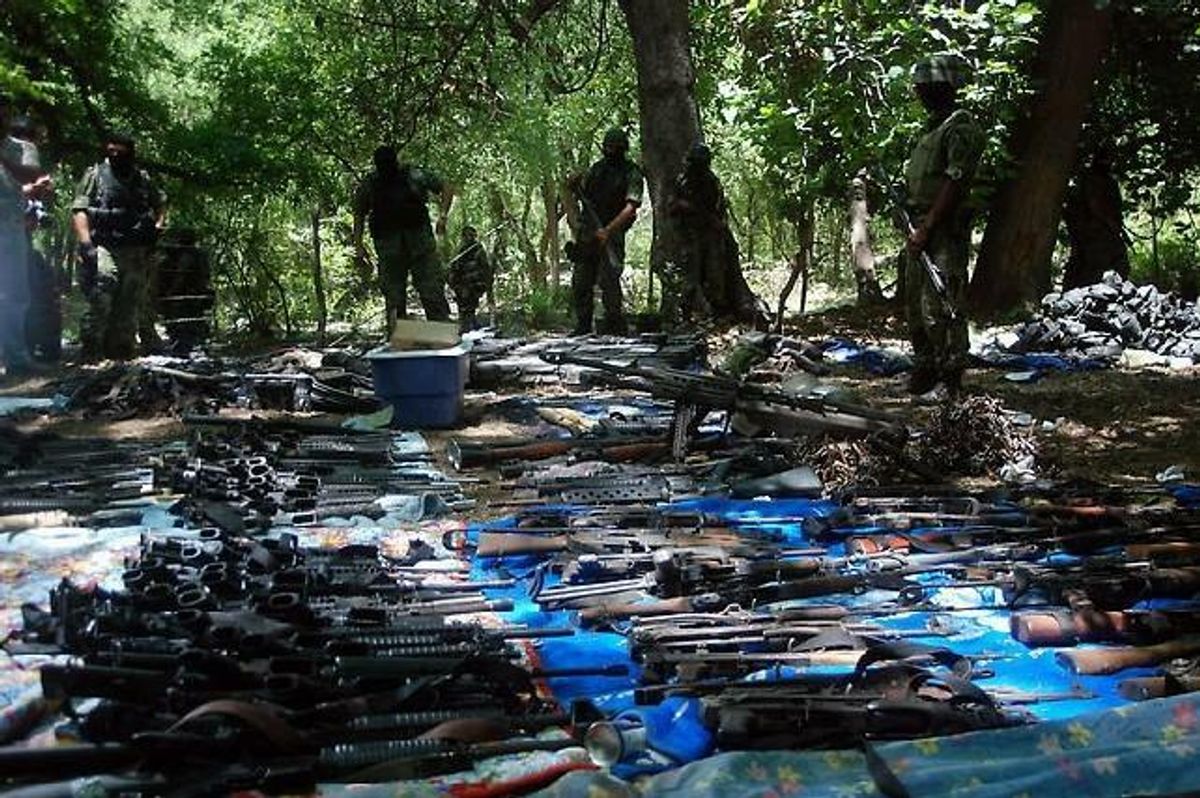 Claim:
Photographs show a cache of weapons confiscated from a site on the Arizona border.
Rating:

A set of photographs showing a large cache of weapons confiscated in a wooded area were circulated online along with the claim that the pictured arsenal was located on the Arizona border:

Just received an e-mail reporting that a huge arsenal was just located on the Arizona border along with many grenades, rocket launchers, hand guns, large SUVs full of weapons etc.

This seizure was five days ago. Located on the Arizona border!

Exactly where did you hear about it in OUR media ????? Thank God for the border patrol that this did not come over the border. There is one "graphic picture" but it tells the story Let's quit trying to decide who is violating our federal laws "to make a better life" — and ENFORCE the laws across the board on EVERYONE violating them - Nothing discriminatory about that amigos !!!!!!! These pictures weren't taken anywhere near the Arizona border, and the U.S. Border Patrol had nothing to do with the discovery or seizure of the pictured weapons.

As indicated by the Spanish-language captions on some of these photographs and confirmed in an article by the Mexican news agency Acencia Reforma), the pictures displayed above document a weapons cache which included more than rifles, grenades, grenade launchers, machine guns, rocket launchers, and hundreds of cartridges (as well as a dozen trucks containing "military and police accessories") seized by the Mexican army in during a raid on a makeshift camp used by a drug-smuggling crime ring in Higueras:

Newsweek reported that the captured weapons were part of a major training camp run by the notorious Zetas drug cartel, and that all of the weapons were believed to have been purchased in the United States:

The Mexican military has discovered a major training camp run by the notorious Zetas drug cartel and stocked with an arsenal of military weapons, including 140 semi automatic assault rifles and 10,000 rounds of ammunition — all of them believed to be purchased in the United States, U.S. law enforcement officials said.

Mexican officials have said the training camp was being run by Los Zetas, a ruthless paramilitary army of drug traffickers that was originally founded by renegade operatives of the Mexican special forces. The group is believed to have played a major part in the wave of violence that has killed 22,000 people since President Calderon declared war on the cartels in Dec. 2006. The arsenal was captured after the camp was invaded by Mexican Air Force helicopters and soldiers in land vehicles, sending about 50 Zeta operatives fleeing. Most of them, having been tipped off by the noise of the choppers, managed to escape into the mountainous area near the camp.

According to a U.S. law enforcement officer familiar with internal U.S. reporting on the raid, the items recovered by the Mexican military at the camp included 32 rifle grenades, four grenade launchers, assault rifles, assault rifles, one anti-tank launcher, 10,000 rounds of ammunition, 13,000 cartridge magazines, as well as body armor and two way radios. Although the rifle grenades and grenade launchers likely came from old military stocks in Guatemala or elsewhere in Central America, the official says, an initial inspection of the assault rifles’ markings suggests they all were purchased in the United States.

As a correspondent from Monterrey, Mexico, told us in reference to these images:

Higueras is a small town in Nuevo Leon, about from Monterrey and 70 miles south of the Texas-Mexico border. As you all know there is a drug war going on between the two main cartels, with them fighting each other and the Mexican Army fighting both of them. The Higueras raid was one of the biggest seizures of firearms in recent years, including about 50,000 usable assault rifle cartridges and around mostly and as well as grenade launchers, hand grenades, uniforms, emblems, and four stolen trucks.

The war is bloody and heavy. The cartels don't have more than 2000 at the very most, but as they are armed LIKE THIS. It is a war that will cost many lives, but Mexican authorities don't want to admit this is a guerrilla-style war, and history has taught us how much it takes to bring down an enemy that hits hard and hides.

Despite what is stated in the text that accompanies these photographs, the pictured weapons were not seized anywhere near the Arizona border. The raid took place in Higueras, which is in the northeastern Mexican state of Nuevo León, a state that has no border in common with Arizona. is completely within the country of Mexico save for a strip along its northern border adjacent to Texas, and Higueras is well south of that border, which puts the site of the raid several hundred miles southeast of the Arizona-Mexico border.