Are 871 Convicted Felons Currently Playing for the NFL? 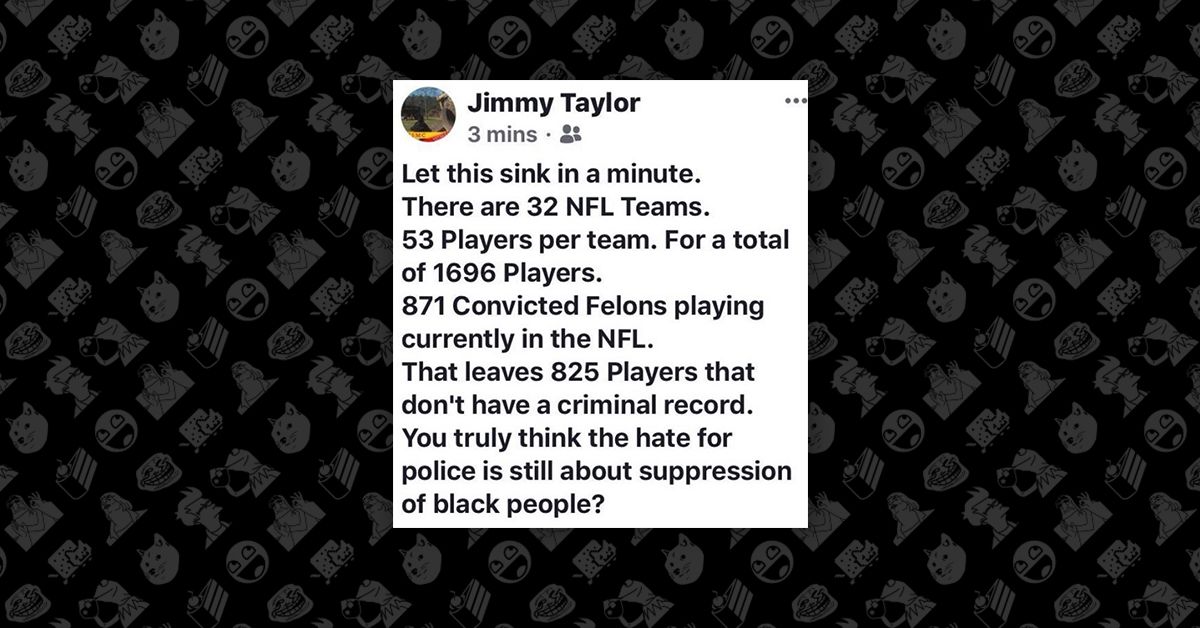 Claim:
There are currently 871 convicted felons playing for the NFL.
Rating:

In early October 2017, a meme circulated on social media with the apparent aim to paint the National Football League's players as criminals who are insincere in their kneeling protest during the national anthem: Because the meme does not cite any sources, it's unclear where its creators got the information to claim "871 Convicted Felons" are currently playing for the NFL. Unsurprisingly, that information is incorrect.

The only source we could locate that has a similar figure is a database created by USA Today sports reporter Brent Schrotenboer, who tracked down 870 arrests of NFL players going back to the year 2000. But a simple scan of the database reveals that many of the arrests were for misdemeanor charges — driving while intoxicated arrests make up the largest number. Others haven't been adjudicated yet, and in many of the cases in which a player was arrested, they were released by their teams, meaning they are in fact no longer playing.

In an e-mail, Schrotenboer told us the meme was wrong in every regard:

That meme is incorrect with just about every assertion it makes. There are 32 teams, but rosters are only limited to 53 players for part of the year, and even then, each team has an additional practice squad and players on injured reserve.

The arrests are overwhelmingly based on suspicion or charges of misdemeanor crimes, not felonies. DUI is far and away the leading charge.

As we’ve reported, based on our data, the NFL has a lower arrest rate than the general population.

As Schrotenboer noted, the idea that NFL players have a higher propensity to commit crime than the rest of the population has been debunked with research. A 2015 University of Texas, Dallas study found that NFL players actually have a lower arrest rate than population at large. According to a press release published by the university about the study's findings:

"The data show that the perception that NFL players are overly criminal compared to the U.S. population is false," [researcher and criminology professor Alex] Piquero said. “In fact, when you look at the forest and not the trees, the trends over the 14-year period show that the general population has higher arrest rates than NFL players do."

NFL players have been kneeling during the playing of the National Anthem before games in a protest started by then-49ers quarterback Colin Kaepernick in 2016. Kaepernick was protesting issues like the fact that African-Americans are roughly three times as likely as white people to be killed by police, and that they are incarcerated at a much higher rate. Since Kaepernick started the protest, it now includes other players on other teams. Since a deadly, racist rally in Charlottesville, Virginia, in August 2017, and an angry reaction to the protests by President Donald Trump the following month, it has grown to include non-athletes.

Trump in a September 2017 speech opined that team owners should fire protesting players saying, "Get that son of a bitch off the field right now ...He is fired." After those comments, some team owners protested as well, locking arms and kneeling alongside players.

Sandritter, Mark.   "A Timeline of Colin Kaepernick’s National Anthem Protest and the Athletes Who Joined Him."     SB Nation.   25 September 2017.